Sethaput Suthiwart-Narueput, founder and executive chairman of think-tank Thailand Future Foundation, has worn many other hats. He started his career with McKinsey & Company and put in a 10-year stint with the World Bank. He is managing partner of Advisor Co., a corporate advisory firm, and co-author of a recent report – “Thailand’s New Normal.” Suthiwart-Narueput argues that even if Thailand were to come out of the doldrums, it is unlikely to return to the growth rates of the previous decades. The recovery will be of a lower and slower trajectory — Thailand’s “new normal.” 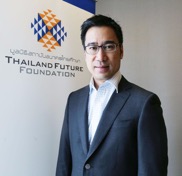 In the 1970s, when its neighbors — Myanmar, Laos, Cambodia and Vietnam — were mired in war, civil conflicts and Cold War intrigues, Thailand was plotting its economic future. From the early 1980s to the late 1990s, just before the Asian financial crisis, Thailand was known as a Teflon economy — one that could continue to attract foreign tourists and money despite political turbulence. With nearly two decades of double-digit growth, Thailand transformed itself from an agricultural economy to a modern industrial powerhouse.

Today, that dynamism has faded. A decade of political instability and sometimes violent protests since 2006, culminating in last year’s military coup, has finally taken its toll, with Thailand’s economy seesawing between lackluster and negative growth. When former general Prayuth Chan-ocha seized power on May 22, businesses thought it could see light at the end of the tunnel. But in the months after the coup, disappointing data showing weak exports, tepid public and private spending, falling prices in farm goods and falling domestic consumption have dashed these hopes. The general economic slowdown in Asia, radiating from China, does not help.

Thailand’s real gross domestic product (GDP) growth last year, at 0.7%, was the lowest rate among ASEAN countries. The downtrend looks set to continue this year. Exports fell by 4.9% during the first half of the year and manufacturing fell 0.7% in the second quarter. Looking ahead, the picture is even gloomier.

As Suthiwart-Narueput says in this interview with Knowledge at Wharton, the land of the white elephant has clearly lost its mojo. Suthiwart-Narueput also discusses structural headwinds — an aging population, declining labor force, low productivity and strong competition from other ASEAN countries.

Knowledge at Wharton: In a background paper, “A Nation in Decline?,” published by your organization three years ago, the question was asked whether this would be Thailand’s “lost decade,” a decade of under-performance, just as the Philippines experienced in the last quarter of the 20th century. Three years on, does that question still apply?

“One problem that has been a perennial issue in Thailand is our ability to execute.”

Sethaput Suthiwart-Narueput: The short answer is yes. In terms of our long- term outlook the question remains valid. If we’re able to tackle the deeper, longer-term structural issues that we have left unaddressed, the outlook might be more positive. We’re likely to face what the Philippines did.

Knowledge at Wharton: The report “A Nation in Decline” argued that Thailand’s economic gains today are the result of efforts and policy decisions made in the 1980s. What’s currently in place to lay the groundwork for the next 10 years of growth and prosperity?

Suthiwart-Narueput: It’s not clear whether we are making the kind of decisions that will secure our future like we did in the past. If you go back to the 1980s, there were three things that we did that were clever back then: the Eastern Seaboard, FDI (Foreign Direct Investment), and tourism in Phuket. The fact that we have a significant petrochemical factory is largely because of the investment on the Eastern Seaboard; petrochemicals are an important export for us. The FDI that we got helped us build our auto industry, which is one of our more competitive sectors. Tourism is obviously a great supporter of incomes in Thailand. A good chunk of the labor force is tied either directly or indirectly to tourism. So things that we have today are the result of those decisions taken in the past.

The question is: what decisions are we taking today? It’s not very clear. When you look at what we have done over, say, the past 10 years, regardless of which government was in power, most of the policies have been geared towards the demand side, stimulus measures, populist-type measures. Policies focused on the supply side — on enhancing our productivity, on longer-term issues of competitiveness, on developing new sectors along the lines that was done back in the 1980s — we haven’t seen those.

Knowledge at Wharton: Why is that?

Suthiwart-Narueput: One problem that has been a perennial issue in Thailand is our ability to execute. There have been talks for a very long time about these … large-scale infrastructure projects linking up with the region and our rail connections in the Mekong. The problem is getting these things done. Every government that comes along talks about big projects, mega projects. There’s a plan for everything here. The question is the ability to execute them.

Knowledge at Wharton: What precisely is the problem with the execution? It’s not the lack of funding?

Suthiwart-Narueput: Funding is not a huge issue. Public finances are reasonably strong. It’s got to do with a couple of things. One, the government is changing quite frequently …

Knowledge at Wharton: Today, your competitors like Vietnam are far more competitive, and capable of taking business away from Thailand.

Suthiwart-Narueput: We’ve lost share, both on the trade front and on the FDI front. We’re not as attractive and competitive a place as before. A good chunk of that is caused by the fact that our wages have gone up a lot … and our productivity growth has not kept pace. So it has made our unit labor cost uncompetitive, particularly in sectors like electronics.

“Thailand’s economy is recovering, but … at a slower and lower growth trajectory…. It’s … like what happened after the Asian Crisis … the economy recovered but never recovered its mojo.”

If you look back 15 years, Vietnam was literally nowhere. They didn’t even export any electronics. But if you look recently, electronics exports from Vietnam are higher than those from Thailand. And we have seen examples of firms relocating away from Thailand. Samsung television, for example, they’re shutting down their production of TVs here and moving it to Vietnam. And the reason the Japanese are moving their factories to Vietnam is because they’re cheaper.

Knowledge at Wharton: How do you think the slowdown in China is going to affect Thailand’s economy?

Suthiwart-Narueput: A lot of analysts talk about how our export structure is fairly similar to that of China’s, so if China slows down or the renminbi depreciates, we would face increasing competition and pressure. But the channel that worries me the most in terms of China’s slowdown and the impact on Thailand is not so much on the export front but commodity prices. The reason is because 30%-plus of our labor force is still tied to agriculture, so when farm prices come down, it puts a lot of pressure on household incomes.

If you look at the main farm incomes, it’s from rice, rubber and sugarcane — all those three things are under pressure right now. Rice — we have these big overhangs in terms of stock from the government rice scheme. Rubber — when oil prices are low, rubber tends not to do so well, and oil prices are now quite low. Sugarcane prices are also under pressure because of Brazil. When the Brazilian real depreciates, it puts pressure on global sugar prices, because Brazil ends up exporting a lot more sugarcane instead of using it for ethanol. That’s happening already, so it’s whole complex of foreign prices.

Knowledge at Wharton: A perfect storm?

Suthiwart-Narueput: In a sense. China has a big footprint in commodity prices, so when China slows down, we will get hit. The other channel that would have an effect on us but — touch wood, not so far — is tourism. A lot of our headline growth, almost all of it actually, in tourism in Thailand has come from China.

Knowledge at Wharton: Let’s talk about the new normal, the title of your latest report on the Thai economy. What are the findings?

Suthiwart-Narueput: Thailand’s economy is recovering, but we’re recovering at a slower and lower growth trajectory than before. It’s kind of like what happened after the Asian Crisis, where the economy recovered but it never recovered its mojo — the growth rate before the Asian Crisis. There are a bunch of reasons for that. Some of them are cyclical, but a lot of it is structural.

If you look at our growth rate in the previous decade, we were averaging about 5%. Our estimate for the long-term growth rate for the remaining decade is something close to 3%. Why? We start with the very basic. Our demographics are not good, to put it mildly. If you look at our previous decade, our labor force growth was clocking 1.2% per annum; this decade it’s down to 0.2%. So you have already lost 1%. On top of that, we have this slowdown in productivity growth of about another 60 basis points. So if you add those two numbers up, you shave about 1.6% off headline GDP growth.

Thailand has not seen “policies focused on the supply side — on enhancing our productivity, on longer-term issues of competitiveness, on developing new sectors along the lines that was done back in the 1980s….”

There are demand-side factors as well. I won’t go through all the gory details but will put my finger on one of the more important ones. As you mentioned, our exports have not been doing well, and if you look at the explanations offered by the ministry of commerce, they tend to say, oh yeah, the global economy has not recovered, the baht has been too strong, therefore exports haven’t done well. The danger with that assessment is it makes it sounds like temporary factors — that once the global economy recovers, once the baht weakens, we can go back to our glory export days. The short answer is we can’t, because they’re structural changes.

Some of the structural changes are changes that have to do with the world and are not specific to us. One thing that has affected not just Thailand but other countries in Southeast Asia, is that global trade isn’t growing as fast as it used to. Before the 2008 financial crisis, each percentage point of growth in global GDP translated roughly to 1.5% growth in global trade. That is now down to 0.3%.

Knowledge at Wharton: When did things go downhill for Thailand?

Suthiwart-Narueput: 2011 was a critically bad year for us in Thailand. We had the floods and wages started rising very rapidly. So it was a double whammy. It’s hard to disentangle the data, to say which one was more significant.

One thing that hit investor confidence quite a bit was these big floods. It was an act of God. We can’t control that, but what we can control is our ability to respond to it. We said we would execute this flood management project but we haven’t delivered. So if you talk to people, you will hear what needs to be done. But, as I have said earlier, the problem is getting it done. We’re back to execution.