Selling Cambodia, a country known for its killing fields, landmines and chronic poverty, is a tough job. But Chanthol Sun, minister for commerce, says it’s very easy when “you talk from the heart.” The 59-year-old, U.S.-educated, former General Electric executive points out that Cambodia has a lot to offer to international investors: political and macroeconomic stability, a pro-business government, competitive investment incentives and a great location. Referring to the people of Cambodia as his “shareholders,” Sun says, “They have suffered long enough. It’s time for Cambodia to grow … it’s time to for us to move forward.”

Born in 1956, in Koh Thom district in the Kandal province, Sun lost his mother and brother to the Khmer Rouge. The rest of his family escaped to Thailand. In 1973, Sun went to the U.S. with $50 in his pocket. He returned to Cambodia in 1994 and helped set up the Council for the Development of Cambodia. Elected to the Cambodian National Assembly in 2003, he was the minister for public works and transport from 2004 till 2008. In September 2013, he took on his current responsibilities as minister of commerce.

In a conversation with Knowledge at Wharton, Sun talks about his faith in the future of Cambodia and what motivates him as an individual.

As edited transcript of the conversation follows.

Knowledge at Wharton: Of all the ASEAN countries, why would an investor chose Cambodia instead of, say, Thailand, Indonesia or Vietnam?

Chanthol Sun: I can give the investor a few good reasons. At the top of the list is political stability. It’s important for investors to invest in a country that is politically stable. We had a little hiccup in the elections of 2013 — the opposition boycotted the national assembly for 10 months — but that’s all sorted now. Today, politically, Cambodia is very stable.

“Foreign investors and local investors are treated equally in Cambodia.”

Third, Cambodia’s government is a pro-business government. We consider the private sector as the engine of our economic growth. We have created what we call the “technical working groups,” co-chaired by the private sector and ministers in the Cambodian government. Technical working groups on infrastructure, banking, tourism, culture, so on and so forth. These technical groups work together on a regular basis to resolve any problems that the private sector might have. If they cannot resolve these problems, they can escalate them to what we call the “government private sector forum,” chaired by our prime minster. Once a year, he invites the private sector — 300 representatives, plus the diplomatic corps, the ADB [Asian Development Bank], World Bank, IMF [International Monetary Fund] — to this forum, and they can raise any problem with the prime minister. He can make a decision right there. 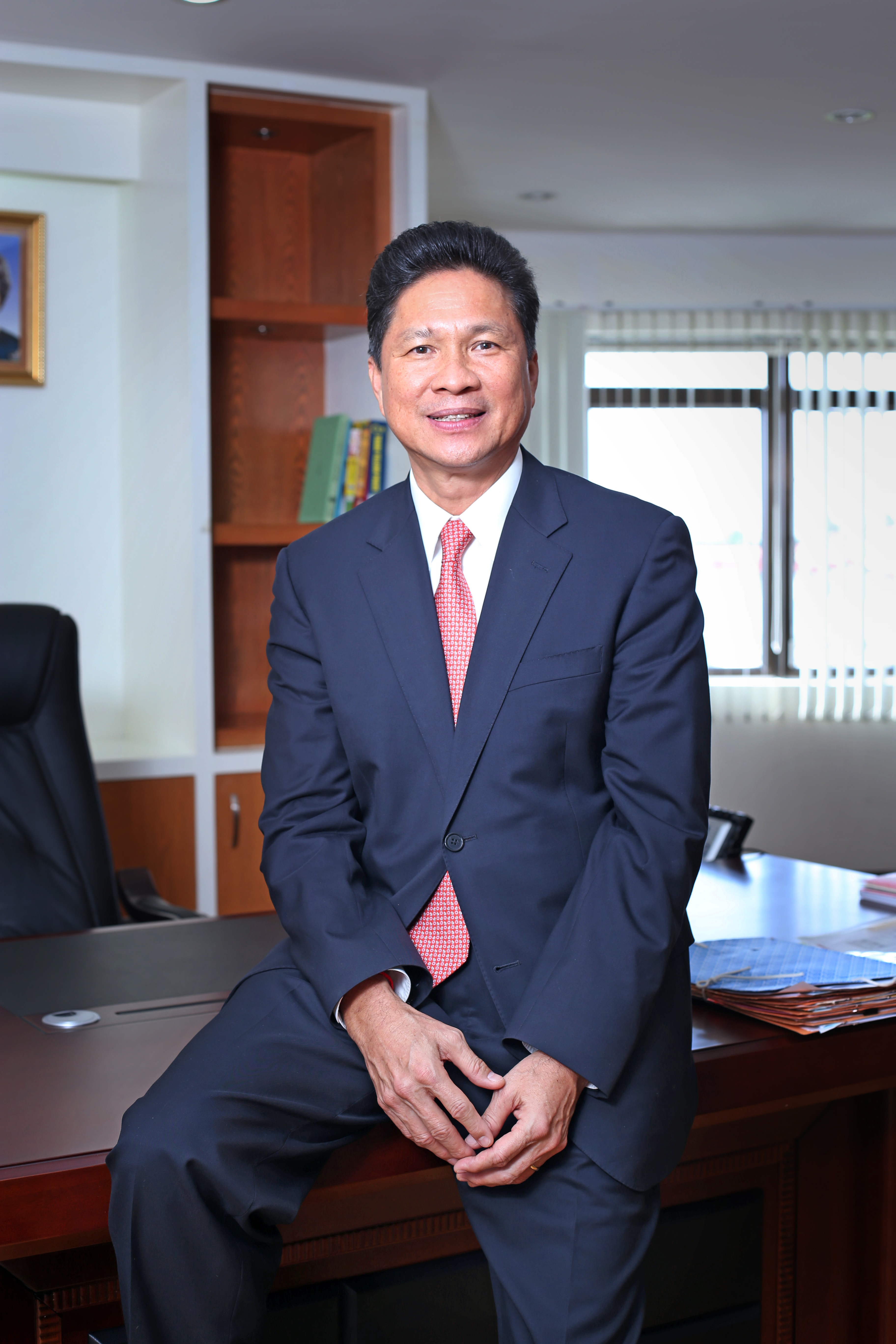 Four, the competitive investment incentives. Our investment laws provide very generous incentives to investors. Our corporate income tax is only 20%. There is no exchange control in Cambodia. There’s no restriction on any sector because there is no alien business law. Every economic sector is open to a foreign investor. Tell me, which country allows foreigners to own 100% banking license, 100% ownership of the telecom sector, of agriculture — every sector? Foreign investors and local investors are treated equally in Cambodia.

Last, location, location, location. Cambodia sits at the heart of ASEAN. If you get on a plane, within one-and-a-half hours’ flying time you reach 600 million consumers. When I pitch to the investors, I say, don’t come to invest only in Cambodia with its 15 million consumers. Look at ASEAN as a whole, or at least the GMS [Greater Mekong Subregion], which consists of Cambodia, Vietnam, Laos, Myanmar, and Yunnan Province [China] — that’s 220 million consumers. Or, just look at three countries, Cambodia, Vietnam and Thailand — [Cambodia is] right in the middle. So in shipping, in transportation, we could be part of the regional supply chain. We have a dynamic population — the median age of Cambodians is 24.1 — so 35 years of productive labor.

Knowledge at Wharton: What about the weaknesses?

Sun: I would lie to you and to myself if I didn’t mention the weaknesses. One of the issues facing the Cambodian economy today is shortage of a skilled labor force. We need to improve the skilled labor force in the economy. Education needs to pay more attention to technical vocational training. Second, although the infrastructure is improving, our logistic costs are a little high compared to neighboring countries. Third, the price of electricity [in Cambodia] is still higher than neighboring countries. Having said that, the Cambodian government has addressed the issue by building a lot of hydro-power plants. Today we import [electricity] from Thailand, Laos and Vietnam, but in three years we should be self-sufficient. Another area [of weakness] is the unofficial cost of doing business.

Knowledge at Wharton: For people who are unfamiliar with corruption in Cambodia, could you explain how it works?

Sun: Let’s say the fee for processing a document is US$30. Normally it would take two working days, but the person might drag it to five days. If you give him a little payment for “coffee” or “tea,” he can process the paper faster. That’s why we put this process online, to take away the physical interface, to eliminate the interface between the government official and the private sector.

Knowledge at Wharton: Let’s move on to ASEAN. The ASEAN Economic Community (AEC) is scheduled to come into play later this year. Critics say that Cambodia is not ready to join the community because of the skilled labor factor you just mentioned.

“One of the issues facing the Cambodian economy today is shortage of a skilled labor force.”

Sun: There is a mismatch today, between what we produce from our universities and what the private sector needs. We produce a lot of accountants, PhDs, MBAs, but the private sector says, look, all we need is mechanics, electricians, carpenters. That’s technical labor training….

But it’s a strange question: Whether we are ready for the AEC? What do you mean we’re not ready? We are already part of ASEAN. What does it mean to be ready by December 31? Are there going to be any change? Nothing. Nothing at all. Except that goods and services can be shipped across ASEAN more easily than before. Apart from that, I don’t see anything different from today.

The Cambodian government has just launched the Industrial Development Policy 2015-2025 that will bring Cambodia to the next level of economic development. We want to move away from a labor intensive industry to a semi-skilled industry, to light manufacturing, food processing, component and electronic assembly. We want to move from a low-income country to a middle-income one by 2030, and a high-income country by 2050. That is the goal and vision of our government. Today, 80% of our population is farmers. By 2030, by 2050, it will be less than 50%. In Cambodia you will see a light manufacturing country. We are going to be part of regional supply chain. We are going to be part of the global supply chain.

Knowledge at Wharton: Cambodia is a founding member of the new infrastructure bank from China, the Asian Infrastructure Investment Bank (AIIB). How important is it for the region?

Sun: I think it’s very important for ASEAN and very important for Asia. ASEAN established the massive plan on ASEAN connectivity that calls for a funding of US$70 billion a year for the next 10 years. Asia needs around US$8 trillion to improve its infrastructure. The World Bank and the Asian Development Bank (ADB) cannot finance the entire infrastructure [funding]. We welcome the AIIB as an alternative or additional source [from] where we can get loans to build our infrastructure.

Knowledge at Wharton:Why do you think America is opposed to it?

Sun: I can’t speak for America, but today they are completely isolated. All the U.S. allies — Korea, France, Germany, even Australia — rushed in to become a member before the March 31 deadline. Only Japan and the U.S. have stayed outside. I think the world has changed. We need to recognize the influence of China. When China prospers, neighboring countries, the world, also prosper. Consider the financial and economic crisis of 2008. Imagine if the economy of China also collapsed like Europe, like America. We would not have anybody to help the world grow again. Can you imagine it – if the U.S. economy, Europe economy, Chinese economy, Indian economy all collapsed at the same time?

Let me put it this way. Let’s say, you have been starving, you’ve had nothing to eat for 30 days, or 30 years in the case of Cambodia, then comes this Chinese guy with a bowl of fried rice for you and says, “You are hungry; here is fried rice for you.” And then, you hear another guy who says, “Don’t eat. Why do you eat fried rice from the Chinese?” I would say to this guy, “You give me a Big Mac. If you give me an alternative – Big Mac versus fried rice – then I have a choice. But if you don’t provide me with the Big Mac when I’m starving and you tell me not to eat the rice, then I’m sorry, [I can’t do that].”

And that is why we go to China for funding. We want funding. That’s why we borrow from China, from Korea, from Japan, from ADB, from the World Bank. Money doesn’t have any color for us, as long as we can borrow and build our infrastructure and improve our country.

Knowledge at Wharton: Speaking of America, you were educated in the U.S. In the interview you gave to CNBC, I can’t remember another politician from Cambodia — not since Sihanouk [Norodom Sihanouk, former king of Cambodia] — who looks so comfortable in front of the camera. Is this a product of your American upbringing and education?

Sun: The education and the private sector experience helped me to deal with the media. But, when you talk from the heart, you have nothing to hide — it’s very easy.

Knowledge at Wharton: What’s coming from your heart at the moment?

Sun: What drives me, what gives me the motivation to work so hard, is Cambodia. I look at it this way — when [you] work for the private sector, you work to increase the share value of the shareholders. Do you know them? Do you talk to them? You meet some of them. But when I work for Cambodia, I work for my shareholders, whom I see every day on the street — men, women, children. They are my shareholders. They are my shareholders. They give me the motivation, the drive, the energy, to work hard to improve their standards of living. They have suffered long enough for 30 years. It’s time for Cambodia to grow … it’s time to for us to move forward.