Residential flood insurance is more important than ever as climate change gives rise to widespread forecasts for more serious flooding in the United States because of stronger storms and rising sea levels. The federal government has been the carrier for nearly all home flood insurance for almost 50 years, but that is beginning to change as private insurers take a growing market share, up from the current 5%.

What will that mean for policyholders and the market more generally?

Some analysts suggest that, on balance, any risk reduction brought by the private sector will be positive though the expansion of consumer choices and products offerings. Others say private carriers might cherry-pick low-risk – or poorly priced — policies from the federal National Flood Insurance Program (NFIP) and that will weaken it. Yet others worry that any cutback in the federal commitment to NFIP could ultimately reduce preventive measures, such as mapping areas most at risk.

What’s clear is that many families who underrate the risk of flooding can suffer enormous losses. After hurricane Harvey in 2017, for example, the average residential insurance payout was $120,000, while those without insurance received an average grant of just $4,300 from FEMA. Despite such potential risks, only about 30% of those living in a 100-year floodplain today carry flood insurance.

And what does it all mean for the future? A new study by the Wharton Risk Management and Decision Processes Center, “The Emerging Private Flood Insurance Market in the United States,”  looks at these issues, including how private insurers could help close the flood insurance gap, the types of policies they are issuing and the potential limits to the private market. It also considers what measures could encourage more people to buy insurance, such as including flood coverage as part of general homeowners policies, rather than today’s practice of having separate policies.

One of the co-authors, Carolyn Kousky, director of policy research and engagement for the center, spoke with Knowledge at Wharton about the highlights of the study in the podcast above. You can also download a copy of the report from this page.

The Emerging Private Flood Insurance Market in the United States 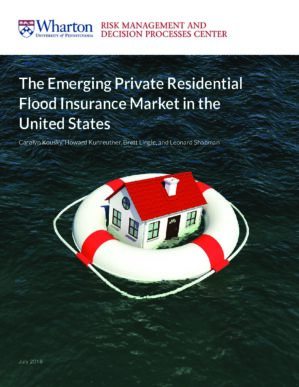