Chip Heath explains how companies can do more to create defining moments for their employees and customers. 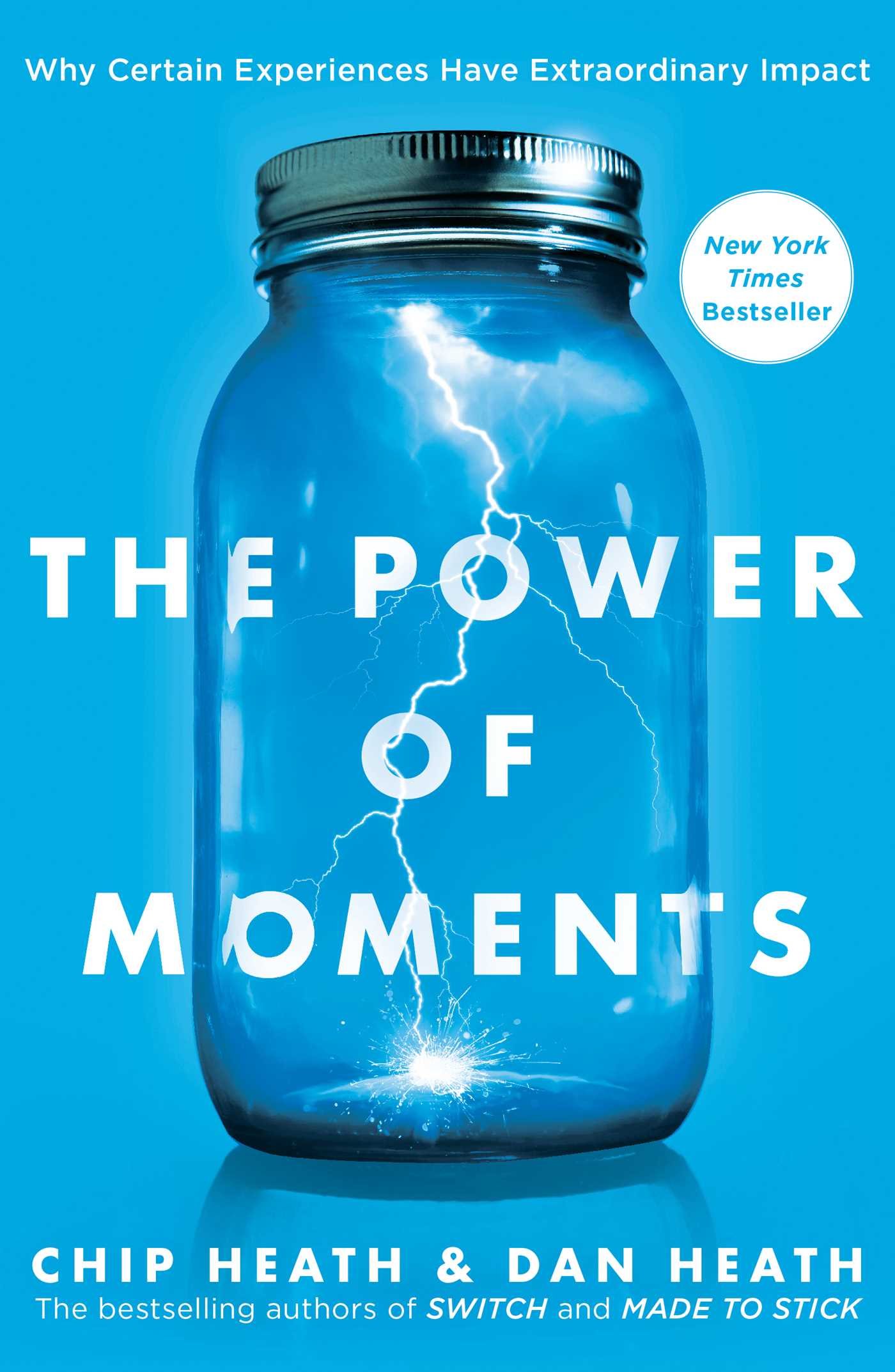 Life is an endless blur of work, commuting, parenting and laundry. But there are those rare and delightful moments that stick in our memories and define our lives. It could be a delicious dessert you ate in a Parisian cafe while on vacation or that time you were singled out in class for achieving the highest test score. Chip Heath, a professor at Stanford University’s Graduate School of Business, has written a book with his brother, Dan Heath, a senior professor at Duke University’s Center for Advancement of Social Entrepreneurship (CASE), that examines the importance of moments in both life and work. The Power of Moments: Why Certain Experiences Have Extraordinary Impact explains how companies can do more to create defining moments for their employees and customers, which can lead to greater satisfaction and boost the bottom line. Chip Heath joined Knowledge at Wharton to discuss the ideas in the book.

Knowledge at Wharton: Tell us how you and your brother came up with this topic.

Chip Heath: It occurred to us at that we get lots of experiences in life, but very few of them are memorable. We may have eight days of vacation but only two or three things that we remember later on. People have done studies with college students and found out what they remember. It turns out that 40% of our memories are in the first six weeks of freshman year because that’s when all the new stuff is happening. It’s a new place with new friends and the chance to go out and have a party at night and not have to report in to mom and dad at the end of the evening. But junior year is kind of a black hole of memories. Nobody remembers anything from junior year. If we can remember only parts of things, it occurs to us that it would be nice to have some tools for thinking about what are we going to remember and what’s going to be meaningful to us later on.

Knowledge at Wharton: Do you think people recognize defining moments when they happen or in retrospect?

Heath: We’ve asked people about this in our research. About half the time, people say, “Oh, I knew it at the time. I knew this was going to be one of those moments that I would remember forever.” And half the time, it only occurs to us in retrospect. I don’t think science knows what are the characteristics of those two things, but I think there are some general principles that make things memorable both now and in the future.

Knowledge at Wharton: You name those principles as elevation, insight, pride and connection. Take us into how those are important.

“We get lots of experiences in life, but very few of them are memorable.”

Heath: If you build more of these principles into your moments, you’re going to have better memory. At birthday parties, we’re really good at connection and elevation. We connect people to the friends that they have. We invite our best friends over and have moments of elevation. There are presents that we give, special things that we eat. A birthday cupcake is the most compact form of elevation possible. We’ve got sugar, fat and flame in the same object.

We’re good at those things, but think about pride. I don’t think we use pride nearly enough. Some families are smart enough to mark off the heights of their kids on the door frame as they grow up. Every year, you report in and see you grew an inch since last year or two inches. It’s a moment of pride. We don’t really say things for math assignments or TV shows. If I were to look back two years later and say, “Oh, I can’t believe I used to watch ‘My Little Pony,'” or “Look at the easy math that I was doing just a year ago,” I think there are these chances that we have to fill the principles into the moments that we have. If we were better at recognizing people at work and giving them those moments of time, I think employees would be much happier.

Knowledge at Wharton: You write in the book that the first day of work is a missed opportunity by the company to make a greater connection with a new employee. What do you mean by that?

Heath: It’s a huge missed opportunity. Most people show up for work on the first day, and people are happy to see us but thought we were coming in early next week. Our cubicle’s not quite ready, and the computer’s not wired up. There’s a group at John Deere in India, where they face a really competitive labor market for engineers. On the first day, a new employee is met by a friend they had been corresponding with who shows up with a favorite beverage, and they walk to their cubicle. It’s already set up. In fact, the first email is from the CEO of John Deere, who talks about the legacy that we have, 175 years of innovation. The fact that we’re making products that make people food and give people shelter, so we’re doing important things for the world. He welcomes people to their first day. On the desk is a model of the first file that John Deere ever patented. It was a plow that you could pull behind your oxen or your horses that didn’t get caught up in root systems when you were plowing a field.

You wander through the day that they plan, and you’ve connected with your colleagues, you’ve connected to the meaning of the organization. I think there are very few of us that went through that orientation in their last job. Wouldn’t it have been wonderful if we had?

Knowledge at Wharton: You also talk about how important it is for the hospitality industry to create moments for customers. You gain that loyalty so that customer will come back. That is a huge impact on the company.

Heath: Yes, it’s a huge impact. I think Disney is a master at it. One of the things to notice about the Disney experience is that moments really do matter, and peak moments matter. I love the roller coaster at Space Mountain; it’s probably my favorite roller coaster in the world. It’s a great roller coaster even if it weren’t enclosed inside a dome where it’s completely dark. They feature stars up on the roller coaster, so you feel like you’re zooming through the asteroids and narrowly dodging the meteors. It’s an amazing ride, but it takes 2.5 minutes. You spend 60 minutes waiting in line up to that point, but nobody remembers the wait in retrospect. You remember the 2.5 minutes of peak pleasure. When we’re designing experiences, we like to keep in mind that what we’re going for is not a 7 out of 10, not an 8 out of 10, but more like a 9 or a 10 out of 10.

I think hotels miss this all the time. You walk into a hotel, and they go through an elaborate greeting ceremony where they hand over your keys and point you to the elevator. But you walk into the room, and there’s maybe a snack bar there, but it’s got the same foods as every other snack bar you’ve been at, and it all costs and arm and a leg. In my case, you walk into a hotel room in New Orleans, Louisiana, and you have a special beverage and a dessert that’s native to New Orleans and gives you a sense of place. But it’s different than the one that you had in Austin, Texas, or the one that you had in St. Louis, Missouri, or in San Francisco, California. It seems like the expenditure for it can’t be all that hard. Yet they’re systematically charging us an arm and a leg for food that’s not quite interesting or experiences that aren’t interesting.

I think Doubletree is one of the few places who get this right with the warm cookie that you get at check-in. I love Doubletree. Every time I get a chance to stay at one, it’s just a heartwarming moment.

Knowledge at Wharton: You also relay an interesting story about Southwest Airlines turning the safety announcement on flights into something fun.

Heath: If you’ve ever been on Southwest Airlines, there’s a chance that you might have encountered a funny flight safety announcement. It’s a boring routine that we go through at every flight. If you hear some of the lines that they use: “There might be 50 ways to leave your lover, but there are only six ways to leave this Boeing 737. Wear your seat belt low and tight across your lap, like my grandma wears her sports bra.” Or this is my favorite: “If the oxygen mask should drop, affix your oxygen mask first, then help any children who may be traveling with you. And if you’re traveling with one more child, you may have to think about which one has the greater potential.” These are the lines that get good applause. In fact, they’re presented on placards outside the corporate cafeteria.

“Very often, to be memorable means breaking the script.”

We looked at the effect on passengers of experiencing a funny flight safety announcement. If you’ve been on a flight with one of these announcements, you’re likely to take an extra half a flight in the next year, controlling for all the variables. How much is that worth to Southwest Airlines? About 1.5% of all flights had one of those announcements. What if we doubled it to 3%? That would still be pretty rare — only one in every 30 flights or so. But the answer was, it puts $138 million on the bottom line. That’s an astonishingly high contribution. It’s the equivalent of buying two Boeing 737 jets a year.

Knowledge at Wharton: There’s also a correlation between the employees working on those flights having fun and the passengers. If the employee is having fun with it, you’re allowed to have fun, too.

Heath: Exactly. I think it’s the kind of thing that works for your employees and works for your customers, yet we are humorless in most organizations most of the time. That’s the trick with all this. Things that are special, things that are memorable, are going to be unusual. There’s going to be high variance. Yet bureaucracy is designed to drive out the variances, designed to drive out the humor. It’s designed to make everybody the same. That’s what bureaucracy was wonderful for when it was created because it was the opposite of nepotism. It was the opposite of insider dealing.

Knowledge at Wharton: You also talk about breaking the script. Take us into that concept.

Heath: Psychologists say that surprise is an emotion that happens when something is broken about our way of guessing what the world is going to do. We have scripts about how things are going to unfold. We have a restaurant script for greeting, seating with the menus and ordering the food. We can go on and list all the components of that event that normally happen. What it takes to get people’s attention when you’re out with them is to break that script. Have an unexpected appetizer that shows up or have a second dessert that the house just gives you. Those would be things that would break our script of the normal restaurant encounter, and it would be memorable. Very often, to be memorable means breaking the script.