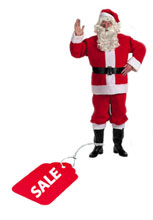 Target, Best Buy and Macy’s, among others, are doing it; J.C Penney isn’t, and Walmart is doing it in spades.

The “it” is the move by some stores on Black Friday to push the boundaries of consumerism farther than ever before. While retailers for years have opened their doors in the early hours (think 4 a.m.) on Friday,the day after the Thanksgiving holiday,this year they are opening at midnight Thursday,or,in the case of Walmart, at 10 p.m. that night.

According to an article in The New York Times, however, a number of shoppers are antagonized, rather than energized, by the earlier hours. Some resent the pressure to leave their Thanksgiving dinners in order to get in line for sales and special offers. Others, the article says, claim the early hours are exploiting employees who have no choice but to work the shifts that their bosses demand.

So why not just succumb to the inevitable and open stores all day on Thanksgiving?

“Certainly,it doesn’t take too much to get there,” says Wharton marketing professor Barbara Kahn. “One retailer opens at midnight, everyone copies; then they open at 11 p.m., everyone copies and before you know it, Thanksgiving Thursday becomes like other Thursdays – except presumably some of the ‘hot sales’ prevail that we don’t necessarily see on other Thursdays.”

And just how effective is this race to the early hours for retailers hoping that buyers spend enough on Black Friday to help them “get in the black” (hence the name “Black Friday”) for the holiday season? “Anything retailers can do to create excitement and get consumers into the stores to shop will be helpful,” says Kahn. “If retailers are able to get a jump on their competitors,and get the deal-prone shopper into their store rather than into [another’s], it’s an advantage for that retailer. Unfortunately,however,if it’s a good idea that is gaining attention from the media and from shoppers,other competitors feel forced to copy – which is exactly what has happened. Then no retailer has a particular advantage. All that [means] is that the shopping time table has moved earlier for everyone.”

Marketing professor Stephen Hoch agrees. “I see no upside for anyone now that most retailers have matched competitors’ early — or is it late? — openings,” he says. “In total, all that this retailer arms race does is shift sales around a little bit with no aggregate effect. It’s a feeble attempt to try and ignite mass market spending. What is crazy to me is that there are good and bad deals all year round, but some people treat Black Friday as the one over-the-top bargain hunting event of the year. Why not be a smart shopper all year round?”

Kahn notes,however,that the midnight or early Friday morning openings “are generally promotional opportunities – which are different from regular sales…. Sometimes it is about innovative new ideas or brands,like Kohl’s with their very successful J-Lo/Mark Anthony promotions or Target’s Missoni [collection]. Other times, it is planned pricing promotions that often have a time limit, which provides a ‘scarcity’ incentive — i.e.,get to the stores on time,or miss out on the deal. These are all … a part of the season strategy which is reflected in pricing decisions,inventory decisions,merchandising decisions,etc.”

As for the effect of Thanksgiving creep on store employees, Wharton marketing professor Cassie Mogilner thinks that the trend towards earlier and earlier hours suggests “an unfortunate slide towards losing yet another holiday to gross consumerism. If many of the retailers open their doors on Thanksgiving, then yes, these stores will lose any competitive advantage. For the sake of their employees and for the expressed values of the company, I would recommend to stores that they differentiate themselves by not following the crowd, and that they be explicit about why they are not doing so.”

Consumers, Mogilner adds, appreciate brands that “share their values, connect to their emotions and are authentic. Caring about the well-being of employees and the preservation of this much loved, All-American holiday strongly conveys these sources of brand equity. If a store positions itself as wanting to foster the meaning of Thanksgiving … [including] spending time together with friends and family, I think there would be some value gained. This positioning should probably also convey a commitment to offering the same deals and access to those sought-after ‘steals’ the next day without cutting into precious family time.”

Kahn has a similar take. “Instead of joining in with other retailers racing to open earlier and earlier on Thanksgiving evening,the retailer could take the approach of saying,‘Let’s value family time and give thanks,’ and then say that in support of their employees and out of respect for the importance of giving thanks,they will not open at midnight Thursday, but will instead offer a special deal at noon on Friday. Something like that could differentiate a retailer in a positive way, and perhaps drive sales from other types of shoppers who might value this perspective.”