Biased Expectations: Can Accounting Tools Lead to, Rather than Prevent, Executive Mistakes? - Knowledge@Wharton

Biased Expectations: Can Accounting Tools Lead to, Rather than Prevent, Executive Mistakes? 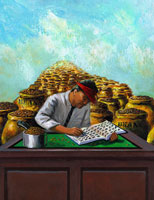 Accounting techniques like budgeting, sales projections and financial reporting are supposed to help prevent business failures by giving managers realistic plans to guide their actions and feedback on their progress. In other words, they are supposed to leaven entrepreneurial optimism with green-eye-shaded realism.

At least that’s the theory. But when Gavin Cassar, a Wharton accounting professor, tested this idea, he found something troubling: Some accounting tools not only fail to help businesspeople, but may actually lead them astray. In one of his recent studies, forthcoming in Contemporary Accounting Research, Cassar showed that budgeting didn’t help a group of Australian firms accurately forecast their revenues. In a second paper,he found that the preparation of financial projections added to aspiring entrepreneurs’ optimism, leading them to overestimate their subsequent levels of sales and employment.

“It’s been shown in many studies that people are overly optimistic,” Cassar says. “What’s interesting here is that, when you use the accounting tools, the optimism is even more extreme. This suggests that using the tools, which a lot of academics and government agencies say is good practice, can lead to even bigger mistakes.”

He is not suggesting that anyone ignore accounting activities and techniques. Investors and regulators expect firms to implement robust accounting systems. And they should, he says, because financial reports provide a detailed map of a business and its performance. But Cassar believes that businesspeople — especially entrepreneurs, who bet both their reputations and personal wealth on their ventures — should understand the limitations of accounting estimates as well as how common human tendencies, like optimism, can lead to their misinterpretation.

Cassar’s first study, titled “Budgets, Financial Reports and Manager Forecast Accuracy,” set out to the test the usefulness of some basic tools in the accounting kit. It sprang from his work experience before he attended graduate school, when, as an accountant for a builder in his native Australia, he watched the company’s gradual decline into bankruptcy. “My first job was as a financial and managerial accountant for a civil construction firm,” he says. “My second, 18 months later, was working for the [bankruptcy] receiver of that same company.”

On review, the firm’s accountants had seemed to do everything right. They had prepared budgets and put systems in place to get timely performance reports that could then be factored into the company’s future budgets and plans. As two big highway jobs foundered, the losses showed up promptly in the monthly reports. Even so, company executives failed to take remedial action. “The project managers said that the losses would turn around, but they didn’t,” Cassar says. “On both those jobs, they went over budgeted costs by 50%. Those two jobs resulted in the demise of that company.”

But it wasn’t the accounting systems that were the problem. It was the users. “No one would take responsibility because the cost of doing that was losing your job,” Cassar says. “The irony is that, in the end, everyone lost their jobs.”

Cassar’s study enabled him to assess whether budgeting and internal reporting have helped other firms more than they did his former employer. He examined a group of about 4,000 companies, all with less than 200 employees, surveyed by the Australian Bureau of Statistics. Managers of these firms were asked whether they prepared budgets and internal reports and also were asked to provide revenue forecasts and in future years were asked to provide subsequent performance. The agency followed the firms over four years. Thus its data showed how close they came to meeting their forecasts.

Cassar suspected that doing either budgets or internal reports — or, better yet, both — might improve a company’s forecasts. “The presence in a firm of a budget preparation activity should result in improved forecast accuracy because the systematic collection of a broad range of information should allow for a more accurate assessment of future performance,” write Cassar and his co-author, Brian Gibson, an accounting professor at Australia’s University of New England. “However, budgeting in itself may not improve forecasting accuracy, because budgeting without internal reporting is a meaningless formal control system.”

When Cassar and Gibson crunched the numbers, their prediction was borne out: The impact of budgeting alone was trivial, improving forecast accuracy by less than 2%. But internal reporting made a real difference, improving accuracy by about 8.5%. And used together, the two techniques improved forecast accuracy even more, by about 12%. “Collectively these results suggest that internal accounting report preparation improves forecast accuracy. In addition, although the accuracy benefits from budget preparation appear limited, the improvement is greater when both budget preparation and internal account reporting are used,” Cassar and Gibson write.

What’s more, the firms that saw the most improvement in their forecasts were ones that operated in the most uncertain environments, as measured by the variability of revenue. Arguably, these firms most needed the guidance.

Cassar’s second study, titled “Are Individuals Entering Self-Employment Overly-Optimistic? An Empirical Test of Plans and Projections on Nascent Entrepreneur Expectations,” built on the findings of his first one. Here, he wasn’t interested in whether accounting tools merely helped entrepreneurs; he wanted to know whether they could distort their thinking.

His curiosity grew partly from his knowledge of the field of behavioral economics, which marries the insights and methods of psychology and economics. Behavioralists have documented a number of mental shortcuts and biases that can lead people to depart from the logic that traditional economic orthodoxy would suggest. One of the concepts, for example, introduced by Nobel Laureate Daniel Kahneman and co-author Dan Lovallo, is that “an inside view” can distort decision making. A person who adopts an inside view becomes so focused on formulating his particular plan that he neglects to consider critical outside information, like other people’s experiences in pursuing the same goal.

“Individuals form an inside view forecast by focusing on the specifics of the case, the details of the plan that exists and obstacles to its completion, and by constructing scenarios of future progress,” Cassar summarizes. “In contrast, an outside view is statistical and comparative in nature and does not involve any attempt to divine the future at any level of detail.”

Doing financial projections for an entrepreneurial venture, Cassar realized, entails the creation of an inside view. The entrepreneur builds a storyline of success in her head and then plays it out in her spreadsheet, showing rising sales year after year. “Humans are good at storytelling and building causal links,” Cassar notes. “They think, ‘I’ll go to college, I’ll write a business plan, I’ll raise some capital and then I’ll go public or sell out to a big competitor.’ There’s a probability attached to each of these steps, but they don’t think about that. They put all the links together and evaluate the likelihood of success at a much higher probability than is realistic.”

Consider the approximately 400 aspiring U.S. entrepreneurs whom Cassar studied. On average, they believed that their ideas had about an 80% likelihood of becoming viable ventures, though only half actually ended up becoming businesses. Of the entrepreneurs who realized their plans, about 62% overestimated their first-year sales, and about 46% overestimated what their employment would be at the end of year one. Employment, unlike sales, implies both costs and benefits, perhaps explaining the lower jobs figure, Cassar notes. As a company grows it needs more employees, but it also has to pay them.

So far, none of this seems radical. Yes, entrepreneurs are optimistic. They have to be if they are undertaking the risks of starting a business. But when Cassar started to sort through the entrepreneurs’ use of common accounting and planning techniques, he uncovered surprises.

People who did financial projections were the most likely to overestimate the future sales of their ventures. In other words, “the same management activities that entrepreneurs rely on to cope with uncertainty appear to be causing individuals to hold optimistic expectations,” he writes. Interestingly, writing a business plan also led to optimism about the likelihood of success, but it didn’t lead to overly optimistic expectations because it’s also “positively associated with the likelihood that the nascent activity will become an operating venture,” he adds. Put another way, people who write plans are more likely to start companies, thereby justifying their optimism.

One group turned out to be more realistic than the others — entrepreneurs who had received money from real sales. “This demonstrates the benefit of actually making sales in improving the rationality of financial sales expectations,” Cassar notes.

Despite his findings, Cassar doesn’t believe that aspiring entrepreneurs should abandon financial projections. For one thing, investors, particularly venture capitalists, wouldn’t allow that; they expect firms in which they invest to do projections, if only because it demonstrates a command of the basics of budgets and accounting. For another, Cassar believes that preparing projections helps entrepreneurs understand the drivers of profitability in their businesses and the dynamics of their industries.

But he says that entrepreneurs need to understand the ways in which accounting tools may subvert their thinking. “Acknowledging how management practices bias expectations may allow decision makers to use organizational or decision making controls to reduce this influence,” he writes. “For example, generating reasons why the planned outcome may not be achieved or consciously relating past experiences to the forecasting task at hand are approaches individuals can take to reduce overly optimistic or overconfident forecasts.”

Cassar hasn’t studied them, but he suspects that venture capitalists might be better than entrepreneurs at viewing financial projections with the appropriate skepticism. Because they see hundreds, even thousands, of business plans a year, they tend to take an outside view.

“Very good VCs are good at picking winners because they know what the risks are,” he says. “A lot of VCs, when they go through business plans, think, ‘What are the drivers of value creation and what’s the scope of their upsides? And what are the fundamental threats that the entrepreneur isn’t focusing on because it’s not in his interest to do so?'”

Based on his own experience, Cassar sees “many benefits from managers and entrepreneurs using accounting techniques.” However, he adds, “it is important to recognize that financial projections of success are merely projections based on beliefs, which are sometimes based on overconfident or optimistic assumptions. Using these accounting tools may actually exacerbate, rather than dampen, these tendencies.”