Finding a Better Way to Value Companies in the Digital World

These days, every company either is or must become a digital organization if they want to survive and grow in the age of platforms and networks. But getting there is no cakewalk. The journey requires leaving behind old mental models of industry and value.

What is so amazing is not just the fact that these five companies have risen to such heights in market cap, but also the following:

A decade ago, the five most valuable companies on the Standard & Poor’s 500 Index were Exxon, GE, Microsoft, Gazprom and Citigroup. Today, the ranking has radically changed.

And how about the other four — are they all the same type of high tech company? To understand the context to this question – whether today’s industry classifications make sense in a flat world — one must simply look back at the history of industries and the way value has been measured.

Industry Silos Are Out, Business Models Are In

In 1957, oil had an outsized impact on the U.S. economy. Thus, the biggest energy company was also the most valuable company: Standard Oil of New Jersey — an ancestor of Exxon Mobil. No pure tech company ranked in the top 10 back then, not even IBM, which soon became the dominant tech company — a position it held until Microsoft surpassed it in the mid-1990s. Indeed, half a century ago, it was all about physical assets, manufacturing and distribution of material goods — such as GE appliances and locomotives.

But this is a new time and place — one dominated increasingly by horizontal digital platforms, virtual networks and Big Data that span traditional industry verticals. And new companies such as Facebook, LinkedIn, Uber and Airbnb have sprung up to take advantage of today’s new opportunity — to build horizontal platforms that leverage the assets of you and me and what we have (cars and homes), do (drive) and know (friends). 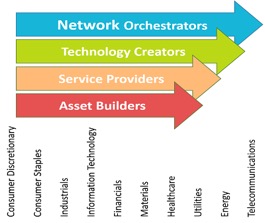 The 10 main industry allocations by S&P — or Global Industry Classification Standard (GICS) — have become antiquated in a world that is flattening, a phenomenon first depicted by New York Times’ columnist Thomas Friedman in his bestselling book, The World Is Flat. S&P’s classifications are based on an old-style vertical or silo approach to corporate designations. These outdated groupings also affect where investors put their money.

However, the five tech leaders are pan-company, pan-industry and even pan-country, and as a result, they dominate the physical and material world and supplant the old way of thinking as evidenced by the GICS. For example, materials and energy companies, which together constituted almost half of the total value of the S&P 500 in 1957, now account for less than 10%.  Even that level is not sustainable if they want to compete for investor dollars and employee talent in an increasingly digitally dominated and flat world. But that’s only half the story.

Time for a New Mental Model

Looking back, it wasn’t long ago that huge companies (at least by the traditional measures of sales and assets) such as GE, GM and Exxon Mobile were the companies considered most valuable by the market. Subsequently, asset behemoths were replaced by financial services giants (Citigroup and JPMorgan Chase), which had fewer physical assets. In time, services firms fell from the top spots as investors valued intellectual and network capital more than physical capital and services.

We all need to recognize Facebook’s 1.7 billion monthly active users as valuable an asset as GM’s or GE’s physical assets.

To put this massive value shift in context, not only is the current classification system outdated, so is the measurement system that supports it — called GAAP — or Generally Accepted Accounting Principles. In many ways, there is a massive gap – pun intended — in GAAP. According to financial consultancy Ocean Tomo, 83% of the market value of the S&P comprised companies whose businesses were based on physical, or tangible assets in 1975. As of early 2015, that number had fallen to 16%.

To help companies pivot their business models to compete with the tech giants, it’s time to update the 50-year-old GICS as well as GAAP. We all need to recognize Facebook’s 1.7 billion monthly active users as valuable an asset as GM’s or GE’s physical assets — if we want to help investors, customers and employees navigate the new tech landscape with better insights.

Further, every firm in time needs to become a digital firm that leverages intangibles, virtual networks and technology platforms if it wants to compete in the virtual and non-material world that will be characterized by virtual reality and augmented reality. It’s time to fix the underlying systems that guide our every action – our industry classification and accounting systems. Together, these two systems miss the point when they categorize today’s most valuable companies without prioritizing intangible assets. Moreover, they put companies like Amazon in the wrong bucket.

What the tech giants can do is bring the world of accountants and regulators into the 21st century of horizontal business models and intangible assets. If they don’t, investors will circumvent them and newer, more modern standards will emerge to disrupt those standard setters just as disruptors are emerging in other industries.

Finding a Better Way to Value Companies in the Digital World. Knowledge@Wharton (2016, August 30). Retrieved from https://knowledge.wharton.upenn.edu/article/better-way-value-companies-digital-world/

Nice article! Thanks a lot for sharing!