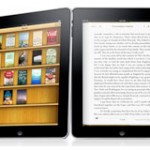 When legislators in the state of Georgia announced recently that they were considering replacing textbooks with iPads in middle schools, the promise of electronic textbooks appeared to take another step forward.

Tommie Williams, a state Senate leader, told The Atlanta Journal-Constitution that Apple has offered to provide each student with “an iPad, wi-fi the system, provide all the books on the system, all the upgrades, all the teacher training.” The cost: $500 per student, about the cost of the least expensive iPad.

“We’re currently spending about $40 million a year on books,” Williams noted in the article. “And they last about seven years. We have books that don’t even have 9/11 [in them].” Other proponents touting  the advantages of electronic textbooks also cite the advantage of always-up-to-date books along with the potential for more interactive learning and potentially lower costs.

According to some critics, however, the tablet computers may offer a wow factor that sparks an initial engagement that soon wears off. Electronic textbooks certainly can offer continuous updates. But when it comes to costs, the evidence, so far at least, seems scarce. The New York Times reports that a Roslyn Heights, N.Y., school, which has issued iPads to 47 students in pilot programs, expects to save a small amount of money in textbook costs, even though it paid about $750 each for upgraded versions. Others argue that iPads can also cost more than they save, or that cheaper technologies can offer similar advantages.

As for the state of Georgia, The Atlanta Journal-Constitution also reported that it would cost nearly $189 million to outfit some 377,000 middle school students in the state with the iPad-based curriculum. It will take some sharp pencils to determine whether that would cost the state more or less. The article notes that the $40 million in current annual textbook costs cited by Williams does not count addition local outlays.

And while the jury remains out regarding how electronic texts and related interactive learning affects student performance, some results should be in soon. In one experiment, The Boston Globe reports that some 400 sixth- and seventh-graders in California have been using a redesigned algebra “book” on an iPad from Houghton Mifflin Harcourt Publishing. “The 400 students using the app will be able to receive feedback on practice questions, write and save notes, receive guided instruction, and access video lessons taught by Edward Burger, a Williams College mathematics professor,” notes the Globe. An independent research group is expected to tally up the results against a control group later this year “in the areas of student achievement and attitudes about learning.”

Other publishers are also experimenting vigorously to determine the contours of the more than $8 billion educational materials market going forward. But until more evidence is in regarding costs and performance, educators are unlikely to take huge steps.

Wharton marketing professor Eric T. Bradlow notes that “Everyone is still in the experimental phase with how 21st century learning will best manifest itself. No one exactly knows the effectiveness of different programs, but people are starting to try and rigorously quantify it.”

Still, for all the uncertainty, the trend towards electronic texts books looks clear, according to Wharton management professor Stephen J. Kobrin. He says that moving iPads — and more importantly tablets in general — into schools is definitely the beginning of a trend. “While I am not sure how quickly electronic textbooks will be adopted, the idea makes too much sense to be a flash in the pan. The cost of texts has escalated sharply and each edition — at least at the college level — lasts but a few years.” Electronic texts, meantime, “allow the author to update easily and offer the possibility of customizing content at a reasonable cost.”

And nearly a year after the iPad’s introduction, Bradlow agrees the promise looks bright. “I think there will be quick diffusion here because this is a good monetization opportunity [through] targeted ads, etc.,” Bradlow says. “Also, it has an enormous potential to impact the way people learn,” given the ability to bring in dynamic videos, tutorials and the like. “It leads to a much different brand of learning.”