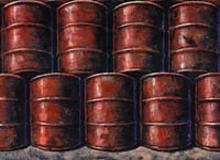 The sudden, bloody end to Colonel Muammar Qaddafi’s 42-year rule in Libya has observers concerned about the risk of a power struggle in the North African country. But for the moment, the world’s focus is on Libya’s oil.

Economically, Libya has primarily relied on its oil resources. According to 2010 figures from the CIA World Factbook, before its civil war, the country’s petroleum industry produced 1.789 million barrels a day, and its oil exports accounted for 25% of its GDP.

But production fell to less than 400,000 barrels a day during the conflict. The most optimistic analysts suggest that full production capacity could be restored by early next year. The country has roughly 46 billion barrels of oil reserves — the ninth largest in the world — and nearly 55 trillion cubic feet of natural gas reserves.

“Libya is fortunate in having a [relatively] small population … and valuable oil resources. It has the potential to derive a large income from oil after an initial period of reconstructing the infrastructure,” says Ann E. Mayer, professor of legal studies and business ethics at Wharton. “But the oil sector cannot offer enough jobs to satisfy all Libyans demanding employment.”

Mayer notes that under Qaddafi, “the unemployment rate among Libyan citizens was high, in part because of the distaste that Libyans felt for accepting work in low status jobs that were seen to be demeaning, which were left for migrants to handle.” Most migrant laborers fled the country when civil war broke out.

The International Energy Agency (IEA) has advised caution on expectations of renewed oil production in Libya. “If [Qaddafi’s death] leads to greater political clarity within Libya, and to a more stable operating and investment environment, then it may result in a more rapid restoration of the Libyan oil sector,” David Fyfe, head of the IEA’s oil industry and markets division, noted in a press statement. “However, many logistical, operational and security-related challenges remain in that country, so we are not changing our underlying assumptions on Libyan production recovery for now. We still believe it could take many months for production to regain pre-crisis levels.”

The thorny question of who takes control of Libya’s oil exports was first raised while fighting still raged in the country. Speaking with Reuters, the head of the country’s National Oil Company speculated that he would not remain if a reshuffle occurred. Divisions between the western and eastern parts of the country also loom large in future control of the country’s oil resources.

Most analysts suggest that little stability will exist while a transitional government forms, hindering any plans to get Libya’s oil flowing again. “The death of Qaddafi changes very little in the underlying dynamics of the oil picture on the ground,” Barclays Capital analysts noted.

Juan Cole, a Middle East expert at the University of Michigan, told Reuters that strife in Libya between its tribes could be avoided through egalitarian economic policy. “A more or less democratic government that spreads around [Libya’s] oil largesse more equitably could easily overcome this divide, which is contingent and not structural,” Cole said.

According to Mayer, Libyan economic planners will also have to figure out how to address unemployment concerns, which will include deciding whether or not to revive the former system of extensive reliance on a vast underclass of migrant workers, a system that is typical in oil-rich countries but that naturally creates social tensions and imbalances. “Do they want to invite back the same diverse population of migrants?  Do they prefer to try to integrate their economy with the economies of Egypt and Tunisia by favoring their nationals?  Do they want to try to alter Libyans’ attitudes so that they will accept working in jobs that were previously left for migrants? A lot will hinge on the answers to these questions.”