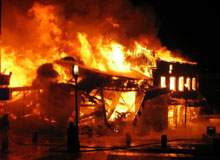 Britain’s cities are by no means strangers to riots. Only a few months ago, London was rocked by a spate of weekly riots as students took to the streets to protest rising university fees. But with the riots that erupted in half a dozen London boroughs (or districts) and several other major cities during the past week, “it’s the scale that has been so impressive,” says Wharton management professor Matthew Bidwell.

While it may be too soon to say how much damage — economic or otherwise — the riots have caused, guesstimates are being made. The Association of British Insurers, for example, predicts the damages and loss of business could cost Britain “tens of millions” of pounds.

“In a way, we could think of the riots as having an economic effect very much like a natural disaster,” says Geoffrey Wood, emeritus economics professor at City University’s Cass Business School in London. “Everyone is worse off, but output rises,” as the houses, offices, factories and goods destroyed are replaced. “Despite that appearance of increased prosperity, no one wishes for more natural disasters. The same is true of riots. They lead to increased output, but they do it by destroying wealth.”

But for now, the focus of much of the country has been on the causes rather than effects of the riots, although it also may be too soon — and perhaps too difficult — to pinpoint them. Many factors are at play, says Bidwell, a native of the London borough Hammersmith and Fulham. “If you believe that the fundamental problem in the U.K. is a failure of multiculturalism, then you can look at the riots and say, ‘It’s all about multiculturalism.’ If you believe the problem is the growth of inequality and the problem of unemployment, you can look at this and say, ‘It’s all about inequality and unemployment.’ Or you name it.”

But despite the vantage point, what couldn’t be ignored during the news coverage of the riots were the youthful faces of the perpetrators, the many disenfranchised inner-city kids with declining job prospects, few if any aspirations and little or no qualifications, says Ben Willmott, head of public policy at the Chartered Institute of Personnel and Development, a London-based professional body. “There are linkages [between] the riots and unemployment and the ongoing economic downturn, and the youth are finding it hard to get a foothold in a tough labor market.” As a case in point, he cites Haringey, the north London borough where the rioting began and where youth unemployment is double-digit. According to FT.com, unemployment among Haringey residents who are 24 years old and younger is 19.6%, compared with 6.6% overall in the district.

Haringey is by no means unique. Earlier this year, the BBC reported a record high number of 16- to 24-year-olds out of work across the entire country, far higher than the overall rate of 7.9%. The latest figures from the Office for National Statistics show a slight improvement since then — overall unemployment dipped to 7.7% (or 2.45 million Britons) as of May, and the number of unemployed youth fell from a peak of 965,000 to 917,000.

However, the recovery is fragile. “We need to generate jobs and support businesses that give young people a chance,” says Willmott. “It’s in employers’ interests to invest in young people for a number of reasons, including greater social mobility.” That said, he adds, youth unemployment is just one of several undercurrents of this week’s rioting.

Bidwell agrees, pointing out that the rioters who have been arrested and are already appearing before magistrates include an 11-year-old boy and a primary school assistant. “It’s more complex than unemployment,” he says. A down economy combined with the “yawning gulf” in Britain’s social stratification and “the increasingly polarized nature of income levels have not helped.”

FT.com’s riot analysis reveals that a number of London’s boroughs are among the 50 most deprived in England, citing the “Official Index of Multiple Deprivation 2010” — a ranking of 326 local authorities across the country based on a range of social and economic factors. With a ranking of “1” indicating the most deprived, Haringey is in 11th place, while Hackney, another London borough heavily affected by the riots, tops the ranking — two boroughs just an Underground stop or two from the swanky offices of London’s financial district.

Bidwell wonders what role the austerity measures — including a proposal to cut 2,000 police officers from a force of 32,000 over four years — being pushed through by Tory Prime Minister David Cameron and his coalition government have had in this week’s riots. A study by the Centre for Economics and Business Research says that between 2010 and 2012, U.K.-wide public spending as a share of GDP is expected to fall by 2.2%, and much more in some of the boroughs most affected by this week’s riots, including Haringey. That’s higher than the OECD average of 2%, and cuts may escalate further between 2012 and 2015.

“[The government is] cutting the deficit far faster than they need to, and far faster than is wise given the economic situation,” says Bidwell. “[For] almost any problem that you think is behind this rioting, this makes it worse.”