A New Era for Nonprofits: Seeking Data That Makes a Difference - Knowledge@Wharton

A New Era for Nonprofits: Seeking Data That Makes a Difference 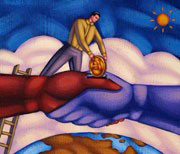 All nonprofits have the goal of making a positive difference in the lives of the populations they serve. But how do they know if their efforts are truly having an impact?

In a new film, Saving Philanthropy:  Resources to Results, director Kate Robinson documents a two-year effort to answer that question. The former director of a health care nonprofit, Robinson began her search when she realized that she had no way to measure the effectiveness of her program. Following a screening of the film, Robinson and a panel of experts discussed this and other struggles for nonprofits at an event sponsored by the University of Pennsylvania’s Center for High Impact Philanthropy, the Wharton Program for Social Impact and the Wharton Leadership Program.

After interviewing dozens of people from across the nonprofit sector, Robinson suggests that  the most successful programs are those that have clearly defined goals, methods of collecting data to see if those goals are being achieved, and the ability to adjust based on what the data is telling them. But in an era of shrinking staffs and greater competition for fewer funding sources, creating such a strategy and making it a key area of concern is very challenging, panelists acknowledged.

“People need to make time for it and view it as a priority, not as something that’s extra if they have time for it at the end of the day,” said Carra Cote-Ackah, a consultant for the Center for High Impact Philanthropy and a former program officer for the Robertson Foundation. “We’re seeing nonprofits closing; we’re seeing drops in funding and we’re seeing a whole new world of funding. That is stressful for nonprofits, and it’s stressful for funders. But making time to prioritize that emphasis on quality, and the learning around it, is really important.”

Thanks to technology, the data that can be made available to nonprofits is much greater than it was in the past. It’s a challenge facing a number of industries and creates a “huge job ahead of us in gaining the translational skill to [present the data] in pictures, in images and in graphs, so you don’t have to be a wonk to get it,” noted Katherina Rosqueta, executive director of the Center for High Impact Philanthropy. “We’re talking about a set of donors who are now used to a lot more information than people were 20 years ago…. If we can solve that, our sector will be closer to the results we want to have.”

But nonprofits are also overwhelmingly facing disconnects between the outcomes they are studying in-house versus those that are of importance to potential and ongoing funders. Panelists said nonprofits need to guard against “mission drift” and be bolder in demonstrating why their data measuring is also meaningful to donors. “That’s an easy thing to say and hard to do,” noted Greg Goldman, vice president of development for the Philadelphia Zoo. “Some funders are so stringent in their own definition of what outcomes are that they impose that definition on the organization, making it very difficult for organizations to develop and work toward their own organically generated outcomes…. The agenda should be driven more from the bottom up.”

Within the organization, however, the staff has to be willing to change course, in some cases dramatically, if they see evidence that a particular program isn’t working. “It takes brave people in both the foundation world and the nonprofit world to have the guts,” to acknowledge a misstep and move on from there, Rosqueta said. “It’s only failure if you don’t learn from it, and if you don’t do that kind of course correcting.”

A New Era for Nonprofits: Seeking Data That Makes a Difference. Knowledge@Wharton (2011, November 10). Retrieved from https://knowledge.wharton.upenn.edu/article/a-new-era-for-nonprofits-seeking-data-that-makes-a-difference/