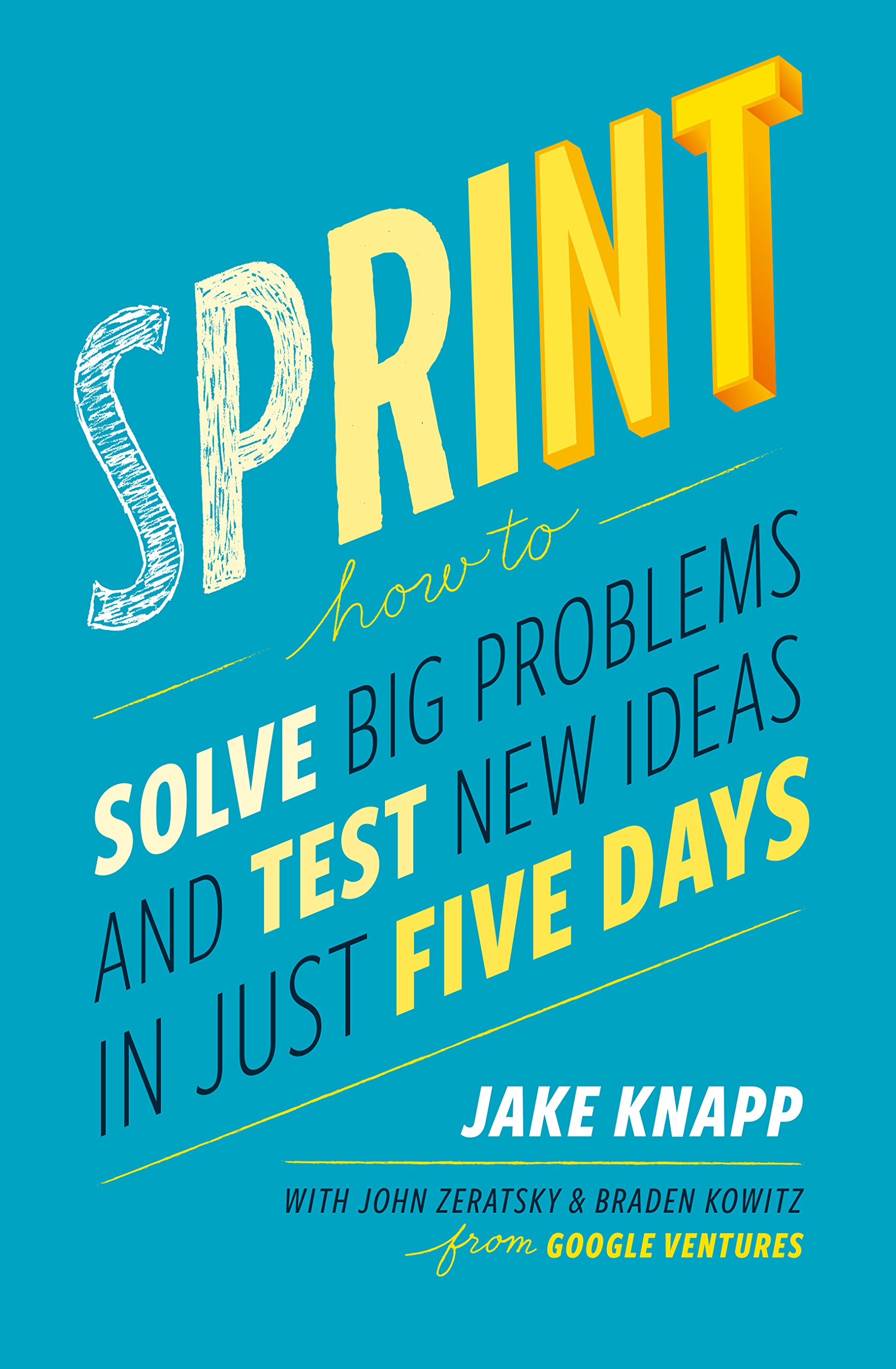 Many companies face difficult problems that require focused attention to solve, but many do not know where to begin. Sprint: How to Solve Big Problems and Test New Ideas in Just Five Days, a new book by Jake Knapp with John Zeratsky and Braden Kowitz, partners at Google Ventures, offers a plan for identifying the best solution to a problem, developing a prototype and testing it with customers.

Knapp and Zeratsky recently spoke with the Knowledge at Wharton Show on Sirius XM channel 111 about how the process works.

Knowledge at Wharton: How did this process come about?

Jake Knapp: It all dates back 12 years to when my son was born, and I started to freak out about making good use of my work time so that I could spend more time with him and feel good about when I did go into the office. Over the past many years, first working at Google, doing some sprints with teams there and then coming to GV, which is Google Ventures, and working with John and the other partners on the team, it has just been a process to figure out how to make teams efficient when they have big problems to solve.

Knowledge at Wharton: John, when did you hear first about these ideas?

John Zeratsky: When Jake joined our team at GV, I had heard that there was this thing called “sprint” that was going around. It was taking Google by storm. There were probably a dozen or more teams who were running sprints, and everything from Chrome to YouTube to Google X. I was excited to recruit Jake to our team because, at that time, it was the “experts mentality,” thinking that we’d make these investments and that we’d have all the answers to help those companies succeed. It became clear to me that with this sprint process, we didn’t need to have the answers because we had a process for finding the answers.

“It became clear to me that with this sprint process, we didn’t need to have the answers because we had a process for finding the answers.”

Knowledge at Wharton: A lot of what Jake has brought to the table is being used at Google Ventures right now, John, correct?

Knapp: That’s exactly right. Our team at GV works for the companies that we’ve invested in. So we get involved after the investment is made. We make a follow-on investment with our time and with our help. We’ve run more than 100 sprints since Jake joined the team with companies in fields from e-commerce and mobile apps to … robotics, health care, food and even coffee – a huge range of companies. It’s given us a chance to really take the sprint process into the lab and optimize it and make sure that it really works for any kind of business.

Knowledge at Wharton: Jake, companies have these problems day in, day out. What ends up being the biggest problem in trying to fix the problem?

Knapp: One of the biggest problems that we see over and over again … is getting stuck in abstract land. So when you’re in abstract land, you’re talking about what might happen when your project is finished, how you think your customers might react. It’s easy to have a lot of arguments when you’re in abstract land and it’s easy to also make a lot of assumptions and spend a lot of time on what turns out to be a hunch. So what we do in the sprint in the course of five days with the team is to figure out — what’s everything that we do know for sure about the project? What are the possible approaches we could take? Then, we get concrete really fast. We’ll make a prototype, and by the end of the week, we’re testing it with customers and actually finding out — do those concrete ideas work or not?

Knowledge at Wharton: You literally break this down day by day. Take people through the process of how this all develops. Start with Monday.

Knapp: On Monday you’ve got your team. That’s the first thing you’ve got. It’s almost like Oceans Eleven — everybody’s got a special skill. Most teams are like this. If you’re doing software, there’s an engineer, there’s a product manager, there’s a marketer, but any kind of project, whatever it is, will have different skill sets. You bring those folks together, including a decision maker, so a decision maker is in the room, and you’ve cleared your calendar for a week. On Monday you’re going to make a map of the problem, share the information that you have. Instead of talking a little bit at the water cooler, talking a little bit in the meeting here and there, you get it all on the table at once.

“It’s easy to have a lot of arguments when you’re in abstract land and it’s easy to also make a lot of assumptions and spend a lot of time on what turns out to be a hunch.”

Then, on Tuesday we come up with solutions. But instead of a group brainstorm where everybody’s shouting out ideas, we do individual sketching — very detailed, quiet work that has a lot of depth to it. On Wednesday, then, you’ve got competing solutions that are at a high level of detail, and we make decisions. Again, we rely on that decision maker who’s in the room, but we also use some structured processes to make sure that there are no sales pitches and no big, long arguments — we just cut right to the chase. On Thursday, we build a prototype. This is a realistic prototype. It looks like what the product or the service might look like when it’s all finished.

Then, Friday we’re going to bring in five customers, one at a time, and do one-on-one interviews with those customers. The rest of the team is going to watch over video, take notes. By the end of the day on Friday, you’ve got some clarity about what to do next.

Knowledge at Wharton: John, how many times have you put this plan into place and seen it work at this point?

Zeratsky: We’ve done well over 100 sprints at this point. When we first started branching out beyond our sweet spot of designing software products, which is what our background is in, frankly, we were a little nervous. We weren’t sure if it was going to work for other kinds of businesses. But I think we’ve seen that a combination of a team of experts not only know a lot about the business, but have the skills to build some type of prototype… So we find by taking that team and giving them a really good process for working together, we can solve problems in basically any kind of business.

Knowledge at Wharton: One of the concepts that you talk about is how the bigger the challenge is, the better the sprint can be.

Zeratsky: Yeah, that’s right. It’s actually one of our litmus tests. A lot of teams will come to us and say, “Oh, this sprint process, it sounds really cool, but how can I get my team to work together in a focused way for five days?” We actually say, “Well, you need to choose a problem that’s big enough that the idea of spending five days on it is not controversial, right?”

“On Monday you’ve got your team…. It’s almost like Oceans Eleven — everybody’s got a special skill. Most teams are like this.”

We find that in most businesses, there is something. There is that new product idea, there’s the way of improving the marketing, there’s something that’s just on everybody’s minds. And so, it’s actually a really helpful … to say, “Let’s pick the biggest problem we can find and let’s commit five days to it in a really focused way.” It also then increases the value of doing that test because these big problems, these big projects also tend to be the ones that are going to require the most investment to execute on. They are going to have the most risk for maybe changing a company’s brand or changing the way that they communicate with their customers, so it makes a lot of sense to use the sprint process to test and make sure you’re on the right track before you go and make that costly investment.

Knowledge at Wharton: Will there be situations where maybe four days or six days is the perfect scenario?

Zeratsky: The five-day sprint is the gold standard. A lot of times what we suggest is for teams to start a big project, to kick off a big project with a full, five-day sprint. We detail the process in the book, literally, hour by hour. There’s even a 15-page checklist at the end of the book. We think that’s really important, to go through all the steps of getting the team on the same page, moving from abstract to concrete, building that prototyping, testing with customers — but it’s frequently the case that after that first five-day sprint, you’ll find in your prototype some things that worked really well, some things that maybe need a little bit more refinement, and then a team cam go into a second or third follow-up sprint and that can frequently be a lot shorter. So it is an adaptable process, but we really think the five-day sprint is the perfect way to kick off a big project.

Knowledge at Wharton: If you get to Friday and you do your testing and it doesn’t go the way you want, what’s the next step in the process?

Zeratsky: Sometimes we call it “an efficient failure.”… It’s rarely the case that it’s just this total failure where you need to go back to the drawing board. What’s more often the case is that certain parts, certain details of what you thought were going to work did not work when you actually put them in front of customers. We say it’s efficient because then you got the opportunity that very next week to turn around and start trying to fix those problems. You’re not at the end of a multi-month and multi-year project where you’ve put all the resources behind this thing you’ve executed, you’ve got it out there in the world. You’re finding out about that failure after a couple days at the end of the sprint.