Expect private equity activity outside of the U.S. to have a good year in 2015.

The second part of this two-part podcast interview on private equity with Stephen M. Sammut, a senior fellow and lecturer at Wharton, and Michael Rogers, EY’s global deputy private equity leader, looks at how 2015 is shaping up for markets outside the U.S.

In China, “offerings like Alibaba have captured the imagination of a lot of investors world-wide … so, the stage is set for tremendous continued activity,” Sammut said. But some caution is recommended. According to Rogers, given the huge IPO backlog in China and a cautious regulatory stance for listing approvals, it will “take several years … before the pipeline normalizes….” Rogers was upbeat about certain markets in Latin America, despite recession in Brazil, and also about Asia-Pacific. In India, Sammut sees retrenchment while participants await word on whether planned economic reforms by newly installed Prime Minister Nerendra Modi can succeed.

Expect Select PE Markets Outside the U.S. to Perform Well in 2015 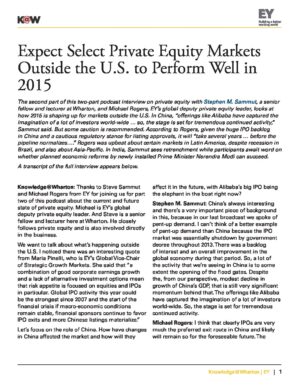