Misadventures at a Startup 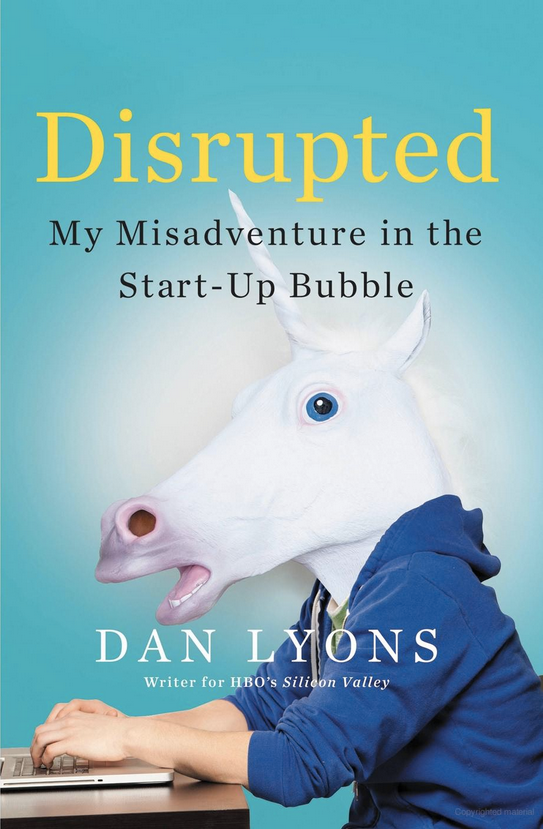 When tech journalist Dan Lyons was laid off from his position at Newsweek after 25 years, he decided he would try working for the startups he used to write about. His new book, Disrupted: My Misadventure in the Start-Up Bubble, chronicles the two years he spent at marketing software startup HubSpot in Boston.

Lyons recently talked about the surprises he encountered in the startup world on the Knowledge at Wharton show on Wharton Business Radio, which airs on SiriusXM channel 111.

Knowledge at Wharton: Explain how you ended up going to work for HubSpot.

Dan Lyons: I was working at Newsweek and got laid off and looked around and saw that it wasn’t just my company that was struggling; the entire industry I was in was struggling. I thought I should start a new career, even though I was 51 at the time. I thought, I can start over. I thought marketing would make sense. A lot of companies, especially tech companies and VC firms, are now hiring journalists to come in and be their in-house blogger. So I decided to make that leap.

Knowledge at Wharton: What was the process like in terms of getting to them and getting hired by them?

Lyons: I reached out to someone there, and said, “Hey, I live in Boston.” At the time I was running a tech blog in San Francisco and commuting back and forth. So I said, “I really want to try working in the tech industry.” I went and had a series of interviews and meetings and met with the two founders and hit it off with them, so they offered me a job.

Knowledge at Wharton: From what I understand, you had that meeting with those two gentlemen and didn’t hear much from them afterward?

“I’ve described it sometimes as a mix of a frat house and a kindergarten and a cult.”

Lyons: Yeah, that was the thing. Not just them, but also the CMO who was one level down from them who I think was supposed to be my boss. They just kind of vanished.

Knowledge at Wharton: What was the company like? What were the other people that were working there like?

Lyons: A lot of nice, young, very energetic people. The average age was 26 at the time. It was a lot of people right out of college. It wasn’t by accident. The CEO did an interview at the time and said, “Look, we’re specifically trying to hire people in their 20s – Gen Y-ers — because older people just don’t get it. They don’t get technology.” … It was intentionally a very, very young place. I’ve described it sometimes as a mix of a frat house and a kindergarten and a cult — a lot of very brainwashed people who really, really think they are making the world a better place and changing the world and doing important work when really a lot of it is very tedious, repetitive work.

Knowledge at Wharton: In the book, you say a lot of these people were drinking the Kool-Aid, but you were not.

Lyons: That’s exactly right. “Drinking the Kool-Aid” is exactly the phrase. Being a little older and maybe naturally somewhat skeptical or cynical made me not a good fit for that kind of environment.

Knowledge at Wharton: How was the company successful?

They are successful with a very simple plan, which is grow fast, lose money, go public. There was a time not so long ago when to go public you needed to be profitable and demonstrate some track record of profitability. There are now a generation of companies that go public while losing money and continue losing money for years and years and years, and yet are, “successful.” They are successful in the public markets. They successfully can grow revenues. But it’s like you and I started a business where we bought dollar bills and sold them for 75 cents. We would say, “Well, our top line is growing like crazy. Look at how fast we’re growing.” It’s sort of that.

“There were “a lot of very brainwashed people who really, really think they are making the world a better place … when really a lot of it is very tedious, repetitive work.”

If you’re a VC, you take some money. You pump it into creating the company. Then you find some traction, get some kind of repeatable process. Then you just plow money into customer acquisition or audience acquisition, if it’s an advertising play, and you pump money into that. You lose money. Then you take it into the public markets and cash out and walk away before it blows up. That is sort of the model, and that was what the revelation was for me as a business journalist. I’m in there, and I finally realized, oh, that’s what this is about. That’s what this is. Then I realized it’s not just these guys; it’s all of these companies.

It was an amazing epiphany for me. Maybe it’s so obvious that it shouldn’t have been an epiphany to me, but it was. To me, it contrasts with everything you read about startups — in the tech blogs, especially. There’s a sort of hero worship of these heroic entrepreneurs who are striking out [on their own]. The VCs promote this myth, too: You don’t want to go work for some big Fortune 500 company; you want to be a cool, hip entrepreneur and make your own destiny.

There was this sort of cognitive dissonance between the way the world is described and what I was experiencing inside there.

Knowledge at Wharton: Do you think that what you saw is more the case with a lot of the other tech companies out there? Or is this an outlier?

Lyons: In terms of the crazy culture, the place where I was working was extreme, but not atypical. I’ve been overwhelmed by the email I’m getting and the comments on Twitter from people saying, “I’m having PTSD [Post-Traumatic Stress Disorder] after reading your book.” I published an article on LinkedIn and an article on The New York Times op-ed page, and Fortune ran an excerpt. So there are people reading aspects of the book in different places.

“People would talk about having superpowers: ‘What’s your superpower? My superpower is sending out email.’”

But every day I wake up and have people telling me, “Oh, this is just like what happened to me” or “This is just like the place where I worked.” Now I have people sending me pictures of their crazy kindergarten-designed workplaces. People sitting on bouncy balls and boxes of toys next to the desk. There are people who may be of my generation who do find this kind of silly and ridiculous. There are people half my age who just think that’s work and that’s what work looks like to them.

So different people have a different response. But if you go for a tour around Silicon Valley companies, it’s like they are all trying to outdo each other with how crazy their headquarters are. It’s not atypical, but I got into one that was at the far end of the crazy spectrum.

Knowledge at Wharton: It’s almost a little bit of a language barrier that you had to deal with.

Lyons: I called it HubSpeak because the company was called HubSpot. They had their own language and … lots of acronyms. They talked about “delightion,” which is the business we were supposedly in. We weren’t selling software; we were spreading delight among our customers. … They would say, “1 plus 1 equals 3.” I don’t really know what that meant, but it was kind of like if an idea was really good, it was a 1-plus-1-equals-3 kind of idea. People would talk about having superpowers: “What’s your superpower? My superpower is sending out email.” Like, okay, cool.

One of the founders brings a teddy bear to meetings, and the teddy bear is supposed to be the customer. We’re all supposed to take this seriously and not laugh at it. I had a hard time not laughing at stuff like that.

Knowledge at Wharton: It has to be a little bit of a generational shock. You go into this and deal with this for two years and you see all this stuff going on. It is so far and away from everything that you’ve probably known in your time working at Newsweek.

Lyons: That’s an interesting point, too. People of our age or our generation, which I guess we would be Gen X, … came into the workforce in the 20th century with certain expectations — in a way, expectations that we were going to have a career or a work life somewhat similar to the ones our parents had. My dad worked at AT&T his whole career. … But halfway through our careers, the rules all changed.

Young people coming into the workforce today are coming in with an expectation that we’re going to work one or two years at this place and then move to the next and move to the next. We’re going to be doing these gigs — the gig economy or the sharing economy. But our generation is kind of caught in the middle. In 2008 and 2009, when the big collapse happened, if you were 60, you were close enough to retirement you could just [decide to get] out. But there was a generation of us that got caught in the middle of it. That was another thing that I find very interesting, is trying to adjust to this new concept of work, which is both goofy with all the kooky stuff at the office, but then also, in a way, cruel and not nearly as supportive as the one that we entered the workforce with.

Knowledge at Wharton: Is it almost a little bit of a scam?

Lyons: There is a way in which the free beer and the candy and the cool hip environment, blah, blah, blah, is really a scam. People are being conned into these jobs that aren’t really in their interests. The ones who benefit are the people at the top who save space, for example, by putting people in open workspaces, instead of giving everyone an office or a cubicle. They cram these kids into these rooms, “’cause that’s how your generation likes to work.” But it’s really about saving on space.

“The term for when you got fired was what they called ‘graduation.’”

“We have unlimited vacation,” but that’s really so we don’t have to carry the balance of our owed vacation time on our books. There are lots of ways in which these things are set up to [enable] ephemeral companies to grow fast, go public as quickly as they can and not build sustainable jobs for people that will last for decades. They have no interest, really, in providing employment to someone for the rest of their life.

Knowledge at Wharton: Your last chapter in the book is graduation day. “Graduation,” the term, didn’t exactly have the kind of meaning that a lot of people would think.

Lyons: I forgot to mention that when we talked about language. The term for when you got fired was what they called “graduation.” They would send up this cheery email saying “Yo, Bob just graduated and we wish him the best in his next big rockstar adventure using his superpowers. We’re so excited to see what he’s going to do.” Like, dude, you just fired the guy.