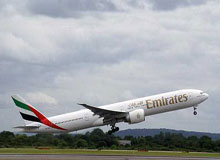 Intent on cementing itself as an international flight hub, Dubai continues to invest in its airline infrastructure and brand new airplanes. The sheikhdom will invest US$5.98 billion to expand Dubai and the new Al Maktoum international airports by 2020, officials say. Meanwhile, the Dubai government-owned Emirates airline plans to spend roughly US$10 billion a year to expand its fleet over three years, including 18 cargo planes.

Demonstrating the increasing clout of Gulf airlines in the aviation industry, Airbus has agreed to redesign its A350-1000 jet, after its Arab customers asked for changes that would allow the plane to fly further and carry more.

The government entity, Dubai Airports, recently forecast that international passenger traffic to Dubai would grow an average of 7.2% percent over the next decade, with passenger traffic reaching almost 100 million by 2020, and cargo volumes above 4 million tons.

Paul Griffiths, Dubai Airports CEO, told an audience in Bangkok recently that in less than a decade, aviation would account for 32% of the sheikhdom’s GDP — roughly US$45.4 billion. But in the same speech, Griffiths acknowledged that Dubai’s current airspace “is not currently configured to support this growth.”

Regional competitors will pose another threat to Dubai’s plans for aviation domination. Doha-based Qatar Airways is expecting to receive 200 jets worth US$35 billion, and is making a play for regional cargo business, converting 15 passenger jets to freighters and taking 33% ownership of Europe’s biggest freight carrier, Cargolux Airlines International SA. There is even competition from within the United Arab Emirates, as Dubai’s buttoned-down neighbor, Abu Dhabi, is undertaking major expansion plans for its international airport, and promoting its own airline, Etihad, which has ordered US$50 billion worth of jetliners.

Michael Wisbrun, managing director of SkyTeam Cargo, which includes the freight arm of Air France-KLM Group, told Arabian Business that such ambitious plans were of concern. “It will be tough. There’s no reason to have a hub in Qatar or the United Arab Emirates, and adding capacity with supply and demand as they are won’t help the equilibrium.”

There is need to question the sustainability of such growth, according to Wharton management professor Peter Cappelli. Speaking with Arabic Knowledge at Wharton about the Gulf airlines’ push to become a global hub for air travel, Cappelli noted that “only [a few] airlines in the world make money and the industry as a whole loses billions every year. Fundamentally, the nature of the industry is the problem: The marginal cost of filling an extra seat is almost nothing, so whenever the carriers have excess capacity, they have fare wars, and they all bleed to death. The only time any of them make any money is in the brief period in which demand is growing faster than capacity. Is there any reason to think that the carriers in the Middle East have somehow cracked this problem by spending more on new planes?”