Amazon founder Jeff Bezos is moving on from his position as CEO, but he’s not moving out.

Bezos announced last week that he will transition to the role of executive chairman, and Amazon Web Services chief Andy Jassy will become CEO. As executive chair, Bezos will lead the board of directors, closely advise Jassy and maintain significant influence over the business empire he built from scratch.

“Executive chairs are often very involved, and he sounds like he will be very involved really as a partner with Andy. And that’s a good thing. It’s a busy place, lots going on,” Wharton management professor Michael Useem said during an interview with the Wharton Business Daily show on SiriusXM. (Listen to the podcast above.) Useem is director of Wharton’s Center for Leadership and Change Management.

The change takes effect in the third quarter, which begins in July. Bezos said he wants to focus on new products, innovation, and other initiatives, including his environmental and social funds, and The Washington Post, which he purchased in 2013.

As executive chairman, Bezos can keep a guiding hand on the wheel, “but also not be the person who’s ultimately accountable for the strategic successes or failures of the company going forward,” Wharton management professor Mary-Hunter McDonnell said in an interview with Marketplace.

“I think we’re not going to see a whole lot of wobbling of Amazon in the next couple of quarters.” –Mike Useem

Useem said he expects the transition to be seamless. Jassy has been at the company almost as long as his boss and serves as his deputy, so he’s likely been groomed for some time to be Bezos’ successor.

Jassy has “presumably been developed to increasingly act and think like a general manager, which means you’ve got to think about everything in the same sentence,” Useem said. “I think we’re not going to see a whole lot of wobbling of Amazon in the next couple of quarters.”

Wharton marketing professor Barbara Kahn agreed, saying Jassy’s tenure suggests that he is “totally indoctrinated” in the company’s ethos. Like Bezos, he’s an innovator who has grown Amazon’s most profitable division — cloud computing services — and his strengths have been rewarded.

“I wouldn’t anticipate massive changes in Amazon’s strategy, which has been pretty consistent over the last 25 years — focus on the customer, provide the customer with the best customer experience possible,” Kahn said. “Bottom line, I don’t think the customers will notice this change in their everyday dealings with Amazon.”

CEO succession is routine and expected in business, the professors said. Yet even with the right pedigree, Jassy has big shoes to fill. Think about Tim Cook, who followed Steve Jobs as CEO of Apple, or Sundar Pichai, who was handed the reins of Google from founders Larry Page and Sergey Brin. There will be intense pressure on Jassy to continue Amazon’s growth trajectory and profitability.

“It’s a different era now. A different skill set is required to keep Amazon on the amazing growth path that it’s had. Different leadership is required,” Useem said. “My guess is Jeff has probably said to Andy Jassy as he comes in, ‘Be yourself. You’re not me. It’s a different era. You’ve got to lead in your own way.’”

“It seems evident that if anyone could continue what Bezos started, it would be someone like Jassy.” –Barbara Kahn

Bezos redefined what it means to be a great retailer, said Kahn, who is author of The Shopping Revolution. His name is synonymous with innovation in the sector; Bezos was directly involved in the company’s more than 150 patents. But she pointed out that Jassy also has been innovative in building Amazon into a powerhouse technology company.

“It seems evident that if anyone could continue what Bezos started, it would be someone like Jassy. But coming in with a new perspective is likely to be beneficial as well,” Kahn said.

When asked where she thinks Amazon will be in five years, Kahn said Jassy will have to tackle some of the weaknesses and controversies the company has been dealing with more recently, including counterfeit and poor-quality goods, potential antitrust lawsuits, and employee treatment.

“Understanding the role of a company in its community, in terms of how the company treats employees, sustainability issues, etc., will become even more important,” she said. “Given the controversy surrounding some of these issues in the past under Bezos, it’s fair to say having a new leader here might be a benefit.” 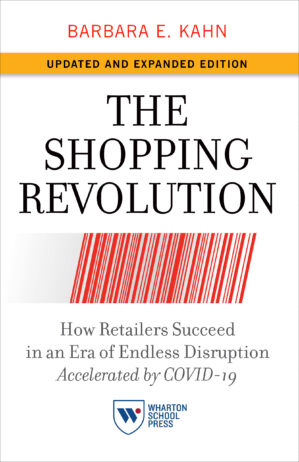 Get The Shopping Revolution, by Barbara Kahn.