What's Driving Americans to Retire Abroad? Money - or Lack of It - Knowledge@Wharton

What’s Driving Americans to Retire Abroad? Money — or Lack of It 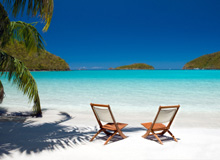 In the small town of Cotacachi, Ecuador, Dan Prescher is living out his retirement dream. Prescher, a native of Omaha, Neb., lives with his wife in a condo in a gated community overlooking the Andes Mountains. They eat fresh fruits and vegetables year round. They spend their free time hiking to hot springs and frequenting local restaurants. They keep up with their families and friends back in the U.S. via Skype and Facebook. Their costs are modest: They bought their condo three years ago for $50,000. Food is inexpensive. They don’t own a car, so for a night out they take a 25-cent bus ride into town. Although Prescher is not officially retired — he and his wife are both writers — he has no plans to return to the U.S.

“Every now and then, [my wife and I] think it would be nice to have a place in the states, so we run the numbers,” says Prescher, who is in his late 50s. “But because of the high taxes, medical costs and insurance, we just can’t figure out a way to live as affordably as we do here. The cost of living is half of what it would be in the U.S.”

In the aftermath of the global financial meltdown that ravaged 401(k) accounts and decimated home values, a growing number of Americans — like Prescher — are stretching their retirement savings by spending their golden years overseas. Beckoned by foreign countries with mild climates and a lower cost of living, many retirees view living abroad as the fulfillment of a life-long dream. Some are former snowbirds who opt for a Caribbean island or Latin American country; some seek out charming villages in Portugal or Spain, and others have landed in more exotic locales, such as Malaysia.

“Large numbers of people live where they live because of their jobs,” says David Reibstein, professor of marketing at Wharton. “When they’re not working anymore, they make the decision to move to a more comfortable climate and some place to make their dollars last longer…. One of the things that used to happen is that families stayed together in a general area. But in today’s economy, your children are no longer tying you to a certain [location]. It allows you to think more broadly about where in the world you might want to live.”

Stretching Dollars in a Foreign Land

The precise number of people retired overseas is hard to come by. About 350,000 American retirees receive Social Security benefits in countries other than the U.S., according to the Social Security Administration’s annual statistical supplement. The majority of those people live in Europe, Canada and Mexico. Anecdotal evidence suggests that this number will rise: As many as 3.3 million American baby boomers are planning to retire abroad, according to figures from Travel Market Report, the industry publication. Three years ago, the paid subscription base of International Living, a magazine for retirees who live overseas or plan to, was 39,000; today, it’s 80,000.

What’s driving them abroad? Money — or lack of it. Americans’ confidence in their ability to afford a comfortable retirement is at historically low levels, according to this year’s Retirement Confidence Survey, conducted by the Employee Benefit Research Institute. Only 14% of workers said they were “very confident” they would have enough money to live comfortably in retirement, according to the survey.

The loss of confidence is understandable: According to a study by the Federal Reserve published June 12, the global financial crisis erased 18 years of gains for the median U.S. household’s net worth. From 2007 to 2010, the S&P/Case-Shiller U.S. Home Price Index dropped 23%. Retirement accounts — important supplements to Social Security and other types of retirement income — were also badly hit. During the same three-year period, the Standard and Poor’s 500 Index lost 14% of its value.

But Andrew Bender, a travel and food writer who pens the Seat 1A blog for Forbes magazine, cautions that while many countries may offer an ostensibly lower cost of living, there could be other hidden expenses that add up. This is particularly true of emerging market countries, where local items are relatively inexpensive but imported items may not be.

He cites a phenomenon he calls the Palm Springs Syndrome. “People from Los Angeles look at the real estate values in Palm Springs [two hours inland] and say: ‘I’ll retire there because it’s cheaper.’ But they overlook some factors that could make the cost of living in Palm Springs more expensive. The big one is air conditioning, which is an absolute necessity for months on end when temperatures are well over 100 degrees. This, alone, could cost several hundred dollars a month and cancel out any cost savings over living in LA.”

Bender says that the Palm Springs Syndrome could apply to living overseas as well. Consider, for example, the cost of travel: “If you’re living in other parts of the world and have to travel back to your old hometown regularly, that’s a cost. Airfares serving remote destinations tend not to be cheap, and when you arrive stateside, everyday costs — hotels, just for starters — are bound to be a lot more expensive than in your new home.”

Indeed, the wonderfully romantic notion of moving to a foreign country sometimes conflicts with the harsh practicalities of expat life, including currency and tax issues, political instability and personal safety in the new destination. Bender suggests that retirees considering a move abroad should think hard about whether they could give up the public services and creature comforts they depend on. Are things like electricity, water, telephone and the Internet reliable? Are you prepared to give up Heinz ketchup and Ben & Jerry’s ice cream?

“Going to a country for a week as a tourist is very different from living there,” says Bender. “I’d think about: What’s your day-to-day life going to be like? Do you speak the language? How will you get around? What happens if the refrigerator goes out? How’s the shopping?”

One of the most pressing financial concerns facing prospective retirees is whether they will have enough money to pay for medical and long-term care expenses. Health care costs have risen rapidly over the last decade and show no signs of abating. A 65-year-old couple retiring in 2012 is estimated to need $240,000 to cover out-of-pocket medical expenses — the costs not covered by Medicare — throughout retirement, according to the latest retiree health care costs estimate calculated by Fidelity Investments. This represents a 50% increase from 2002, when the estimate was $160,000.

Out-of-pocket medical costs are likely to continue to rise, says Olivia S. Mitchell, a Wharton professor who specializes in health/retirement analysis and policy. “Nobody knows how the U.S. will ultimately resolve its fiscal problems,” she says. “Medicare and Social Security are the biggest drain on the budget. I believe that more of the retiree health care cost burden will be borne by consumers in the form of higher co-pays and higher premiums in the future.”

Many countries offer subsidized national health care. Depending on citizenship and age requirements, foreigners are often eligible for the programs, and the level of medical care is generally quite high. “Medical tourism is becoming very popular to Singapore, India and Thailand,” says Mitchell, executive director of the Pension Research Council. “Many of the doctors in those countries trained in the U.S., and the costs might be a quarter of U.S. fees.”

Mitchell notes that some retirees might consider a phased approach to living abroad in retirement. “It could be a good strategy to live abroad during your first five to 10 years of retirement, when you’re more active and your medical needs are not all that great,” she says. “But some people are likely to return to the U.S. when they become less independent. For instance, you may need to live closer to where you have family to help you manage your affairs, and when you need more constant care.”

A Thirst for Adventure

A lower cost of living and access to health care aside, many boomers are drawn to overseas retirement for emotional reasons. After years of staying in a place because of their jobs or their children, they seize on living in a foreign country as their last shot at excitement. “People look forward to retirement for living out adventures,” notes Wharton marketing professor Cassie Mogilner, whose research focuses on happiness, time and money. “It’s why so many people say they plan to travel the world when they retire.”

It’s a lifestyle that exposes people to new places, personalities and experiences. For those with an adventurous streak, living abroad is something they think will make them happy. According to Mogilner’s research, however, that may not be the case. In a series of five studies involving people ranging from teenagers to 80-year-olds, she found that for young people, happiness is about excitement and experiencing new things; as people get older, they associate happiness more with calm and contentment. “Happiness [for them] is derived from surrounding yourself with what’s familiar, savoring small moments and especially spending time with the people you love. That’s what gives you a calm and contented feeling,” she says.

In other words: Those who retire abroad for the adventure may be overlooking the fact that that choice involves leaving their family and the people they are tied to — friends, kids and grandkids. “You might underestimate the importance of those relationships, particularly as you get older,” she points out. “Although technology has definitely helped us to stay connected irrespective of geographic distance, it’s not quite the same.”

Mogilner’s research has other, more positive, implications for how happy retirees would feel living in a foreign country. Her studies suggest that the disparity in how young and old people view happiness appears to come from the degrees of importance those two groups place on the future and the present. Younger people are generally more focused on the future — probably because their futures are longer — and therefore base their happiness more on excitement. Older people place a higher value on the present moment. So if retiring abroad allows one to enjoy the present moment with more ease than retiring in the U.S. would, it could lead to greater happiness.

“Older people tend to value small moments — like being in nature, sitting in one’s garden, enjoying a seaside view and even walking outside. They tend to find serenity and peacefulness in that environment,” she notes.

Perhaps the biggest reason retiring abroad could lead to greater happiness goes back to money and health. Chronic stressors — anxiety about financial strain for instance — can make healthy adults more prone to illness. Persistent stress is linked to an increased risk for heart disease and other serious health problems.

“We know that stress and anxiety play a big role in people’s happiness, particularly at the stage of life where happiness is intimately tied to calm peacefulness,” says Mogilner. “To the extent that your financial situation is contributing to your stress and you can remove those stressors [by retiring to a place where your cost of living is much less], it could lead to greater happiness.”

Prescher, for his part, has no regrets about leaving Omaha behind. And he expects more American seniors living on fixed incomes will make a similar choice in the years to come. “No matter how you are doing financially — with your 401(k) or other investment accounts — if you can instantly cut your cost of living in half or more, that’s money in the bank,” he says. “It takes a sense of adventure and appetite for risk. You have to learn some patience. But other than that, it’s not a hard decision to make.”

What’s Driving Americans to Retire Abroad? Money — or Lack of It. Knowledge@Wharton (2012, July 18). Retrieved from https://knowledge.wharton.upenn.edu/article/whats-driving-americans-to-retire-abroad-money-or-lack-of-it/