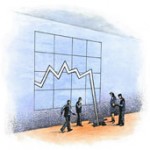 Check out the Dow Jones Industrial Average all the way back to 1896 and you’ll find that September is the scariest month – not October — despite the October 1929 crash, the large market fall in October 1987 and, of course, Halloween.

The record shows that returns on average fell 1.2% during the month of September from 1896 through 2008, compared with a 0.7% gain for all other months. And if you look at the returns on a decade-by-decade basis since 1901, you’ll find a similar story. September ranks dead last – number 12 – in six out of the 11 decades, and 10th in two others when it comes to average monthly returns. In two additional decades, it ranked eighth and ninth. That’s poor-to-entirely-dismal performances in 10 out of 11 decades.

True, there’s some ancient history factored in that data set, impressive though it is. What about more recently? Still not good. “Four times in the past decade alone, the S&P 500 shed at least 5% in September. The average September decline since 1950 is 0.6%, according to the Stock Trader’s Almanac. February is the next worst, with an average 0.2% loss, and December and November are the best, averaging 1.6% gains,” notes this article in the Huffington Post.

Why is September so bad? No one knows for certain. “I don’t know of any compelling explanation for the seasonality,” says Wharton finance professor Robert F. Stambaugh. No one seems able to point to a persuasive study offering a data-proven explanation.

And so, despite the strong pattern of selling bias in September, it could, nevertheless, simply be a random pattern – a coincidence. Still, there is no shortage of unproven theories explaining why September is a cruel month for markets.

“Some people say that September brings the reality of expenses to mind,” says Wharton finance professor Jeremy Siegel. “There are back-to-school expenses, tuition and vacation credit card bills to pay.” In some ways September is similar to January, when consumers face a spending hangover after big holiday spending.

Further afield, one theory, based on psychology, suggests the shrinking amount of daylight in September causes people to become more conservative in their spending, Siegel says. This might be akin to squirrels gathering nuts for the winter. In September, people “cash in stocks for liquidity,” and in September “daylight diminishes at a faster rate than in any other month.”

So what’s most likely to happen this month? Despite the long string of sad September stories for the Dow, Siegel thinks this time “might surprise on the upside.” And over the next four months, through year-end, Siegel would not be surprised if the Dow closed “15% higher” than yesterday’s levels.

The reasons: “I’m one of those people who thinks we will have a good last four months of the year, because I think the terrible outcomes – like recession in the U.S. and a European banking crisis — are not going to be as bad as some suggest. This is a slowdown and a disappointment – and it was not really forecast by most – but a slowdown is not the same as a recession. The private sector is still creating new jobs.”

Siegel adds that the market is already positioned for some very big shocks “that might not happen. I think the banking crisis in Europe will not happen to the degree the market fears. There may be some defaults and insolvencies,” but the problems will not “grind the banking system down to a crisis…. The ECB (European Central Bank) will come to the rescue.”