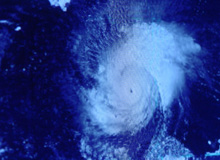 Although the U.S. public expects quick and massive government response to natural and man-made health disasters — including flu pandemics, hurricanes, tornadoes, terror attacks and mass shootings — federal and state legislative budget cutters have quietly eliminated 45,000 public health jobs during the last several years, according to Nicole Lurie, assistant secretary for preparedness and response at the Department of Health and Human Services.

That fact and its implications were among points Lurie emphasized in a video interview at the University of Pennsylvania, one of several such videos and podcasts being produced by the Leonard Davis Institute of Health Economics and the Robert Wood Johnson Foundation Clinical Scholars Program. In a discussion with Robert Wood Johnson clinical scholar Chileshe Nkonde-Price, Lurie noted that she has “a lot of anxiety about how we might go into a potential flu pandemic with 45,000 fewer people on the ground than we had with H1N1.”

As chief of the federal office responsible for orchestrating the country’s overall prevention of, response to and recovery from health-related emergencies, Lurie says one of her daily worries is that we too often take the public health emergency response infrastructure for granted.

“During an event like we recently saw in the Boston bombing, there were bystander responders, EMS, the emergency trauma care system, the public health system and the mental health system all working together,” she said. “But that doesn’t come from thin air. It has to be an in-place and robust day-to-day system that is adequately rehearsed and practiced. If you can’t do it every day, you can’t do it on game day — but that doesn’t happen without money.”

During the interview, Lurie and Nkonde-Price looked back on an extraordinary confluence of events during the third week of April. Those seven days included the Boston bombing, an explosion at a west Texas fertilizer plant and the bioterrorism scare sparked by the arrival of ricin-laced letters in a Washington, D.C., mail facility that services top federal offices.

Simultaneously, Lurie’s office was grappling with a potential pandemic of the new H7N9 bird flu that emerged in China and was still heavily involved in assessing the mental health impact of mass casualty events like the Sandy Hook school massacre and the devastation wrought by Hurricane Sandy across the Eastern half of the continent.

Her overall assessment of all these emergency response efforts was that “we did a lot better than we would have done a decade ago.” She added, however, that “Boston is a medically well-endowed community, and they handled this very well. But what if it were 10 times as many people? How would we have done? I don’t know.”

As for Hurricane Sandy, “It wasn’t something that people were as prepared for as they might have been,” Lurie said. “And because the population density was so high, you saw all kinds of things that caught people off guard. There were high-rise buildings that were out of power for weeks with medically frail people in them [and] people who had to go to mass shelters…. Had this been on a larger scale, how would we have done? If there had been simultaneous events, how would we have done?”

That’s why community resilience-building and public health preparedness activities are the “between times” way of “keeping those things going,” she said, adding that such things can’t be done without adequate personnel and budgets.

Lurie, whose office in the last two years has sponsored national contests for the development of Twitter and Facebook apps that can mine real-time health-related data, spoke about how that process is becoming an increasingly useful part of federal preparedness and emergency response efforts. She pointed out that one of the most important tasks during a mass casualty emergency is understanding the level and nature of community fears and addressing them as fast as possible.

“On the Friday after the Boston bombing — the day the city was locked down and the manhunt was going on — we were monitoring social media to understand people’s concerns,” she said. “It was interesting to see that the levels of fear and anxiety on Friday exceeded the levels of fear and anxiety we saw throughout the rest of that terrible week, including even the day of the bombing. It wasn’t that anyone was getting hurt on Friday, but lots of people were very concerned — and we had to find ways to adjust our messaging to address those fears and help the community stay calm.”

The HHS preparedness chief noted that her office would like to see more research on ways to enhance a real-time sense of what is happening on the ground in a major emergency. “That could be analyzing electronic health care records from the National Disaster Medical System that would enable us to pivot our response more quickly,” she said, “or using Centers for Medicare & Medicaid claims during and immediately after an event to get a handle on what’s going on and whether or not a community is overwhelmed.”

Another area of relevant research involves a more exact definition of what makes a community “resilient” during and after major emergency events. “We would like a better system for knowing how the community’s health care system is doing — is it overwhelmed or likely to become so?” she asked. “How would we know in real time? What does ‘resilience’ mean, and how to we build it? What are the factors that predict post-event recovery, and how can we position communities before and after an event to recover faster? What is the role of social media? How do you sort out signal from noise? And how do we foster a broader culture of bystander response in emergencies?” she asked, noting that bystander responders leaped to action and saved many lives in the initial minutes after the Boston blast.

“How do we get our less resilient and more vulnerable communities engaged in this?” Lurie asked. “Think of families where the only English speaker is a child. How do we think about children as assets rather than always as helpless victims?”

Lurie urged academic clinical scholars to get involved in emergency event response and sign up with the National Disaster Medical System. She suggested that becoming involved and identifying areas of potential research posed a series of intellectually interesting puzzles.

“If you wanted to do research related to a mass casualty event response, what would you need to do beforehand?” she asked. “How would you be poised and ready to go? How would you have a research network worked out if you don’t know where in the country the next ‘event’ is going to happen?”