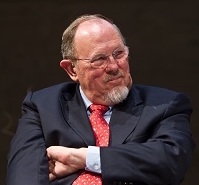 A Nobel Prize would seem to cap a career. But William F. Sharpe, longtime finance professor at Stanford, didn’t stop with the work on the Capital Asset Pricing Model, for which he shared the 1990 Nobel Economics prize. He went on to devise a groundbreaking way to gauge performance of mutual funds and other investment portfolios.

For that work, which produced the “style analysis” process widely used by asset managers, he has a new honor. At a May 20 ceremony in New York City, Sharpe will be awarded the Wharton-Jacobs Levy Prize for Quantitative Financial Innovation. The prize is awarded every other year by The Jacobs Levy Center at Wharton, which sponsors conferences and research to improve the understanding of the financial markets and asset management.

The six-member selection committee chose Sharpe to recognize his technique for gauging a portfolio’s performance against a comparable basket of indexes, said committee chair Bruce I. Jacobs, principal and co-founder of Jacobs Levy Equity Management, an institutional asset management firm based in Florham Park, NJ.

Sharpe’s process is essential to determining how well a mutual fund manager is doing, said committee member John Ameriks, principal and head of the Quantitative Equity Group at The Vanguard Group, the mutual fund giant.

“This is the seminal paper on how to think about performance of managers, the fundamental drivers of that performance and trying to understand it in the real world,” Ameriks said, adding: “It has a very direct influence on what [Vanguard] does every day and over time … to pick better managers and have a more salient understanding of the drivers of performance.”

Sharpe, then Timken professor emeritus of finance at the Stanford Graduate School of Business, shared the 1990 Nobel Prize for Economics with Harry Markowitz of the City University of New York, and Merton Miller of the University of Chicago, for work that produced the Capital Asset Pricing Model. CAPM, as it is usually called, is used to determine whether an investment offers enough expected return to justify the risk involved. Sharpe also developed the well-known Sharpe Ratio, a way of calculating return, adjusted for risk, relative to what could be earned in a risk-free holding like a U.S. Treasury bill.

“This is the seminal paper on how to think about performance of managers, the fundamental drivers of that performance and trying to understand it in the real world.”  –John Ameriks

For Sharpe, the Wharton-Jacobs Levy award is a pleasant reminder of work done in the 1980s and 1990s, and the announcement forced him to dig out his key paper on style analysis – “Asset Allocation: Management Style and Performance Measurement,” published in the Journal of Portfolio Management in 1992. It was the final version of a paper first published several years earlier.

“I had the usual thing that happens when you read a paper you wrote 20 years ago or more – mixed reactions,” he joked in a recent interview. “I wrote pretty well then. Why don’t I write as well now?”

His work on the topic began in the mid-1980s when he and the Frank Russell Company, an investment management firm, were looking for a better way to help pension administrators gauge the performance of the various asset managers they had hired to invest pension funds.

“How can you get your arms around all that and make the decisions that you, the pension manager with your board, have to make? That was the charge,” Sharpe recalled.

Assessing the performance of a holding like an individual stock is fairly easy. You know how much its price has gone up or down, and you can compare that with similar stocks or a broad gauge like the Standard & Poor’s 500 Index. But assessing a portfolio containing dozens of stocks, or perhaps hundreds, is much more difficult, since the basket of holdings might not be comparable to any given index. The fund might hold a mix of growth and value stocks along with small-company and foreign stocks, all jumbled in with big-company stocks. And the percentage allocated to each type could change over time.

To make the problem even more difficult, fund managers, for practical and proprietary reasons, do not disclose every trade. They may report their holdings from time to time, but the portfolio’s composition may be quite different in between reports.

So how do you gauge performance when there is no single benchmark and you don’t even know what the fund owns?

“My interest in the past several years now has been on retirement income for, quote, ordinary people.”  –William F. Sharpe

Sharpe said he turned to a kind of office game that he and his colleagues had been playing for several years: trying to deduce the assets in the fund on the basis of its recent performance. In a simplified example, if small-company stocks had done well while all other stocks did poorly, then a fund that did well probably held a lot of small-company stocks.

By adding more and more factors to this basic principal, Sharpe developed a system that could figure the contents of a fund – its investing style – even if it contained a vast array of holdings.

Regarding the assessment of fund managers, “what you do is you take, say, the last 60 months, figure out what was the style then, and then compare the performance a month hence,” he explained. If the fund beats this custom-made benchmark in the subsequent month, and continues to do so fairly regularly, the fund manager is doing a good job. Trailing the fund’s benchmark shows the opposite.

“We basically thought that Bill Sharpe’s contributions are many and varied in the profession, both on the academic side and the practitioner’s side,” said awards committee member Christopher Geczy, director of the Jacobs Levy Center. He is also a Wharton adjunct professor of finance and the academic director of the Wharton Wealth Management Initiative.

Asked if he was surprised that his style analysis had become so essential to the asset management industry, Sharpe said that hadn’t realized that it had; he’d been thinking about other things.

“Now you can buy an index [fund] on any little corner of the market, many of them at very low cost. It’s much easier to be a passive investor, even if you want to tilt toward this or tilt towards that.”   –William F. Sharpe

“I must admit, I didn’t know how widespread it had become,” he said.

“My interest in the past several years now has been on retirement income for, quote, ordinary people,” he said.

Over the decades that Sharpe has been studying the markets, they have changed considerably. Securities are now traded internationally, derivatives like options have bigger roles, and investors can now choose from a vast array of mutual funds and exchange-traded funds, not just individual stocks and bonds.

Though Sharpe has spent his career dealing with issues that matter to professional money managers, he believes ordinary investors do best with a simple investing strategy relying on index funds. Unlike actively managed funds, which seek hot holdings, index funds simply buy and hold the assets in a standard gauge like the S&P 500, typically gaining an edge over managed funds because of low fees. Sharpe said his work with style analysis showed that few asset managers can beat their benchmarks consistently, a conclusion reached by many other studies.

“Now you can buy an index [fund] on any little corner of the market, many of them at very low cost,” he said. “It’s much easier to be a passive investor, even if you want to tilt toward this or tilt towards that.”

The small investor, he says, should refrain from trying to spot the next hot stock or market trend.