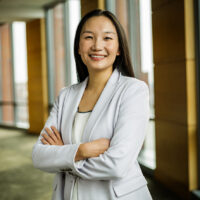 Wharton’s Lynn Wu talks about her research on how automation is reshaping the workplace in unexpected ways.

If you’re worried that robots are coming for your job, you can relax — unless you’re a manager.

A new survey-based study explains how automation is reshaping the workplace in unexpected ways. Robots can improve efficiency and quality, reduce costs, and even help create more jobs for their human counterparts. But more robots can also reduce the need for managers.

The study is titled “The Robot Revolution: Managerial and Employment Consequences for Firms.” The co-authors are Lynn Wu, professor of operations, information and decisions at Wharton; Bryan Hong, professor of entrepreneurship and management at the University of Missouri Kansas City’s Bloch School of Management; and Jay Dixon, an economist with Statistics Canada. The researchers said the study, which analyzed five years’ worth of data on businesses in the Canadian economy, is the most comprehensive of its kind on how automation affects employment, labor, strategic priorities, and other aspects of the workplace.

Wu recently spoke with Knowledge at Wharton about the paper and its implications for firms. (Listen to her full interview in the podcast at the top of this page.)

Contrary to popular belief, robots are not replacing workers. While there is some shedding of employees when firms adopt robots, the data show that increased automation leads to more hiring overall. That’s because robot-adopting firms become so much more productive that they need more people to meet the increased demand in production, Wu explained.

“Any employment loss in our data we found came from the non-adopting firms,” she said. “These firms became less productive, relative to the adopters. They lost their competitive advantage and, as a result, they had to lay off workers.”

Armed with facts about automation, firms need to consider a bigger-picture strategy when bringing in robots, she said.

“The story is really about how do you leverage technology better to become more productive, to become more competitive? And how do you change your managerial firm practices so you can get the most out of your robot technologies?” Wu said.

Certain kinds of managers become superfluous as businesses increase automation, according to the study. The drop is simply an effect of modern technology, Wu said. As different tasks and processes are automated, human error is drastically reduced. So, too, is the need for close monitoring of that work by managers.

“Technology can generate reports on what the robots did, what material they used, and they can aggregate it at the firm level, division level, to get lots of different operational metrics very easily,” Wu said. “And those are the kinds of things that managers tend to do.”

“When you see a huge decrease in middle-skilled work and an increase in those extremes — high- and low-skilled labor — it means the type of managers you need to manage this new workforce will be different.”

Someone who supervises low-skilled workers can manage a lot more people when the firm brings in robots because of the standardization and efficiency. But the change is more ambiguous for managers of high-skilled workers. Those employees are typically responsible for innovation, rather than operations, which is harder to measure.

“In the next couple of years, you’re going to see huge industry turbulence, if you haven’t seen it already.” –Lynn Wu

“Highly-skilled professionals are very good at what they do, better than their managers. They don’t need managers to tell them how to do their jobs or make sure they arrive to work on time,” Wu said. “Managing high-skilled workers is much more like coaching or advising. Managers advise them to help them to achieve the best they can at work, and that kind of skill is very different from supervising work.”

The Revolution Is Inevitable

Wu said the robot revolution is “inevitable” given the leaps in artificial intelligence, machine learning, and other technologies rapidly transforming the workplace. She encouraged business leaders to embrace the change and explore strategies to maximize the benefits. For example, the study found that robots were associated with greater use of performance-based pay because automation reduces variance. In other words, it’s easier to meet production quotas when robots are on the job. Robots also reduce workplace injuries, according to the study.

Wu also urged business leaders to be mindful of their low-skilled workers. As a company automates and the middle-skill level shrinks, those entry-level workers lose upward mobility.

“In our old paradigm, we don’t expect people to stay on those jobs forever,” she said. “But now you notice that the career ladder is broken. There is no middle skill to go to. There are no supervisory jobs to go to. That means that the contract, where there is an implicit understanding that you will move up eventually from your low-skilled work, needs to be revisited because it’s changing.”