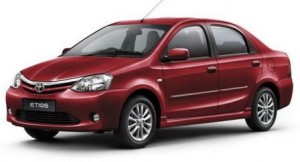 The automobile war in India is heating up. The newest car on the road is the Liva from Toyota, the world’s largest automobile company. Based on Toyota’s Etios sedan platform, the Liva hatchback is the automaker’s first entry into India’s small car segment. The Etios sedan was also designed with the Indian customer in mind. Toyota knows that if it can establish itself in India — the second-fastest growing auto market in the world — then it will be in a winning position on the global track.

The Japanese carmaker, which has been present in India since 1997 and has models like the Innova, Corolla Altis, Fortuner and others, has set up its second plant in India to manufacture the Etios and the Liva. Talking recently to the daily Business Standard, Sandeep Singh, deputy managing director of Toyota Kirloskar Motor (TKM, the joint venture between Toyota and India’s Kirloskar group), noted: “The [Etios and Liva] will help us gain critical mass in India.” Managing director of TKM, Hiroshi Nakagawa, added: “In the saturated markets of the U.S. and Japan, we have less room to grow.”

Toyota is not alone in looking at India to drive its growth. Practically every major auto company is moving in the same direction — and their sweet spot is the small car segment. Recent launches include the Figo from Ford, the Polo from Volkswagen, the i10 from Hyundai, the Beat from Chevrolet and the Spark from General Motors. More are expected to hit the road soon, including new entries from Maruti Suzuki, India’s largest car manufacturer, which already has seven models of compact cars in its stable.

Indian companies are not lagging behind, either. The Nano from Tata Motors, which created a huge buzz with its $2,000 price tag in March 2009, is back on track after hitting a few road blocks. A diesel variant of the Nano is also being planned. Meanwhile, Bajaj Auto has developed a prototype for a four-wheeler for the India market.

According to Sandeepan Banerjee, senior manager of corporate strategy at automotive manufacturer Mahindra & Mahindra, “If one looks at the demographics of India and the per capita income distribution, it is very clear that the automotive demand in the country is going to be very high. At the same time, the majority of the population cannot afford a sedan. So the huge opportunity is in the small car segment.”

According to a forecast by the Society of Indian Automobile Manufacturers, India’s passenger car segment is expected to see 16% to18% growth in 2011-2012 over the previous year. With growth either stagnant or in the low single digits in many of the global markets, India is clearly an important destination. Nearly 75% of total passenger car sales in India are in the small car segment.

Abdul Majeed, leader in the automotive practice at PricewaterhouseCoopers, believes that the rise of the compact car is not just an India story. He points out that rocketing fuel prices, growing congestion, stricter emission norms and heightened environmental concerns among younger consumers across the world will make the small car their preferred option. “In the developed countries, too, the small car will become the order of the day,” he says.

Meanwhile, it’s not just the Indian car buyer who is attracting the attention of global auto companies. With its talented and cost-effective labor pool, India is emerging as a strong innovation hub for automakers  and also a low cost manufacturing base. That’s a hard combination to beat. As Majeed notes: “The global strengths of auto majors will be known by their Indian strengths.”