For any leader, the ongoing presence of heroes is both a cause for celebration and a reason for deep concern, because it indicates a failure of the wider system, writes Wharton adjunct professor of management Gregory P. Shea in this opinion piece. Shea is co-author of Leading Successful Change, published by Wharton School Press.

On April 28, 2020, The New York Times reported the death of Lorna M. Breen, MD. She was the medical director of the Emergency Department at New York-Presbyterian’s Allen Hospital. She had been nostril deep in the COVID-19 epidemic, toiling at the center of the outbreak in the U.S., contracting the disease herself, and returning to work. She worried about the health of her colleagues as together they stood against the storm, even texting co-workers to inquire about their well-being while she was out sick. She died by her own hand. She had no history of mental illness. Her father summed it up: “She tried to do her job, and it killed her.” He also made a request: “Make sure she’s praised as a hero, because she was. She’s a casualty as much as anyone else who has died.”

Dr. Breen is, unfortunately, not an isolated case, although exactly how much so remains unclear. On April 3, Newsweek reported over 100 doctors and nurses had died worldwide combating the coronavirus; on March 30, Medscape reported over 60 physicians had died in Italy alone. On April 17, the Centers for Disease Control and Prevention posted that about 84% of COVID-19 patients lacked identification as to whether or not they were health care providers, hence cases reported likely constituted a “lower bound.”

On May 28, the CDC released new numbers based on data from 1,365,370 people, with health care personnel status available for only 21.1% of them. Of the 63,136 cases of COVID-19 among U.S. health care personnel, the CDC reported 299 deaths. Again, the number of reported deaths likely again constitute a “lower bound”: Death status was only available for 57.1% of these individuals, so the true number remains unknown.

In other words, we know that health care workers are paying dearly — one might say heroically — but we don’t know just how many, and how dearly.

Heroes travel with us across time and culture. We study them. We invent and reinvent them. We look to Ellen Johnson Sirleaf, Marie Curie, Nelson Mandela, Mahatma Gandhi, Chief Joseph, Yue Fei, Florence Nightingale, Saladin, Katherine Johnson, Odysseus, Simon Bolivar, Mohammad Ali, Mother Teresa, Martin Luther King, Abraham Lincoln, Malcolm X … and today, in these times, we look to the Lorna Breens. We aspire to live in some way as they have lived, even as we note their limits. From them, we draw energy and the hope that we can incorporate aspects of their lives into the living of our own. They are inspirational and curative.

Today, amidst the onslaught of a pandemic and sputtering leadership responses, we praise those in many roles as heroes, those who make special sacrifices on our behalf, even risking their lives to care for the stricken or to supply the well with food. They hold the system, indeed our society, together. They deserve our praise. No question. They deserve more, however. They deserve not to be heroes.

Heroism by the many or the repeated heroism by occupant after occupant of a given role indicates the failure of the surrounding system. Adequate supplies, for example, or prompt pre-emptive action would have changed the effort required of many health care providers from heroic to merely demanding. In that sense, the accolades, deeply deserved as they are, can serve to divert our attention from the less glamorous, indeed the mundane work of repairing the systems so that heroes need not show up en masse to hold together a wheezing and crippled health care system.

What lack of clear-headed, system-level leadership or even just competent management led to delays in acknowledging and then acting upon expert warnings? Where were the supply chain policies and protocols that we could have had to snap into place as needed to expedite a national approach to a national emergency? Where was the clear authority and decision-making structure to expedite the flow of vital resources? Where was, consequently, the gear, either medical (e.g., testing and ventilators) or personal (protective)? Where, in short, was the coordinated systemic response?

Health care providers and other essential service providers like grocers, truckers and sanitation workers deserve the cheers. More than that, they all deserve to go to work with the equipment and support systems that they need to perform safely the hard work required of them — the hard physical, psychological and emotional work. Most concretely, they likely would exchange the cheers for the gear. So too, would the workers in your organization.

In the world of management, Edward Deming famously cautioned against blaming individuals for what, in fact, constituted system failure (Out of Crisis, 1982). He went on, referencing Joseph Juran, “…most of the possibilities for improvement lie in action on the system, and that the contributions of production workers are severely limited.” Hence, replacing personnel alone seldom repairs a faltering system. New people may hold the system together through guile and sweat and even on occasion through tears and blood. They may receive recognition and reward. Ultimately, however, their valiant effort too often allows system flaws to persist even as those flaws consume the heroes who, for however long, overcame them. The stuff of legend. The ingredients of tragedy and grief. A rich irony.

Leading well includes managing well. Poorly operating organizations, short on execution, cannot excel more than briefly, if at all. They wither even in the face of the most wondrous of visions or ingenious of market analysis. Organizations amount to vehicles to achieve a vision, to blunt a threat, or to seize an opportunity. Repeated or large-scale heroism indicates the failure of key systems in the vehicle.

For any leader, then, the existence of numerous heroes is a cause for celebration on the one hand and for focused worry on the other. Their ongoing existence or large numbers are diagnostic. What system failure made them necessary? How can we avoid making so many again? The easier work is celebration. The harder, and more important, work is to make a spate of heroes unnecessary. That’s the work of a strong leader who appreciates the value of competent management and knows how to build the systems it requires. That’s an often-unheralded component of leadership. That’s also the central work of moving toward a better, less vulnerable, and more sustainable normal. 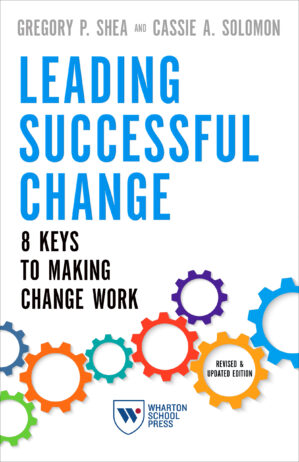 Get Leading Successful Change, by Gregory Shea and Cassie Solomon.