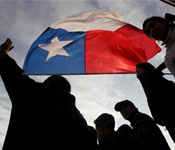 By now, the story is familiar: On August 5, 2010, 33 miners were trapped 2,000 feet below ground at the San Jose mine in Chile’s Atacama Desert. In their first 17 days without contact with the surface and for weeks thereafter, the miners organized themselves for survival under the leadership of foreman Luis Urzua with an unusual level of cooperation and unity. Meanwhile, teams of mining and other experts toiled above ground to find a way to free the miners. Given a 2% chance of a successful release that could take four months, all of the miners emerged above ground alive, just two and a half months later in a triumphant and improbable rescue.

While the true heroes of the crisis were the 33 miners who demonstrated uncommon grace under pressure, their dramatic rescue was the work of many others — from Chile’s new President Sebastian Pinera and the miners’ families to the many Americans, among others, who offered their technical expertise to excavate the men. In late February, the Smithsonian Institute’s Natural History Museum in Washington, D.C., hosted a panel discussion, moderated by Michael Useem, director of Wharton’s Center for Leadership and Change Management, titled “America’s Role in the Chilean Rescue.”

Complementing the museum’s exhibit “Against All Odds: Rescue at the Chilean Mine,” the discussion took a closer look at the contributions of U.S. experts to the mine rescue, featuring the stories of Ed Breiner, president of Schramm, based in West Chester, Pa., which supplied the drilling rig; Richard Soppe, senior drilling application engineer at Berlin, Pa.-based Center Rock, which provided drills; and Michael J. Duncan, former deputy chief medical officer at the National Aeronautics and Space Administration, which dispensed medical advice to protect the health of the miners. “We often talk about turning points or the defining moment when we see what we’re made out of,” said Useem about those who participated in the rescue effort. “Though you were not in charge, you did what you [needed to do]. That’s why one billion people were so eager to tune in.”

The evening started with recollections of the “untold” story from Roberto Matus, charge d’affairs at the Chilean Embassy in Washington, D.C.  Matus got a phone call in his Washington office from the Chilean government asking for a U.S.-made machine that could reduce the rescue time in half. (Drills located in Chile would take until December to reach the men, whereas the U.S. machine could possibly excavate them by October.) In three days, the rescuers at the San Jose mine received the machine, which was delivered on a plane by UPS for free.

Matus also described the flood of letters and gifts from Americans, including Apple’s Steve Jobs, who sent iPods for each of the miners. The Chileans decided to reserve the iPods as a Christmas present for when the miners got out, because “we needed the miners to work as a team,” said Matus. “If we sent the [iPods down to them], they would have isolated themselves. For now, we needed them to follow directions.” The Chileans also received from one U.S. company a box of 33 toothbrushes that were designed to provide effective cleaning with little movement — perfect for the unusually close quaters. “The response was amazing, massive and constructive,” said Matus.

Schramm’s Breiner chalked up the rescue’s success to an uninhibited exchange of ideas and information. “Technology, the free flow of trade and collaboration are what saved the miners,” he said. “There was leadership below the ground — people of character and faith sustaining themselves for 17 days [without knowledge that the outside world knew they were alive] — and people above ground exchanging [the] ideas … that made [the rescue] happen.”

NASA’s Duncan agreed. “It was the Chileans who brought all the teams together and deserve credit for the rescue” because of their willingness to seek outside input, he noted. Previously, Chilean leaders had met Duncan and NASA officials during a conference in Vienna, Austria, on the peaceful use of outer space. Three days after the miners were found alive, Chilean Minister of Health Jaime Manalich called Duncan to ask how the rescuers could apply Duncan’s expertise on the longer-term health and psychological issues of astronauts in space flight to the miners’ situation. Nine days later, Duncan and three other NASA personnel arrived at the mine to give their advice in person. Manalich and Mining Minister Laurence Golborne debriefed the NASA team, sparing no detail. “They told us everything … so we could use our best judgment to offer suggestions,” said Duncan. “Chance favors the prepared mind,” he added. “Each person involved in the rescue was prepared in his own way, and [our] expertise was brought together by this event.”

Soppe, whose company, Center Rock, supplied the drill that ultimately reached the miners, recalled the repeated, often heartbreaking, attempts to drill through to the right spot. After he heard the December rescue estimate, Soppe thought: “If we get the right technology, we could speed it up by four to six weeks.” Center Rock shut down its entire plant and rebuilt its equipment in three days — a process which would have normally taken three to four weeks, Soppe noted. “It was a function of teamwork. The faster we got through, the faster we’d get the miners out.”

Soppe and Breiner flew to Chile on September 3, vowing that “failure is not an option.” But the task was daunting: “We had to thread a needle 624 meters down through a five and a half inch diameter hole at the top,” said Soppe. “We drilled 40 holes before we hit the mine. The drilling tool was never designed to do something like this. We found out how we could break everything twice.” The miners helped by taking photos of the broken parts, sending them above ground so the engineers could redesign and tweak the devices for the next attempt. The day the drill broke through to the miners, “the minister of mining had an American flag put up for the six Americans at the drilling site,” he noted.

Why did the rescuers persevere when the chances were so small? In a summarizing statement, Nicolas Bar, cultural attache at the Chilean Embassy in Washington, noted that there is one basic concept behind why the world’s eyes –and experts — were focused on Chile during that time: “The importance of individual life.”