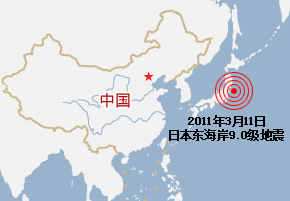 As the two-month anniversary of Japan’s 9.0 earthquake, tsunami and nuclear meltdown nears, there is still plenty of uncertainty about the full extent of the disasters’ economic devastation — not just in Japan, but also among its major trading partners.

Japan’s biggest trading partner is China, and this week, China’s stock markets fell for four consecutive days — the largest weekly decline since November — raising questions for some analysts about whether Japan’s woes were beginning to affect that country.

Of course, any losses within China are likely to pale in comparison with the damages that Japan must bear, which could reach as much as $300 billion. But they will add up, said Patrick Chovanec, a professor at Tsinghua University School of Management and Economics in Beijing, in an article published this week in China Knowledge at Wharton. Regarding how — or whether — recent events will have a significant impact on trade flow between the two countries, Chovanec predicted that “as the Japanese economy suffers, demand for imported goods from China will fall.”

The pace of trade between the two countries had recently improved despite unresolved tensions over, for example, China’s “rare earth” export embargo that has affected Japan’s high-tech firms. According to the Japan External Trade Organization (JETRO), bilateral trade was a record $30.3 billion in 2010, up 30% from 2009. China is Japan’s largest export market — Japan’s exports to China rose 36% year on year to US$14.9 billion in 2010, while imports from China totaled US$15.27 billion in 2010, up 24.7%. In terms of the types of goods that are in demand, electrical equipment — including semiconductor chips, electronics parts, and audio and telecom equipment — accounts for 23.5% of China’s imports from Japan, followed by machinery at 22.4%, chemical products at 14.5%, autos and auto parts at 10% and steel at 5.3%. Meanwhile, Japan’s main imports from China include electrical equipment — the largest category, accounting for 25.9% of the total — followed by machinery at 16.8% and textiles at 14.3%. According to JETRO, foreign direct investment from Japan into China reached $4.24 billion in 2010, an increase of 3% from 2009. It’s the forth-largest direct investor, after Hong Kong, Taiwan and Singapore.

Opinions vary as to how China’s supply chains are adapting to the unprecedented disruption. “For six months to a year, there will be serious disruptions in supply chains. But I would be surprised if the Koreans could not do what the Japanese are doing now,” Wharton finance professor Franklin Allen said in the China Knowledge at Wharton article. But Xianfang Ren, a Beijing-based China economist for IHS Global Insight, a research and information company, is not so certain, given the unique technology involved in making some components. “Chinese manufacturers may find alternative sources for general parts, but that may be impossible for parts that only one or two Japanese companies can make, and then there is no one to fall back on.”

Meanwhile, among Japan manufacturers, those in the auto industry are being watched particularly closely. On April 18, Toyota — the world’s largest automaker, with 8.42 million units sold in 2010 — resumed production at all of its 18 Japanese plants, after shortages of power and parts forced closures after March 11. The company said production from May 10 to June 3 will run at about half of its normal capacity, after which it will decide how to adjust production pending an assessment of its suppliers. That disruption will have a limited, if any, impact on China’s auto buyers since Toyota exports less than 50,000 vehicles to China annually. But the company does have three joint ventures in China selling around 900,000 vehicles a year locally, and on April 20, Toyota announced that it will cut production at those joint ventures until early June due to supply disruptions.

If supply disruptions continue for the rest of the year, China’s overall economic growth could be affected, say experts, although the situation involves many variables — including potential gains for some suppliers of steel and other construction materials as Japan begins rebuilding cities razed by the quake and tsunami. Other factors likely to have a more immediate impact are Beijing’s monetary policy tightening and the rising value of the renminbi, which crossed RMB 6.50 per dollar for the first time today. As Reuters reported, that’s a psychologically important benchmark for market watchers — and despite any Japan-related jitters, it may well have helped the Shanghai Composite Index reverse its decline of previous days.