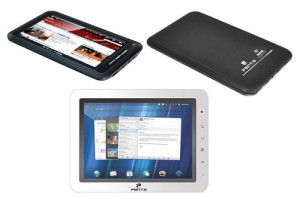 Frugal engineering, or the process of trying to reduce the complexity and cost of a particular product, has been fashionable in India for some time now. Today, even as Apple’s iPad, Samsung’s Galaxy and Microsoft’s Surface battle it out at the pricey end of the spectrum, the tablet wars in India are being fought at the bottom of the pyramid.

Prices are falling to very low levels. Canadian company Datawind has launched a $40 tablet, with schools in India being its target market. However, this isn’t Datawind’s first foray in the country. The Indian government ordered close to 2 million tablets, branded Aakash (sky), from Datawind as part of the National Mission on Education. These tablets were priced even lower — with subsidies, they cost $35 for students and teachers. But delivery delays, failure to provide customer support and other problems resulted in the government ending its association with Datawind. The company is now offering its tablets — branded Ubislate — on its own.

Unfulfilled promises might have toned down the hype around Aakash, but Union HRD Minister Kapil Sibal has announced that a new version — the Aakash 2 — will be available for students soon. “Hopefully, on November 11, you will see the President of India talking to 20,000 students from across the nation, who will have their hands on [an] Aakash,” Sibal said at the Economic Editors’ Conference held in New Delhi in early October. “At the moment, we are actually formulating a Cabinet note for the manufacture of five million Aakash tablets without any financial burden on the Ministry of Finance,” he added. Sibal hopes to price the tablet at $35 by setting up manufacturing facilities in India.

The tablet market, traditionally dominated by global leaders Apple and Samsung, is already beginning to feel the heat from local players. According to a Cyber Media Research (CMR) report released in mid-October, Indian company Micromax enjoys the lead in the country with an 18.4% market share. Second is South Korea-based Samsung with 13.3% and Apple with 12.3%. (Market share has been measured in unit shipments between April and June of this year.) Rounding out the top five are local players HCL and Karbonn. All the Indian companies have “affordable” (nobody uses the word “cheap”) devices. The Micromax range starts at slightly more than $100. Apple and Samsung tablets cost at least five times as much.

Other manufacturers have also recently entered tablet territory. The CMR report states that until the second quarter of this calendar year, around 90 vendors had launched tablets in India. The report also says the ASV (Average Sale Value) of the tablets in the second quarter of 2012 dropped to around $240 from $480 in the first quarter of 2012; most vendors have launched their products in the $90 to $180 price range. For example, startup WishTel priced its tablet — IRA Thing 2 — at $120. Noida-based Zync Global has a range that starts at $75. The government-owned Bharat Sanchar Nigam is selling the basic model of the Penta T Pad (manufactured by Delhi-based Pantel) for $75.

According to the report, “Landscape of Tablet PC market in India” released in mid-October by MAIT, the representative body for the Indian information technology and hardware sector, the market for tablet PCs in India is set to grow at 40% every year for the next five years. Last year, tablet sales stood at 1 million units. India is the “new blue-eyed growth opportunity”, says MAIT president Alok Bhardwaj. “[The tablet] is fast becoming one of the drivers of rapid growth in the IT content consumption and hardware sector in India.”

But does frugal engineering work for technology products? The “affordable” car — the Nano — is selling below expectations. The Simputer, a hand-held computer developed in 2002 for India as a low-cost alternative to PCs, was a disaster. Priced at $230, it was too expensive for the rural consumer. There were technological glitches, too. But frugal engineering seems to have worked for sectors including cell phones and printer cartridges, however.

Faisal Kawoosa, lead analyst for telecom at CMR notes that low-cost tablet vendors “have tried to put in everything in terms of features and functionality — even those not present in Apple. For instance, [the tablets] have USB slots. But whether that is working well performance-wise is a question mark. It is too early for us to judge.”