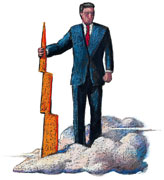 Indian conglomerate the Tata Group has finally found a successor to chairman Ratan Tata. The board of directors of Tata Sons, the holding company for the group, announced today that Cyrus P. Mistry has been appointed deputy chairman of the company. According to a statement by the group, Mistry “will work with Ratan Tata over the next year and take over from him when Mr. Tata retires in December 2012. This is as per the unanimous recommendation of the selection committee.”

In some ways, Mistry is an obvious choice. His father, the reclusive Shapoorji Pallonji, controls close to 18.5% of Tata Sons. This makes Pallonji the single largest individual shareholder. Most of the holding is with charitable trusts and the chairman of Tata Sons has always been the chairman of those trusts. Mistry is currently managing director of the $2.5 billion Shapoorji Pallonji Group, which is a big player in India’s construction sector.

But the 43-year-old Mistry is also a bit of a dark horse. He was never really mentioned as a candidate by the media during the search process, which has been going on for more than a year. The early favorite was Mistry’s brother-in-law Noel Tata, who is also Ratan Tata’s half brother. But Noel Tata was deemed to have moved out of the running after the senior Tata told the media that he felt that Noel Tata was too young to take on the chairman’s role.

“I don’t think that anyone had speculated it would be Cyrus Mistry,” analyst S.P. Tulsian told CNBC TV 18. “Ultimately, the family shareholder has emerged as the successor.” U.R. Bhat, managing director of Dalton Capital Advisors India, noted to Bloomberg that Mistry “is a sort of enigma.” Pradeep Mukerjee, founder-director of Confluence Coaching and Consulting, who has worked for several years in the HR area with Citigroup in the U.S., told India Knowledge @Wharton that the choice of Mistry is  “unexpected, but it is a good thing. The uncertainty has been laid to rest.”

Ratan Tata applauded the selection of Mistry. “[Mistry] has been on the board of Tata Sons since August 2006 and I have been impressed with the quality and caliber of his participation, his astute observations and his humility,” he said in a statement. “He is intelligent, and qualified to take on the responsibility being offered.” The chairman will mentor Mistry over the next year “to give him the exposure, the involvement and the operating experience to equip him to undertake the full responsibility of the group on my retirement.” Mistry is a graduate of civil engineering from Imperial College in London and has a master of science in management from London Business School.

“I feel deeply honored by this appointment,” Mistry said in a statement today. “I am aware that an enormous responsibility, with a great legacy, has been entrusted to me. I take this responsibility very seriously and in keeping with the values and ethics of the Tata Group, I will undertake to legally disassociate myself from the management of my family businesses to avoid any issue of conflict of interest.”

Mistry may well find himself in the sort of position that Ratan Tata was when he took over the reins from J.R.D. Tata in 1991. Ratan Tata had to fight against the entrenched chairmen of the larger Tata companies, who had become very independent during J.R.D. Tata’s tenure. The difference is that the Tatas had limited shareholding in the group companies at that time; Ratan Tata has raised group holding to a level that a takeover or a management-inspired secession is not possible. But there are many professionals in the group who thought they had a fighting chance of succeeding Ratan Tata. They may not make things easy for Mistry.

Mistry, too, will have to adjust. He is currently as low profile as his father or elder brother Shapoor. As chairman of Tata, an $83 billion group with operations in more than 80 countries, however, he will have to lead from the front.