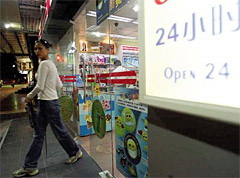 “Welcome! Come on in,” shouts a young sales clerk, one of 15 staff working at a 7-Eleven convenience store, or "c-store." The young man, clad in a jacket emblazoned with the chain store’s red, green and orange stripes, was sent to the 130-square-meter outlet in a business park on the outskirts of Shanghai for training in the finer details of customer service — a critical element in Taiwan-based President Chain Store Corporation’s strategy for getting a bigger foothold in China's crowded c-store market.

That particular outlet is the firm's flagship shop in Shanghai, which also serves as a training ground for staff, says Jackie Su, vice president of President Chain Store, which purchased the right to run 7-Eleven stores in the city from 7-Eleven China. “The most difficult task we face [in China] is training staff how to greet customers. This is something we do without any training in Taiwan…. [We take it] for granted," he says. "But they do not have this custom here.” Su — who joined President Chain Store in his native Taiwan back in 1992 — is betting that a welcoming atmosphere, along with high-quality products, will soon help 7-Eleven beat stiff competition in Shanghai.

Convenience stores have become a big feature of China’s increasingly affluent, youth-oriented consumer culture and run the gamut from hole-in-the wall, mom-and-pop shops crammed with soft drinks and snacks to modern purveyors using sophisticated analytics to keep their shelves stocked with all kinds of food. Total annual revenue at China’s 380,000 rural and urban c-stores is RMB 425 billion (US$62 billion), according to estimates by consultancy Access Asia using data from the China Chain Store and Franchise Association.

Shanghai leads the way, with about 5,000 outlets serving its 20 million inhabitants. It's not unusual for a single block in the city to have as many as three c-stores, sometimes one next door to another. Local chains there include All Days (Haode), Kedi, Quik (Kuaike) and Buddys. Quik, which is owned by Lianhua Group, is the biggest, with 1,300 outlets and about 25% of total sales in Shanghai. “Quik has become the largest [among home-grown firms] in terms of number of stores, having leveraged its local government connections and relationships,” says Yujun Qiu, retail analyst at Planet Retail, a London-based industry information provider.

But it's other large Asian rivals, notably Family Mart, which has 7-Eleven looking over its shoulder. Executive teams at both companies are now leveraging expertise honed overseas in what could become a retail showdown for Shanghai’s c-store sector.

Family Mart has had a head start in Shanghai — opening its first store there in 2004, and it now has 400 outlets. It chose Shanghai to launch its China strategy for several reasons. “The city has the biggest purchasing power in China and Shanghai is a city where you have to walk because of its many small alleys and roads, compared with Beijing,” says Mitsuyoshi Harada, vice president of Family Mart. Its Europe-influenced layout makes it easier for shoppers to stop by convenience stores for quick purchases than in Beijing, with its bigger scale, broad boulevards and heavier reliance on private cars to get around. What's more, Shanghai also has a high population density and a vibrant shopping culture.

Meanwhile, having fallen flat in earlier attempts to win market share in China's mainland, Japan’s 7-Eleven recently licensed full franchise rights for its Shanghai operations to President, a subsidiary of Taiwan’s biggest food conglomerate, Uni-President Group. For its China strategy, the Japanese firm focused first on Beijing,, where it now has about 92 outlets, and two in nearby Tianjin. Its Shanghai business, however, is catching up after launching in the city in 2009, with 54 outlets.

It's no coincidence that Shanghai's big c-store rivals hail from Japan, via Taiwan — over several decades, Japanese c-stores have built up formidable businesses in Taiwan, which has many cultural and language similarities with China. Replicating their Taiwanese strategies makes a lot of sense. “Both companies saw a great opportunity and a treasure trove in China,” says Harada.

But tapping that treasure trove has been easier said than done. Unlike relatively small and homogenous markets like Japan and Taiwan, China is vast and consumer tastes and buying patterns vary widely from city to city. “If you bring the business format you used in Japan to China, it won’t work,” says Harada, who was head of the overseas division at Family Mart’s headquarters in Tokyo before moving to Shanghai two years ago. "You have to develop a business format for Chinese lifestyles and tastes."

Although Shanghai is notoriously difficult in terms of bureaucracy and fickle consumers, the biggest challenge for the foreign c-stores is hiring and training staff. At the moment, it’s a "buyers' market," with jobs scarce for China’s increasingly plentiful college graduates, says Su. “We only hire college graduates and three-year junior college graduates, while local shops hire older women. Some of our shop managers have studied at universities in the U.S., Europe or Japan.”

But can the likes of 7-Eleven and Family Mart shake off the remnants of a retail culture still dominated by government-run enterprises? For the most part, Shanghai's home-grown retailers still have the business cultures resulting from previous decades of shortages and rationing, when shopkeepers wielded substantial influence over daily lives. Back then, customer service was also an after-thought, if at all.

Like 7-Eleven, Family Mart invests heavily in training staff how to handle customers. “We have to teach [staff] basic manners, from saying, ‘Thank you for coming to our shop,’ to things such as not just tossing purchases at shoppers,” Harada says from the downtown Shanghai offices of Family Mart’s local partner, Taiwanese food company Ting Hsin Group.

Locally owned stores tend also to stock low-quality products and offer less choice, shortcomings that the foreign-owned and managed companies are exploiting to their advantage. Daily sales tend to be between RMB 3,000 and RMB 4,000 at a locally owned shop, says Qiu, or about half that of Family Mart or Lawson, another rival foreign chain.

Lawson, Japan’s second largest c-store chain, launched a joint venture with local retailer Hualian Group in 1996, but reduceditsmajority stake of 70% a few years later. Problems arose in 2004, says Harada, after government reforms permitted franchise stores. “They were able to increase the number of stores and sales, but they lost their good service and quality,” he says. Hualian now holdsa 51% majority stake in the joint venture and managerial control of Lawson in Shanghai, with about 70% of its 325 outlets in the city now run asfranchises, rather than under direct management.

Family Mart has moved more cautiously, despite its familiarity with the franchise model in other markets — in Taiwan, franchises account for 85% of all chain stores, and in Japan, about 90%. “We do not expand at the expense of downgrading the service and general quality of our shops,” Harada says. Yet, he concedes, “If you want to become the number one c-store in China, you have to have successful franchise stores. The most difficult thing is managing them.” About 40% of Family Mart's Shanghai outlets now are franchises.

7-Eleven, through President, plans to increase its outlets in Shanghai to 150 by the end of this year and 300 by the end of 2012. While eager to expand, the company is also wary of the challenges of running a business based on franchises. “I understand our company can earn big franchising fees if we expand franchises quickly. But we are not yet ready to start franchises here in Shanghai,” Su says.

Nonetheless, Su says 7-Eleven will let some of its staff become franchisees later this year as a pilot project. But the transition will be a careful one. “To maintain good service and good quality after franchises are launched, you have to have proper control and detailed contracts so that the franchisees abide by the rules and allow continued supervision," he says.

As in other sectors such as services, foreign c-stores in China have leaned heavily on their Taiwanese subsidiaries. Harada credits Family Mart’s thriving business to his Taiwan staff — their ability to handle both Chinese and English-speaking cultures and their success back in Taiwan. 7-Eleven, which is the biggest c-store chain in Taiwan with 4,800 outlets and 30 years of experience, brought 14 of its Taiwan staff to Shanghai. Among them were seven of the company’s best managers. “Those Taiwan store managers stand next to staff and managers at local Shanghai stores and teach them by showing all the details, from how to greet customers to how to keep inventory,” Su says.

Perhaps the strongest advantage conferred by the Taiwan connections is the relationships that the food companies bring to retail outlets. Suppliers are their lifeblood. Family Mart’s partner Ting Hsin, for example, owns the well-known instant noodle and drinks brand Master Kong, or Kangshifu. “Ting Hsin is very, very important for Family Mart’s success in Taiwan and China because the company can provide help in finding supplies and a ready-made supply chain for the convenience stores,” says Planet Retail's Qiu. Taiwan Family Mart is a minority shareholder, providing help with human resources. Minor shareholder Itochu, a well-connected Japanese trading house in China, helps with distribution and supplies for readymade foods.

Similarly, 7-Eleven in Shanghai relies on Uni-President Group, which has 24 beverage and instant noodle factories and 10 other food plants in mainland China. (President Chain Store also runs Starbucks and Mister Donut outlets in Shanghai.) More than 30% of revenue at both 7-Eleven and Family Mart come from nakashoku, or box lunches, making quality supplies and timely deliveries crucial: C-store meals have become a staple for white-collar workers wanting an affordable, but relatively high-quality alternative to the lunches sold by bicycle cart vendors.

Despite those similarities, Su says 7-Eleven’s strategy for Shanghai differs from its rivals in important ways. Each store is a minimum of 120 square meters, about twice as big as other local c-stores. (Family Mart's are about 100 square meters.) The shop fronts are at least eight meters wide and look bright and spacious from the street. Carefully chosen locations and layouts and a good product mix have also been important for sales, Su says. “Our store sales per day are twice Family Mart’s, 2.5 times those of Lawson and triple those of the local chain stores,” he contends. (Family Mart and Lawson declined to provide daily sales data.)

In response to Family Mart’s popular oden — Japanese-style stewed fish-paste on a stick — 7-Eleven also offers hot meals prepared by in-house cooks. All 7-Eleven stores in Shanghai have coffee shops called City Café, a transplant from Taiwan, which serves coffee and tea for takeout at half the price of Starbucks. Some Family Marts have similar shops.

Su's immediate goal is to reach profitability by 2012. And in the longer term, President Chain Store wants to expand even further around Shanghai. While President runs stores in the Shanghai area, Hong Kong 7-Eleven is operated by Hong Kong Company Dairy Farm, which has about 950 7-Eleven stores in Hong Kong, 40 in Macao and 116 in Guangzhou. 7-Eleven Japan announced in October that it has set up a wholly owned company, 7-Eleven Chengdu, which plans to open stores in that western city in the spring.

Family Mart likewise aims to expand across China, though Harada says the company is still plotting its strategy. The company’s Tokyo-based president, Junji Ueda, has said Family Mart is aiming for 4,500 shops by 2015 and 20,000 by 2019. It now has 400 outlets in Shanghai, 31 in the Suzhou and 80 in Guangzhou. “There are many cities we want to expand into, but we have not decided where yet,” says Harada.

Because Shanghai has 5,000 convenience stores right now, those targets assume a huge amount of growth, and a consequent loss of market share for the local convenience store operators. Su is confident that such Darwinian changes are inevitable. “Those who provide good service and a good product mix will replace those old-fashioned local convenience stores,” he predicts. “There will be a ‘natural selection’ among c-stores in Shanghai.”