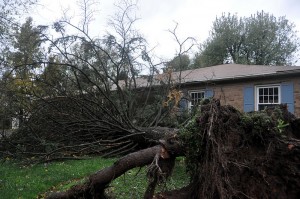 The photos, damage reports and human interest dramas are today’s top story across many media outlets in the aftermath of Hurricane Sandy, whose broad geographic reach has ensured it a place in the hurricane history books.

What one word would Wharton professor Howard Kunreuther, co-director of Wharton’s Risk Management and Decision Processes Center, use to describe Sandy? “Horrendous,” he says. “It’s the worst of the century because of a combination of factors – its incredible reach along the East coast, its incredible damage to New York City and Long Island and the incredible amount of flooding along the New Jersey coast, including Atlantic City.”

While some industry experts estimate that Sandy will cost the economy between $10 billion and $20 billion, Kunreuther says he has heard that the number could be as high as $50 billion. “It all depends on how quickly power can be restored, he says. “Business interruption risk could be very severe if it takes a long time for some companies to start functioning again.” The $20 billion figure could balloon up to $30 billion or $40 billion, “and we still haven’t estimated a lot of the damage yet.”

Financial services is one industry that suffered obvious disruption. The stock market closed for two days, and much of lower Manhattan remains waterlogged. At the same time, it is difficult to estimate the damage because “so much is being done off site but online, including stock transactions,” says Kunreuther. Getting a more complete understanding of this sector – as well as others, ranging from retail and manufacturing to construction and energy — will help determine some of the answers.

Weather experts compare Sandy with a hurricane in 1938 (before hurricanes were given names) that caused significant damage but missed New York City, and with the Galveston, Tex., hurricane in 1900 which killed more people than Sandy (approximately 8,000 deaths compared to between 50 and 60 for Sandy in eight U.S. states and 52 deaths in Haiti), but was limited only to that city. What has been so devastating about Sandy, says Kunreuther, is its huge swath – more than 800 miles – up and down the East coast and inland as well.

Other more recent hurricanes, such as Irene and Katrina, were also catastrophic but had one positive impact, Kunreuther says. “They set the stage for the mayors and governors of the states in Sandy’s way to do what they did, which was to say, ‘Let’s take steps to make sure we are protected; let’s get everyone evacuated; let’s close down the transportation systems in New York and Philadelphia. Even the University of Pennsylvania was closed. [These officials] did the right thing.”

And they can continue to do so, Kunreuther says. New Jersey governor Chris Christie has already talked about rebuilding the shore in New Jersey — making sure building codes are enforced, houses are well designed and appropriate land use regulations are put in place. “This is a target of opportunity,” Kunreuther adds. The best time to make progress is right after a disaster, “when people are paying attention.” Ironically, Hurricane Andrew, which devastated parts of Florida in 1992, also had a positive impact in that the state now has one of the country’s toughest codes for both existing and new buildings.

As for business leaders, “obviously everyone will be aware of the importance of having backup computer systems, extra supplies in other places, anything they can do to protect themselves in case their building is either flooded or is inoperable due to power outages,” Kunreuther says.

Opportunities also exist for the insurance industry in Sandy’s wake, he adds.  “We know that people in many areas are required to buy flood insurance, but they often don’t.” That situation may change with action by the U.S. Congress in July to renew the National Flood Insurance Program (NFIP) for another five years and authorize a study on the role that risk-based premiums and means-tested insurance vouchers can play in the future.

This action relates to principles that Kunreuther and Erwann Michel-Kerjan, managing director of the Risk Management and Decision Processes Center, articulated in their book, At War with the Weather.