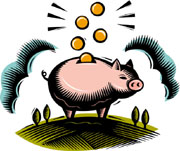 In a book published last Thursday, Retirement Heist: How Companies Plunder and Profit from the Nest Eggs of American Workers, Ellen Schultz, a reporter for The Wall Street Journal, analyzes how large companies — along with the whole retirement industry, ranging from benefits consultants to life insurers — have been bilking American workers out of the health benefits and pensions they have earned during years of employment.

“A little over a decade ago, most companies had more than enough set aside to pay the benefits earned by two generations of workers, no matter how long they lived. But by exploiting loopholes, ambiguous regulations and new accounting rules, companies essentially turned their pension plans into piggy banks, tax shelters and profit centers,” according to a description of the book on Amazon.com, which goes on to note that the damage isn’t limited to any one group: “Employees of all political persuasions and income levels — from managers to miners, pro-football players to pilots — have been slammed.”

Olivia S. Mitchell, executive director of Wharton’s Pension Research Council, notes that “during the 1980s, many corporations benefitted from the run-up in the stock market, and prominent firms, A&P being one, terminated their defined benefit plan, took the excess assets and ended up plowing them back into the company to upgrade the stores. A&P was the one that got a lot of attention because it was in conjunction with its purchase by a German supermarket chain. So there was a lot of discussion over whether this should be allowed.”

U.S. law, Mitchell says, “still permits some asset reversion of this type, although there are now penalties associated with overfunded termination. This naturally has really put a damper on reversion of excess assets. Also, most defined benefits plans are now underfunded.”

Even more important, Mitchell notes, has been the fairly rapid transition away from defined benefit plans toward 401(k) plans, partly because of a massive change in the labor market. “Employees come, stay for a short time and leave, and they are frankly not interested in a defined benefit plan with a 30-year to 40-year time horizon.” At the same time, many employers, like IBM, are also not interested in the defined benefit model. “They want turnover so they can get the newest, most frontier-trained engineers and software experts available.”

Kent Smetters, Wharton professor of business and public policy, agrees that “many of the changes in the private plans have reflected shifts away from defined benefit (pension) plans to defined contribution plans as a way to support greater mobility of the workforce. Traditional pensions are mainly compatible with jobs where people work at the same employer for most of their work life. They are hard to transport between jobs. The defined contribution model allows for that [rollover]. It is true that some companies potentially reduced benefits in the transition as they directly converted their defined benefit to defined contribution plans. But many of those conversions were ruled illegal or frozen.”

Asked about the conclusions presented by Schultz’s book, Smetters suggests that “the largely unregulated state and local public pension plans played lots of games. The real wholesale shame here [has been] with those plans, not the private ones.”

Another factor to consider in this discussion, says Mitchell, is that the U.S. government backs defined benefit plans through its own insurance agency, The Pension Benefit Guaranty Corp. PBGC “charges a premium, which has had to be boosted because of the underfunded status of American defined benefit plans. It is a vicious circle. If you have a plan and you are underfunded, then the plan is backed by the government insurance company, so there is relatively little incentive to fund it. And if you are thinking about starting a new defined benefit plan, heaven forbid you should take on the legacy costs that all the other companies are likely to impose on this insurance entity.” In fact, these days only very small employers — those with 20 or 25 employees, typically law firms, medical partnerships, etc. — have defined benefit plans because such companies are not required to pay into PBGC.

In Retirement Heist, author Schultz documents hardship stories of individuals who were denied the retirement benefits promised to them by their corporate employers. These cases might typically be ones “where companies have underfunded pensions, and the government only provides a basic guarantee,” says Mitchell, adding that these guarantees are hardly “six figure pension payments. I remember during the mid-1990s when one of the airlines went bankrupt, and its pilots were expecting $120,000 or $130,000 in corporate pension benefits. It turned out that the maximum benefit that PBGC would pay them was about $25,000.”

What has Mitchell and many others worried is that neither Social Security nor Medicare are in good financial shape, even though both are the cornerstones of retirement security. “The lack of attention at the federal level to fixing them is a grievous situation,” says Mitchell. “The current jobs proposal has a continued reduction in the payroll tax, in fact a greater reduction than was implemented last December. While I can understand the impetus for a stimulus, this does hasten the day when both programs run short of money.”