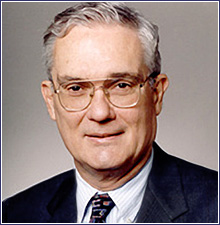 During a half-century career stretching from the dawn of the age of high-tech medicine to the eve of Affordable Care, former Wharton professor William Kissick was a larger-than-life figure “like Forrest Gump or Woody Allen’s Zelig,” recalls Wharton professor Arnold Rosoff. Rosoff is one of many faculty members who mourned the June 30 death of Kissick, who retired in 2001 after 32 years of teaching as a professor in three separate health-related University of Pennsylvania schools.

“He seemed always to have been in the thick of the action when something big happened,” Rosoff says. “Mention a significant milestone in the evolution of the U.S. health care system, and Kissick was there — in the second row of the crowd, standing close behind [Medicare architect] Wilbur Cohen and [President Lyndon B. Johnson] when Medicare was signed, for example. He was clearly made of the stuff that Tom Brokaw styled as ‘the greatest generation.'”

Prior to joining Penn in 1968, Kissick, who held four degrees from Yale, first came to national attention as an academic whiz kid in a seven-year stint with the federal government. There, along with other White House assignments, he was one of two physicians on a small team that wrote what became the 1965 law establishing Medicare. And for the rest of his professional life, he remained a nationally renowned expert on health care policy.

Recruited to Penn in 1968, Kissick played a pivotal role in new interdisciplinary scholarship initiatives focused on stitching together the curriculums of medical science and the business management of health care. This was triggered by the launch of Medicare and the realization that new sorts of research were needed to fill fundamental gaps in the evidence base essential to making informed policy decisions about the organization, management, financing and delivery of health care on such a large scale.

Toward that interdisciplinary goal, and with funding from a $4 million gift from Leonard Davis, the CEO of the Colonial Penn Insurance Company, Wharton established the Leonard Davis Institute of Health Economics (LDI). Simultaneously, and in a move that set a new national academic precedent, the incoming Kissick was named to professorships in both Penn’s School of Medicine and the Wharton School, and he was named to LDI’s governing board and soon became its long-time chair.

Within two years, LDI had organized and launched the Wharton Health Care Management Program — a curriculum designed to produce, among other things, graduates who had both MD and MBA degrees.

Kissick’s life and work is the subject of an in-depth article in the LDI Health Economist.