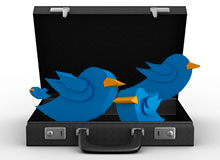 The frenetic pace of Twitter means that updates are often here now and then gone in seconds. Users of the micro-blogging site are rarely interested in content tweeted by followers for more than a few hours — or even a few minutes.

One way to extend the lifespan of a tweet is through retweets — essentially, by other people deciding to pass on the message or link. Wharton marketing professor Eric Bradlow, along with co-authors Tauhid Zaman from MIT and Emily Fox from the University of Washington, have come up with a model for predicting how many times an individual tweet will be shared within minutes of its initial posting.

When it comes to sharing content on Twitter, they note in a paper titled, “A Bayesian Approach for Predicting the Popularity of Tweets,” the pattern of retweets that occurs in the short-term is a pretty good indicator of how the message will perform overall. “The probability that a person retweets is positively related to the number of people that they follow,” Bradlow adds. It also depends on the degree of separation a person has from the user who made the initial posting, meaning a person is much more likely to have his or her content shared by an immediate follower than by followers of followers — or followers of followers of followers and so on down the line.

They compiled a set of 52 different tweets and then used Twitter’s search application programming interface (API) to find the retweets for each one. The data show that the lifetime of a single tweet is fleeting: Updates collected had between 21 and 1,260 retweets; the time when the last share of a particular message occurred ranged from a few hours to a few days. It took between four minutes to three hours for an update to reach 50% of its total retweet count — and most reached this median in less than one hour. For businesses that use or hope to use the site for marketing products or services, the findings “suggest that there can be short-term impact,” Bradlow says. “But to move the needle significantly, there will need to be multiple tweets and then each of them would have to spread virally.”

According to the researchers, the model has several different potential uses. “Because tweets are typically only actively retweeted for a few hours, the early predictions our model provides are key to detecting a popular tweet before it receives a large amount of retweets,” they write. “Also the similarity of the manner by which people spread content in social networks suggests our model’s early predictions could create a whole new source of impressions for online advertising on dynamic social network content with a finite ‘lifetime.'”

Twitter “is predictable,” Bradlow adds. “So if one wants to think about retweets as opportunities for ad exposures, then just like one pays for exposures on television, one can determine how much to pay for root tweets.”

He says that since the model predicts the interval of retweets, it can easily accommodate the addition of other variables, such as the time of day a tweet was posted or the number of followers a user (or that user’s friends) have. “Our model does well in prediction, but adding these other variables would add to the casual story,” Bradlow notes.