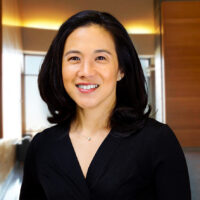 It’s easy to make a pledge to do better: to exercise more, study harder, eat healthier food or make responsible financial decisions. But making these changes stick – for a week, a month and, ideally for a lifetime – is a thorny problem that has confounded both average folks and scientists alike.

With the recently launched Behavior Change for Good Initiative, University of Pennsylvania psychology professor Angela Duckworth and Wharton professor of operations, information and decisions Katherine Milkman are hoping to come up with strategies for change that actually stick. Working with a team of scientists from different disciplines, they’re conducting some of the largest social science experiments ever in an effort to create easy, affordable tools that help people make better daily and long-term decisions about their health, education and savings.

One of their first efforts is focused on helping people establish regular exercise habits. In partnership with 24 Hour Fitness, which has more than 400 gyms and nearly four million members across the U.S., they have launched a program called StepUp. Duckworth and Milkman are hoping to recruit hundreds of thousands of current and new members of the chain to sign up for the program. Those who do will become part of a large-scale tournament in which scientists have developed 57 different paths they hope will lead to positive behavior change.

“A flip of a coin will determine which of the 57 different paths participants will take,” Milkman said. “We want to see which ideas truly yield the biggest changes in behavior, not just during the course of the program, which is 28 days, but in the year following it.”

“We want to see which ideas truly yield the biggest changes in behavior, not just during the course of the program, which is 28 days, but also in the year following it.”–Katherine Milkman

Milkman and Duckworth discussed the study and the Behavior Change for Good Initiative during a recent appearance on the Knowledge at Wharton show on SiriusXM channel 111. (Listen to the full podcast using the player at the top of this page.)

One of the things that separates the StepUp program from similar efforts is the scale – the partnership with 24 Hour Fitness gives the researchers a pool of millions of possible participants with diverse demographics. Milkman noted that with smaller-scale studies, it’s difficult to compare the outcomes for different groups, such as men vs. women or new gym members vs. veterans.

“The massive scale will allow us to slice the data in these different directions and still have lots of people left to give robust answers,” she said.

Members of 24 Hour Fitness can sign up through a website (https://24go.co/stepup) and will receive all communications via personalized text messages. Milkman noted that it was important to develop a program that reached participants with tools where they are already spending time.

“The reason this problem hasn’t been solved before and remains a really interesting area for inquiry is that there are so many competing channels for your attention. That’s something we’ve struggled with as we figure out the best way to build solutions,” Milkman said. “We’re trying to cut a lot of the noise out of the way so we can quickly iterate and build better prototypes.” 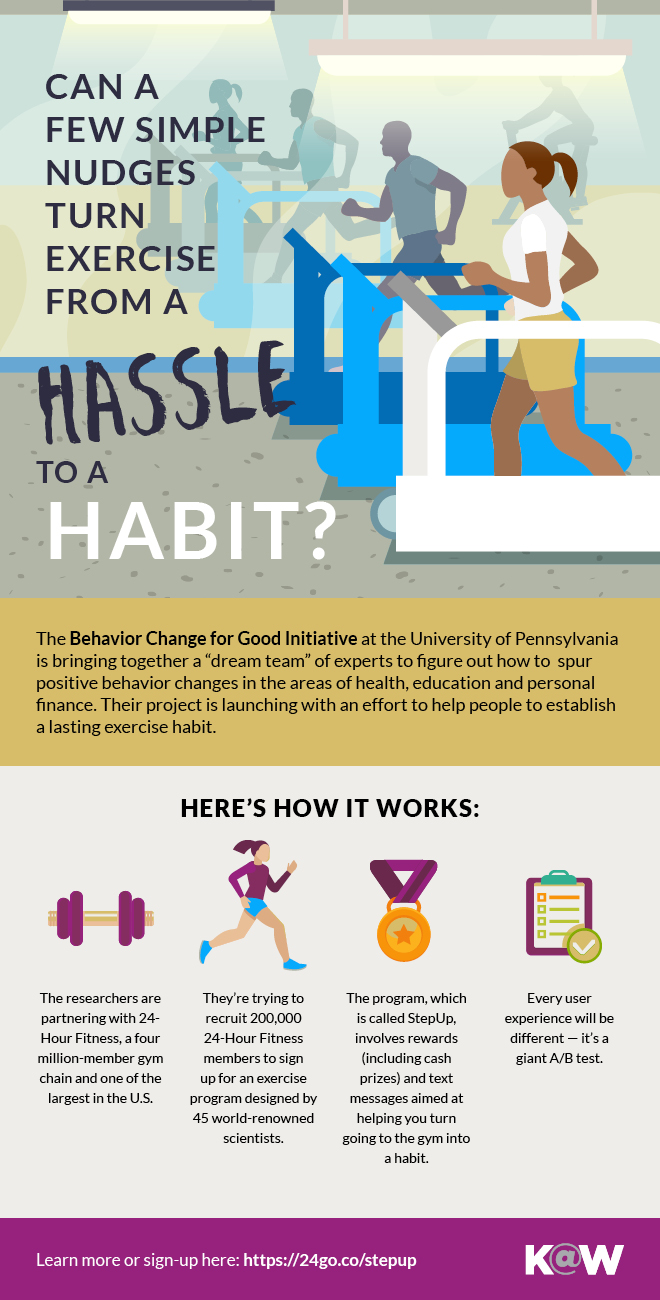 The StepUp program is just one of the large-scale social experiments being launched by the Behavior Change for Good Initiative, which was partly inspired by the discussions Milkman and Duckworth had when they walked to the Penn campus each morning.

They realized during those chats that there was great value in the points of view that Milkman, as a behavioral economist, and Duckworth, a psychologist, brought to the problem of creating lasting behavior change, and that a lot of progress could be made by bringing an interdisciplinary group together to study it.

“It’s not the power of one mind or even the power of two minds, Katy plus Angela,” Duckworth said. “It’s really the power of a network of world-class scientists from very different backgrounds: some are neuroscientists, some are economists, some are psychologists, and more. We don’t know which ideas are actually going to be more effective than others. We’re going to let the data tell us.”

The project’s main focus areas are health, education and savings, but Duckworth noted that we find ourselves in dozens of situations every day where “the thing that’s good for you and good for other people isn’t always the easiest thing and isn’t always the most fun thing to do in the moment. I think that’s what all of these problems have in common.”

The root of the problem isn’t a knowledge gap: Most of us know that we should eat more fruits and vegetables or that we need to start studying for an upcoming final. Rather, we fail to make connections between how every “eat this/not that” or “studying vs. Netflix” decision adds up cumulatively over time.

“We don’t know which ideas are actually going to be more effective than others. We’re going to let the data tell us.”–Angela Duckworth

Duckworth and Milkman noted that studies have shown that about 40% of premature deaths come as a result of behavior that could have been changed. “If we could get everyone to exercise regularly, quit smoking, drink responsibly, eat a healthy diet, get the recommended cancer screenings, we’d be able to wipe all sorts of deaths off the map and reduce medical costs dramatically,” Milkman said.

They don’t expect it to be an easy problem to solve. “It’s the holy grail; I won’t trivialize it,” Duckworth said. But both researchers say that they hope this approach will represent a significant step forward in coming up with solutions that are effective and easy to implement no matter what the situation or the financial resources a person or organization has available.

“What I don’t expect in 2018 is to solve the problem of enduring behavior change. It’s too hard,” Duckworth said. “I don’t expect it to happen in 2019. I do expect immediately to start learning. It’s a long, hard road ahead to unraveling the problem of human behavior change and figuring out why some people adopt good habits and then so many are failing right next to them. But I’m 100% confident that if we stick with it and see what the data has to tell us, we’ll make progress.”