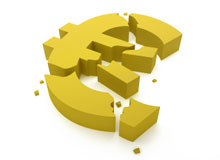 Amid the latest effort in Europe to ward off another systemic financial crisis, Greece looks more likely to drop out of the euro zone than ever, at least temporarily, says Franklin Allen, a Wharton finance professor.

At this week’s European summit, German Chancellor Angela Merkel said the European Union (EU) should be able take over control of Greece’s budget decisions if needed. One Greek newspaper referred to the German proposal as “the document of shame.”

“I think the Greeks are quite right to be outraged at this,” Allen says. “It underlines the real problem in the euro as currently constituted. I think Greece will leave the Euro, perhaps temporarily, and this will de facto become the discipline device.”

On the face of it, the overall risk of a financial system collapse in Europe appears to have been greatly reduced in recent weeks, thanks largely to two developments. First came the Long Term Refinancing Operation (LTRO), which makes $650 billion in new money available to euro zone banks over three years. That has significantly lowered the costs for credit insurance (credit default swaps) – and thus the overall cost of borrowing — for sovereign bond issues by Italy and Spain, at least for now.

The second development came this week with the signing of a new pact imposing stricter fiscal requirements on EU counties more generally. Of the 27 members, only the U.K. and the Czech Republic declined to sign the new treaty.

How much does this new agreement accomplish? “Obviously, Europe and the euro zone need a fiscal compact. But the problem is that it won’t be in place in just a few weeks,” notes Wharton management professor Mauro Guillen. “You need months to years to implement it. But investors and the markets want answers now, not in months or years. So I think it is the right path to eventually take, but it cannot solve the pressing problems of the day.”

Allen further points out that “it does not accomplish much in concrete terms at all. My understanding is that there will be enough ‘get outs’ that it essentially will not force countries to adjust immediately…. The Growth and Stability Pact did not work and this is more of the same.”

Regarding the new money available through the LTRO and the European Central Bank (ECB) in mid-December, Financial Times columnist Martin Wolf writes: “Does this mean the euro zone crisis is over? Absolutely not. The ECB has saved the euro zone from a heart attack. But its members face a long convalescence, made worse by the insistence that fiscal starvation is the right remedy for feeble patients.”

The bottom line, then, as Allen notes, may be Greece’s exit from the euro zone, and there have been some reports that those plans are underway.

This all comes against a challenging background. European unemployment is at its highest level since the euro was created, and the International Monetary Fund (IMF) recently lowered global economic growth estimates substantially, particularly for Europe, compared with forecasts of just three months ago. Many European countries are in recession already. The IMF forecasts a region-wide recession in 2012, with GDP falling by 0.5%, and far more sharply in Italy and Spain.

On balance, it’s a gloomy picture. But what if it’s all just part of a process of controlled chaos?

In the article “The coming resolution of the European crisis,” Fred Bergsten, director of the Peterson Institute for International Economics, and Jacob Funk, a research fellow there, disagree with the widely held view that “policy reactions to the Eurozone crisis are … short-sighted, incoherent, and driven by political expediency.” Instead, the two argue, “what we are seeing is a game of chicken among the key political and economic powers in Europe. As the crash looms ever closer, the right deals will be struck and Europe will emerge stronger and with its currency intact.”

The writers further note that the key to understanding many developments in the euro zone is to look at what “Europeans do rather than what they say. Germany and the ECB will come up with any amount of money needed to prevent a financial collapse of the region,” the article notes. “The problem for the markets is that these central players cannot say that this is what they will do.” Why? First, because committing to unlimited bailouts “would represent the ultimate in ‘political moral hazard’” and would take the pressure off debtor countries to make tough political decisions. Second, according to this view, the four key players — Germany, the ECB, the IMF and private lenders — have essentially been working individually “to impose as many of the financial losses on Greek government bonds or European banks as possible onto the other three.”

The writers further point out that none of the agreements under consideration – no matter how painful – come close to being as “costly for any of the main actors involved, inside or outside the Eurozone, as a sovereign default in Italy and/or collapse of the euro.” Therefore, the argument goes, “once the political pre-positioning is over and the alternatives are exhausted, the games of chicken will end and the political decision on how to split the bill for securing the euro’s survival will be taken.”

Still, as other analysts note, it is quite possible that markets could outrun the speed with which officials could respond to a swift-moving crisis, and the whole project could go off the rails.