Innovation Almost Bankrupted LEGO — Until It Rebuilt with a Better Blueprint 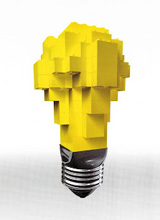 It was 2003, exactly 56 years after Ole Kirk Christiansen bought the first plastic injection molding machine in Denmark to start manufacturing plastic bricks for building-block toys. On the surface, or so it seemed, the LEGO Group had done everything right over that time period.

The company was an iconic name in the toy business — plastic building block toys were “LEGOs” in customers’ minds, just like all tissues were Kleenex and all flavored ice pops were Popsicles. LEGO was also rare among big companies in that the firm was still run by the founding family, with Christiansen’s grandson, Kirk, serving as CEO. While LEGO had always looked for new products, after a sales slump in 1993, the firm tripled its offerings, and in 2000 went on a binge of innovation, adding on LEGO-branded electronics, amusement parks, interactive video games, jewelry, education centers, and alliances with the Harry Potter franchise and the Star Wars movies.

Speaking at a recent conference on innovation at Wharton’s William and Phyllis Mack Center, Wharton practice professor of operations and information management David Robertson said Kirk Christiansen and his leadership team adhered to nearly every one of the major principles that are widely prescribed by experts in launching its spate of innovation in 2000: The firm found relatively competition-free markets where LEGO could dominate. Management sought the participation of a number of different constituencies from both inside and outside the firm and hired a diverse and creative staff. It tried to create new products that disrupted existing markets, and it listened to customer feedback. Innovation became a focus of every aspect of the company, with the goal of turning it into the world’s strongest brand among families by 2005.

In short, LEGO had created an innovative culture that seemingly would have been the envy of any firm. “LEGO followed all the advice of the experts,” said Robertson. “And yet it almost went bankrupt.” Robertson’s forthcoming book, Brick by Brick: How LEGO Reinvented Its Innovation System and Conquered the Toy Industry, was the basis for the seminar titled, “Learning From Failure in Innovation.” The LEGO story, according to Robertson, lies at the heart of why companies should not blindly follow the typical mantras of innovation. Management and evaluation must be at the heart of any innovation strategy, he noted, and although it is generally not good for a firm to remain stagnant, the reality is that unbridled innovation in the vein of LEGO may not be the answer, either.

The first half-century of LEGO’s history, however, is the tale of a successful post-World War II Scandinavian company. Ole Kirk Christiansen started making wooden toys in his town of Billund, Denmark, during the Depression of the 1930s, eventually naming his company LEGO, which loosely translated from Danish means “play well.”

When the war was over, Christiansen bought a plastic injection molding machine and experimented with it to see what kinds of toys he could make. By 1949, he had developed the now-familiar building blocks with circular studs on the top, an advancement that allowed children to lock connecting blocks into different shapes rather than just stacking wooden blocks on top of each other. Half of LEGO’s output was plastic by 1951. Later that decade, the company developed a more durable plastic polymer for manufacturing the toys and also trademarked the building-block style for which LEGO is still famous.

Over the next two decades, LEGO’s sales and profits grew steadily but modestly as the firm focused primarily on its trademark building sets with just a few variations, including castle and space themed toys. Beginning in 1978, however, the popularity of LEGOs surged, and profits doubled every five years during the 1980s. LEGO’s rise came during the peak years of the baby boom and that generation’s children. The firm’s building-block materials continued to appeal to those groups for years, as the company turned out more and more themed building sets and expanded its markets.

In 1993, however, sales slowed to a crawl. The Chinese had started manufacturing similar items at a fraction of the cost. LEGO added more toys to its product line, but did not sell more items overall, thus inflating manufacturing and delivery costs while not increasing revenues. At the same time, consolidation among some retailers and the phenomenon of big-box stores made it tougher for company leadership to negotiate prime shelf space for LEGOs. Further, with the advent of video and computer games, boys — and it was primarily a “boy toy” company — began giving up LEGOs in favor of more sophisticated toys at an earlier age, reducing the company’s potential market. “Kids were getting older younger,” Robertson noted.

These challenges precipitated the firm’s 2000 innovation binge. Many of the new items received positive reviews within the industry and from customers, particularly the Star Wars and Harry Potter-themed products. “They were successful — until they weren’t,” Robertson stated, noting that the Star Wars and Harry Potter-centric toys, for instance, were blockbusters — but only in the years when new movies or books in those series were released. Other toys either failed to gain traction or were only popular within small niche markets.

By 2003, the company was virtually out of cash. It lost $300 million that year, and the projected loss for the next year was up to $400 million. “Basically, LEGO had strapped on wings and was flying at 30,000 feet,” Robertson noted. But the company had not asked or answered the questions needed to financially sustain such growth — questions such as, “Where do you want to go?”, “Where are you now?” and “How will you get there?” “If you are going to accelerate innovation, you need to know which way you are going,” Robertson said.

To get the firm back on track, Kirk Christiansen turned to a report from management consultant Jorgen Vig Knudstorp, which showed that LEGO needed to better organize and control its cutting-edge ambitions. Christiansen ultimately stepped aside, becoming chairman and letting Knudstorp take the role of CEO. To generate cash for its next phase, the company sold a 70% stake in its successful Legoland theme parks for $460 million to the Blackstone Group and closed the firm’s Danish headquarters building, moving management into a nearby factory. It then outsourced the overwhelming majority of its plastic brick production to cheaper facilities in Mexico and the Czech Republic.

The new regime at LEGO, however, did not just throw over innovation, said Robertson. Instead, it created a more organized structure for those efforts. Management gave everyone from the sales force to the headquarters staff the capability to create and suggest new avenues for growth. But their ideas were put to the test: Any innovation had to prove to be consistent with the company goal of LEGO being recognized as the best company for family products.

For instance, experts generally suggest that innovation should move toward “blue oceans,” that is, markets where the product will be unique. But as Robertson noted, “red oceans” — meaning that blood could be in the waters from competitive sharks — exist for a reason. “People are competing in red oceans because there is something there [worth going] after.” The company sought to compete with LEGO-like toys in three dimensions and on video. It opened retail stores and created LEGO-themed board games and straight-to-DVD films.

While the company may no longer be flying loop-the-loops at 30,000 feet, it is no longer susceptible of crashing and is cruising along again as one of the more successful toy companies, according to Robertson. By managing its innovative tendencies, over the last three years, LEGO’s sales have gone up an average of 24% annually and profits have grown 41%, he added. The company now has about 10,000 employees, and is the world’s third largest manufacturer of play materials. LEGO products can be found in more than 130 countries.

LEGO may not regularly make lists of the most innovative companies, but it is moving forward at a time when competitors such as Hasbro and Mattel are stagnating, Robertson noted. “Controlled innovation has clearly worked. That is the lesson learned at LEGO — just in time.”

Innovation Almost Bankrupted LEGO — Until It Rebuilt with a Better Blueprint. Knowledge@Wharton (2012, July 18). Retrieved from https://knowledge.wharton.upenn.edu/article/innovation-almost-bankrupted-lego-until-it-rebuilt-with-a-better-blueprint/

I’m so glad they survived! But I do remember the times there was a lot on the shelves. A lot of us AFOL LEGO Builders do miss the days when LEGO had a good range of small to large builds for lines like the town/city stuff. And we all have our fingers crossed for them to bring back the train line properly! they have a bright future – and so do the generations that get to enjoy LEGO Play!