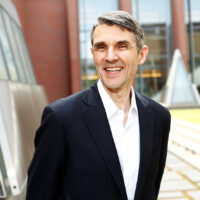 Bank regulators in the U.S. have steadfastly guided the transition to SOFR (Secured Overnight Financing Rate) as a superior alternative to the scandal-tarred LIBOR, or the London Interbank Offered Rate. LIBOR, which banks had used since 1986, was phased out on December 31, 2021. SOFR is considered a more accurate and risk-free benchmark rate compared to LIBOR for banks to price loans, mortgages, and other types of debt.

But SOFR may not be the golden alternative it is touted to be. In times of crises such as recessions, SOFR doesn’t offer banks the cushion they got from LIBOR to price in the additional risk they take on, according to new research by Urban Jermann, Wharton professor of finance.

In a paper titled “Interest Received by Banks during the Financial Crisis: LIBOR vs Hypothetical SOFR Loans,” he showed that during the 2008 financial crisis, LIBOR allowed banks to receive additional interest of up to $30 billion on loans of about $2 trillion that they would not have received under SOFR. His study covered the period between July 2007 and June 2009.

Essentially, Jermann estimated how much the credit sensitivity of LIBOR helped lenders during the financial crisis. “The $30 billion in interest income due to the credit sensitivity of LIBOR is not a trivial amount,” the paper noted, putting that in perspective: On March 6, 2009, when bank share prices tanked, the top 20 commercial banks from 2007 had a combined market capitalization of $204 billion. “This additional income hedged banks’ increased funding costs and more generally provided support in a time of large losses,” Jermann wrote.

“When there is a crisis, the interest rate on LIBOR loans increases, but not with SOFR.” — Urban Jermann

The risk premium on LIBOR loans acts like an insurance for banks, Jermann said. During the financial crisis, banks were prone to risks and some banks failed, which explained the risk premium for banks’ unsecured borrowing. “In normal times, LIBOR loans are a little cheaper [than if they were based on SOFR],” said Jermann. “But then when there is a crisis, the interest rate on LIBOR loans increases, but not with SOFR. In fact, SOFR stays low, and it can even go down.”

At the onset of the COVID-19 pandemic in March 2020, LIBOR increased relative to SOFR for about a month, and banks received higher interest income (of about one percentage point) than they would have under SOFR to compensate for the increase in their cost of funds. That was the “insurance” LIBOR provided banks, Jermann explained.

Bank lending is asymmetrical in that firms with lines of credit from their banks have their credit spread locked in even if their credit quality goes bad. Many bank loans are credit lines where the credit spread and the terms are determined up front, said Jermann. “If the credit quality of a business goes down, the bank still has to continue lending money. On the other hand, if a firm’s credit quality improves, they can just go to another bank for a cheaper loan. So it’s asymmetric. SOFR exacerbates this asymmetry because it is not sensitive to credit risk. With LIBOR, at least, borrowing firms had to pay more if market-wide credit risk increases.”

The Case for SOFR

Jermann acknowledged that SOFR is superior to LIBOR in that it has a robust base of transactions (about $1 trillion daily, according to the New York Federal Reserve), and it is not vulnerable to the types of manipulation that preceded LIBOR’s downfall. SOFR is based on “a very liquid market,” he added. “SOFR has a robust market, and it doesn’t really change much during crisis situations.”

Jermann also pointed out that SOFR does not have to provide risk insurance because loans based on it are collateralized by government debt. “SOFR is crisis-proof,” he said. “In a crisis, government debt is the safe asset.” LIBOR, on the other hand, is based on unsecured lending “where you sort of trust it,” he added.

Regulators have pointed to more fundamental reasons for preferring SOFR as the reference rate. “SOFR is a much more resilient rate than LIBOR because of how it is produced and the depth and liquidity of the markets that underlie it,” the New York Fed said in a note. “As an overnight secured rate, SOFR better reflects the way financial institutions fund themselves today.”

LIBOR’s days are numbered for other reasons, too. Banks do not need LIBOR as much as they did in earlier times because they no longer need the short-term borrowing it supported. In earlier times, banks borrowed from each other to fulfill regulatory requirements to maintain a minimum amount as reserves. “The monetary policy has changed, and now banks have excess reserves,” Jermann said. “They don’t need to lend and borrow with each other in the inter-bank market.” The Federal Reserve reduced reserve requirement ratios for banks to zero in March 2020 as the pandemic’s first wave raged.

“We don’t necessarily need only one [benchmark interest] rate. We could have multiple rates.” — Urban Jermann

While LIBOR is no longer an option, Jermann said SOFR shouldn’t be made the sole alternative for the financial markets. “While SOFR is not optimal for bank lending, it works pretty well if you want one single rate,” he said. “But we don’t necessarily need only one rate. We could have multiple rates.”

For instance, SOFR could be used for most derivatives transactions or interest rate swaps, but smaller bank loans could use alternatives like the Bloomberg Short-Term Bank Yield Index (BSBY), which offers LIBOR-like credit sensitivity. “Regulators, [however], have been critical of BSBY believing that it would share LIBOR’s lack of robustness,” the paper noted. “Banks wanted to use BSBY, but regulators discouraged them,” said Jermann. Other credit-sensitive alternatives are AMERIBOR, a benchmark rate the American Financial Exchange has created, or AXI (cross-the-Curve Credit Spread Index), which has been designed as an add-on to SOFR by professors at Stanford University and the Australian National University.

Under SOFR, small and midsized banks will be especially disadvantaged, Jermann said. In a letter to the Federal Reserve and other regulators, a group of 10 banks had asked for the ability to use alternatives to SOFR. “We object … to the use of SOFR as ‘the one alternative’ index,” they had said. “A one-size-fits-all approach may not be the most appropriate.” Senator Pat Toomey (R-Pa.) expressed similar sentiments in a Congressional testimony last year.