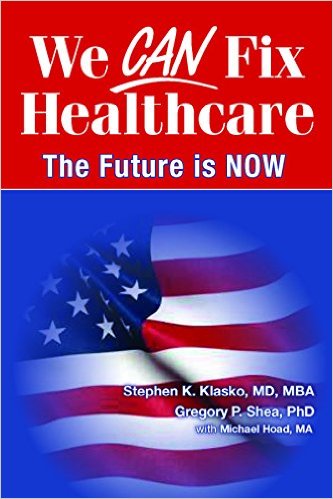 Steve Klasko, president of Thomas Jefferson University and CEO of Jefferson Health, is the author of  We Can Fix Healthcare: The Future Is Now, with Wharton adjunct professor Gregory P. Shea and Michael Hoad. In the book, the authors propose 12 disruptive transformations to the health care industry.

Klasko stopped by the Knowledge at Wharton Show on Sirius XM channel 111 with Nishad Rahman, a medical student at Jefferson, to talk about this changing industry.

Knowledge at Wharton:  How are the changes in health care changing what students like Nishad are learning in medical school?

Nishad Rahman: There are a lot of different changes just at Jefferson alone. I’ll give you a couple of examples. We have something called the College within the College program. We have three of them so far: one is design, one is population health, the other is research. This is basically a degree within getting the overall medical degree where you specialize. For example, if you’re in design, you’re learning about workspaces and how to better design workflow and improve outcomes through the space that you have.

I’m in the population health track, which basically says we need to make sure that when we’re talking about health we’re seeing it as a larger system in which we can improve health in communities. By improving overall health rather than fixing medical problems in late stages, we can improve the level of health and reduce costs. They don’t have to be mutually exclusive.

I just met with somebody today that’s in the hospitality industry. I said, “What if you actually take over all the non-medical pieces of my hospital and health system?” When you think about that, why hasn’t that happened before? Why should you have lousy food and pay a lot for it? … If you’re in a hospital for a week and you’re getting IV antibiotics, the expertise of the doctors, the caring of the nurses, that’s on me. But everything else is hospitality. Why do we accept that? Well, we shouldn’t.

“If you’re in a hospital for a week and you’re getting IV antibiotics, the expertise of the doctors, the caring of the nurses, that’s on me. But everything else is hospitality…. As a hospital CEO, … I’m going to go and bring in hospitality folks to do it.”–Stephen Klasko

As a hospital CEO, health system CEO, I’m going to go and bring in hospitality folks to do it. I’m going to start a degree in health care hospitality because I think that’s going to be a major new opportunity.

Knowledge at Wharton: One of the things we’ve talked with Steve about before is the loss of connection with the consumer, with the patient. Nishad, as you’re going through medical school right now, that has to be one of the most important things that you’re dealing with.

Rahman: For sure. And in fact it’s often more important. To [paraphase] a great doctor, [William] Osler, it’s more important to know what type of patient has the disease than what type of disease a patient has. In terms of that in applying that, we have to make sure that we build relationships with our patients instead of just prescribing drugs or telling them, “Get IV this or that.”

Klasko: Nishad’s going to go through a medical school where telehealth is just part of what we do as opposed to other places, “Oh, this telehealth stuff, that’s really bad. That’s not academic medicine.” He’s going to leave here looking at technologies that are happening in the consumer industry and just assume that that’s what should happen in the health care industry. When he gets to his residency, and it’s not getting done he’s going to say, “Why do you still do things the old way?”

Rahman: Especially as a millennial, it’s absurd that we haven’t been doing it already in many cases. If you ask the students, we’re young enough to realize that everyone else is doing it. It’s not like Skype is new. It’s not like Google Talk is new.

Knowledge at Wharton: From what I understand about being a resident, you’re there to work and work a lot, and your voice is heard a little bit, but maybe not as much as it probably should be.

Let me give an example. I got to be a little bit of an undercover boss. I ended up in our hospital for a night. I have three children, and they were concerned about me. We have something called virtual rounds where we actually can have two-way electronic communication with our doctor or with a patient when he’s making rounds, with my son in New York, my daughter in Tampa and my other daughter in Buffalo.

“Here’s a fact, not a prediction: 80% of what doctors do will be replaced by an IBM Watson type of thing.”–Stephen Klasko

At Jefferson, we’ve actually created a completely student run group, Physician Executive Leadership, that’s student-founded, student-led, student-driven. We have our own website. We’re autonomous. We’re connected to Jefferson, but our eventual goal is to go nationwide. The idea is to build the next generation of physician executive leaders. We do that by building the skills that we need.

For example, there are a lot of things we learn in medical school. We learn tons of stuff about microbiology, about physiology, anatomy. We don’t learn much about the influence, about business at all, about health care policy, about the future of health care. Especially as technology advances, many of the things that we have always been accustomed to having to do — like memorize organic chemistry formulas, memorize the Krebs cycle — will be done for us through technology. That’s not something we should fear. That should be something that shapes the role of physicians in the future.

Knowledge at Wharton: How much of what you’re doing right now is the medical end of it and how much of it is the business end of it?

Rahman: We have one course that’s almost entirely dedicated to empathy and the actual clinical aspects. It’s called ICM, and it’s the intro to clinical medicine. So it’s the skills like empathy, like talking to patients, like communication. We also have a couple of different groups outside the school. For example, the Physician Executive Leadership program I was telling you about are building more of those business side things.

We enjoy that fact that we’re not directly under the school because that gives us the freedom to actually build a curriculum that students want. We send out surveys. We figure out the key skills that people need to know according to what they see changing in the world around them, and we build our curriculum to have that. So we have CEOs, business leaders, CMS people, entrepreneurs, all of those people coming in and telling us about what they’ve learned.

“Your psychiatrist does not need to memorize the Krebs cycle or biochemistry formulas. We’re going to go back to choosing people based on their ability to communicate and heal.”–Stephen Klasko

Knowledge at Wharton: The good news is that there is that level of understanding. Obviously the medical part of it always is going to be important. But understanding the business and how business can affect health care in the future, having that understanding ends up being a huge driving force, part of what you’re talking about in the book.

Klasko: Here’s a fact, not a prediction: 80% percent of what doctors do will be replaced by an IBM Watson type of thing. Just think about that.

Knowledge at Wharton: By when?

Klasko: Two years from now. Here’s why. There’s no human brain on the planet that can memorize everybody’s genomic sequence. So this whole thing of choosing people like Nishad, just based on the fact that they can memorize the Krebs cycle is ridiculous….

When you think about it, the role of the doctor is going to be around communication. It’s going to be about observation versus seeing. At the end of the day, we can’t continue to select and educate docs the same way that we have for the last 50 years….

Knowledge at Wharton: How do you see the job of being a doctor changing in the next decade?

Klasko: The fact of the matter is from an empathetic doctor that would go and take care of homeless people for free and then go do left ventricular neurosurgery to [the television show about the character Gregory] House, a drug addicted, very analytic person, but not a very good communicator, we’re going to go back. At the end of the day, your psychiatrist does not need to memorize the Krebs cycle or biochemistry formulas. We’re going to go back to choosing people based on their ability to communicate and heal.

Rahman:  To expand on that, if you have a highly intelligent person that’s gifted in the sciences but has no empathy, that’s the type of people that we can be accepted into medical school right now because the categories or MCAT scores or organic chemistry scores, and empathy is not part of that selection process at all. Instead we should be thinking about taking intelligent empathetic people and teaching them the science that they need.

There are very [few] cases — almost none — where you need to know organic chemistry to be an effective doctor. I can’t imagine a case that’s true unless you’re in research. So the idea that that’s the category that we’re using to select people is absurd.

Klasko: The revolution is going to come from the millennials. [With] a millennial, it’s technology over loyalty. I’m working with a company that’s doing a Match.com for obstetricians. Normally what happens, I’m pregnant, your family doc says, “Oh, I’m going to send you to this obstetrician.”

What the millennials are saying is, “Wait a second, I have about eight or nine things I want, including how much my deductible is going to be. That might be who you play golf with or who is in your system. You give me four names.” So this Match.com, a patient will go on it; almost like Progressive Insurance, they’ll compete for your business. The patient will say, “These are the ten things I want. What obstetricians want to compete for my business?” We’ll answer those questions.

Now an obstetrician is saying, “Well, that’s not why I went into medical care.” That’s fine. Then they won’t get that patient.

Rahman: Absolutely. We have to keep in mind that it’s not just going to be the millennial doctors who are acknowledging the change. It’s going to have to be the millennial consumers, the millennial people who are sick who are demanding more from their health care. For a very long time we’ve just considered health care to be this pinnacle where everything is the way it is because that’s the best we can make it and when consumers haven’t demanded the things that we know we can accomplish. Once they start doing that, where it’s going to be increased competition, we’re going to figure out how good we can make it.