Top teams work best — and fastest — when they are based on the right criteria and include a highly diverse group of people from all levels across an organization, including outside stakeholders, write David Komlos and David Benjamin in this opinion piece. They are co-authors of Cracking Complexity: The Breakthrough Formula for Solving Just About Anything Fast. Komlos is the CEO and Benjamin is the chief architect of Syntegrity.

Leaders have been hearing for years that diverse teams are key to tackling big problems, to innovating better, and to overall performance. In practice, few leaders know how to configure teams with the specific diversity of talent required to resolve their top challenges; they aren’t clear on what qualifies as diverse in terms of “who” and “how many,” nor how to construct these teams. This is essential to mastering complexity. Let us explain.

Imagine walking into your office one morning and finding a ferocious lion on your desk. If you are like most people, in the blink of an eye you slam the door and run away as fast as you can. Deconstruct that blink of an eye — in less than a second you saw the lion, absorbed the implications, thought about your options, decided what to do, and implemented seamlessly. No confusion, no mixed messages, no consensus-building — just a very smooth path from sensing the lion to fleeing.

Organizations, business units, teams, joint ventures don’t work nearly as fast. Their challenges, like growing faster, taking out cost, merging, digitizing and transforming aren’t solved by any one individual, nor are the solutions executed by any one individual. It takes many people to sense, absorb, think, decide and then act in a unified way.

W. Ross Ashby, president of the Society for General Systems Research from 1962–1964, understood this. His Law of Requisite Variety states “Only variety can destroy variety,” which means that leaders who are faced with a multidimensional challenge must be as multidimensional as the challenge. That’s only possible by tapping into a much broader and deeper variety of people — beyond the usual suspects — who have the combined knowledge, experience and expertise to match the complexity, and whose buy-in is essential for execution. Short-changing requisite variety guarantees partial outcomes; starting with a partial understanding, followed by partial solutions, followed by weak execution. 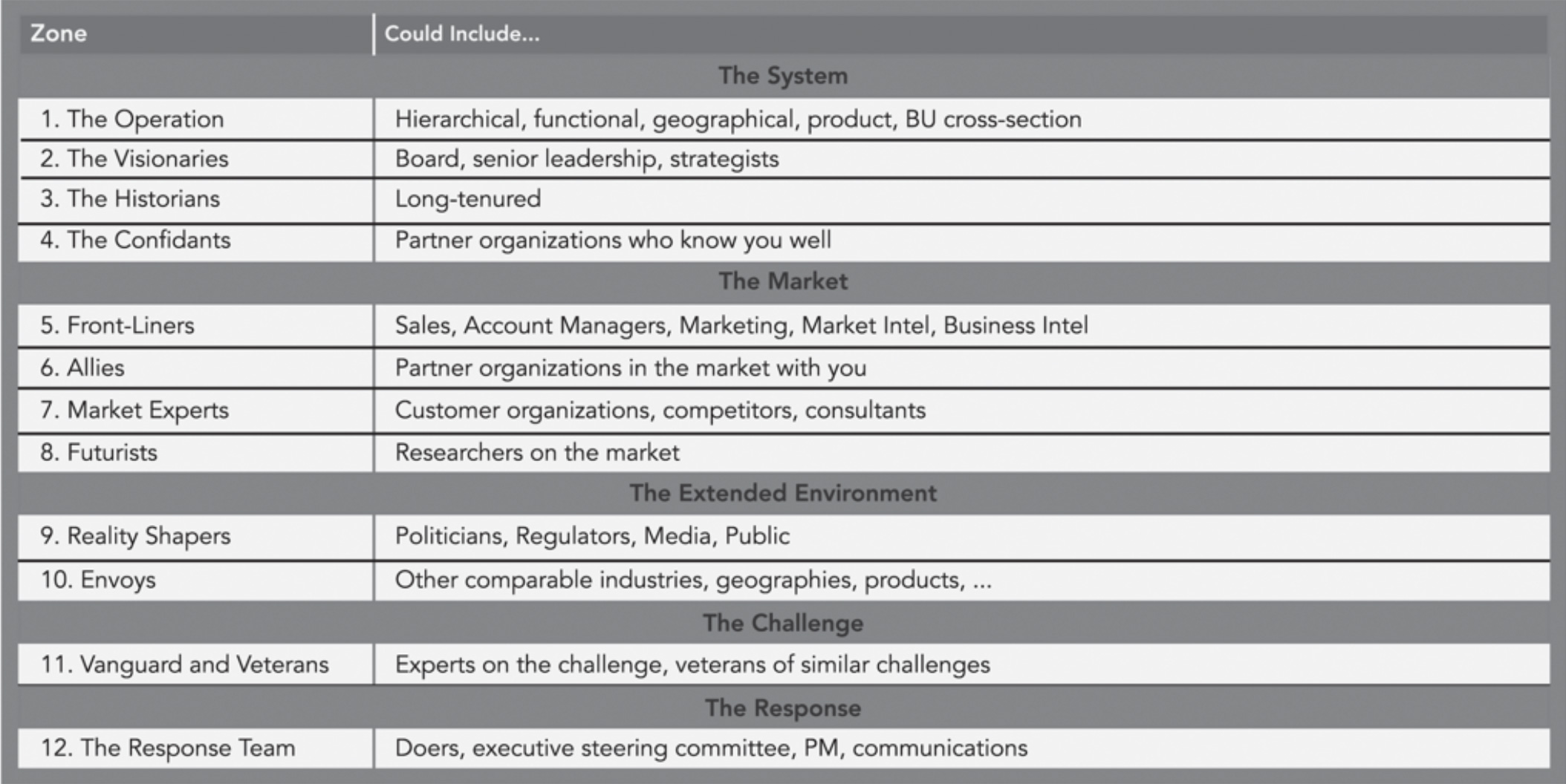 The 12 Zones of Variety

Depending on the challenge — for example, improving Net Promoter Score (NPS), transforming manufacturing and supply chain, or securing customer trust and loyalty — start by taking a broad view of the organization, including its customers, stakeholders and partners. Think through each zone to identify the people you need to involve, and then layer in other considerations and characteristics. For example, if you’re choosing among the leadership team, who’s most open to change and willing to be challenged? If you’re choosing from the IT department, who’s going to be the most important doer and who’s the biggest skeptic? Among your agency partners and vendors, who always seems to listen first and come with great insights later? Strength lies in engaging those differences, all together, all at once.

Achieving the necessary variety with a minimal number of people is the trick. When it comes to the “requisite” word, it’s all about efficiency in your selections. Once you’ve listed specific names of people who collectively cover the desired zones and cross-checked the characteristics that are covered by those people, you’ve got a long list of candidates. Prune that list, remove the duplicates, replace three people who cover a few zones and characteristics with one who covers them all, and now you’ve got your high-variety team. Maybe as few as eight people, perhaps as many as 50 or 60.

A large financial services firm was intent on greatly improving its NPS. They started down the path of their usual practice of involving mostly senior leaders and their reports, augmented by a few younger high-potential staff members. After using the 12 Zones and the idea of requisite variety to rethink the team they’d be convening to find solutions, they made room for strong representation from the field, a hierarchically diverse cross-section of key functions, several external experts, their PMO outsource partner, several customers, and their internal task force responsible for stewarding execution of the plan. As they thought through other key characteristics to bring into the group, they chose a couple of additional insiders who had dealt with a similar challenge but in other industries, switched some of the leaders they had first identified to get more demographic diversity, varied the mix of customers to be more reflective of key segments, and added one more field person with a reputation for being a real challenger.

Within six months, this carefully chosen combination of usual and non-usual suspects was credited with the firm’s NPS Score improvement from -15 to +28.

A conglomerate was able to transform its manufacturing and supply chain much faster than expected in large part because they involved many individuals who typically would not be engaged in figuring this out. All lines of business were represented as were several key functions. Also included were a few supply chain partners, customers, outside experts in supply chain transformation and data and analytics, and layers deep inside a geographically diverse set of plants and distribution centers. In choosing who to bring from the lines of business, intentional choices were made to ensure a mix of strong supporters for change and the biggest resisters. All of the “unusual suspects” commended leadership for having them involved in such an important discussion so early on, for the first time in their careers.

“Achieving the necessary variety with a minimal number of people is the trick.”

A health care organization that supplies life-essential products was able to elevate trust and reputation, and achieve market share dominance by deliberately involving external stakeholders with polar opposite views and motivations throughout its strategic planning cycles. These people, who were used to being involved through stakeholder-engagement meetings and market research interviews, found themselves instead in the center of strategy development, expressing their needs, voicing their concerns, and ultimately co-creating the way forward. With them at the table was a cross-section of the organization’s people, given full right to be outspoken, to challenge, to be vulnerable about what they felt could and could not be done, and to be open to the possibility that current internal processes and policies were wrong. In fact, in one particular strategy, the entire group realized existing national policy was wrong and aligned and took ownership of changing it. Most of those involved remarked on how they had not seen that coming, and that the need for change wouldn’t have been identified at all without the variety of people in the room that day.

In each of these instances, bringing requisite variety to bear was a key difference-maker in the quality of solutions and subsequent speed of execution. Of course, configuring and assembling requisite variety is necessary but insufficient. What you do when you bring them all together in the same place determines whether or not the team will successfully come up with a robust solution and truly buy-in to what they have co-created.

Complexity is the defining challenge of our times. The capability to leap past your biggest challenges and to seize the opportunity on the other side of those challenges is the single most important leadership and organizational capability today. The talent to do so isn’t scarce; it’s abundant and all around you. These people are relatively inexpensive, they’re part of the solution, and when mobilized in the right way, they’re extremely fast. Having a requisite-variety mindset and mastery in configuring special-purpose teams is the gateway.