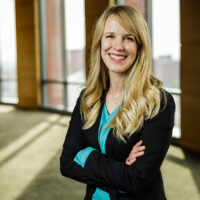 Wharton’s Britta Glennon talks with Wharton Business Daily on SiriusXM about what the reversal of Trump’s work visa ban means for the U.S. economy.

The Biden administration recently allowed a Trump-era ban on certain work visas to expire, opening the door for foreign workers to reenter the American labor pool after being locked out for nearly a year.

The controversial ban, which President Donald Trump said was necessary to protect public health and the economy during the coronavirus pandemic, included H-1B visas for highly skilled technical workers and H-2B visas for seasonal workers in the hospitality industry. Also banned were visas for the spouses of H-1B workers, visas for executives on company transfers, and visas for researchers, scholars, and those in other specialized jobs such as au pairs.

Wharton management professor Britta Glennon praised the current administration’s decision, saying it will have a positive net effect on the economy. Numerous studies, including several from Wharton researchers, show that immigrants boost economic activity through innovation, job creation, and consumption.

“I view this as a broadly positive move for the U.S. economy, and I think it will help our recovery process,” Glennon said during an interview with Wharton Business Daily on SiriusXM. (Listen to the podcast at the top of this page.). “A lot of firms really rely on these immigrants and have struggled to find the workforce that they need while this ban was in place.”

It’s difficult to analyze the impact that the ban had on companies because the data is not yet available. But Glennon said previous data, her own research, and anecdotal evidence suggest that high-tech firms will outsource or “offshore” work when they can’t find enough specialized employees to fill positions.

“That’s something we’ve seen in the past. I see no reason not to expect this to have been the case this most recent time, particularly in the age of ‘work from anywhere,’” she said.

Companies with jobs for low-skill workers on seasonal visas likely were not hit as hard by worker shortages in the past year because of the pandemic, she said. Many restaurants, bars, hotels, and other hospitality establishments across the country were shut down or operated at reduced capacity during the worst of the outbreak.

Immigrants and the Jobs Debate

The contentious debate over immigrants and jobs goes back decades, with opponents arguing that immigrants take away jobs from Americans who need them and drive down wages. Trump invoked that reasoning last June when he signed the executive order to establish the ban, which expired March 31. His administration estimated the ban would prevent foreign workers from filling 525,000 jobs, according to The Washington Post.

“Without intervention, the United States faces a potentially protracted economic recovery with persistently high unemployment if labor supply outpaces labor demand,” Trump wrote, adding that “American workers compete against foreign nationals for jobs in every sector of our economy.”

But Glennon said there’s been no empirical evidence to show that restrictions on foreign workers create more jobs for Americans.

“It’s basically not thinking about supply and demand correctly,” she said. “When more immigrants come in, they’re not just passive actors in the economy. They’re buying things. They’re consuming. They’re creating jobs, etc. That’s the fundamental reason why we don’t see them replacing jobs because they’re actually creating more when they come.”

“Many of these visas are explicitly designed to try and fill gaps in niche parts of the economy, in areas where there aren’t really enough Americans.”

While overall unemployment is relatively high, it’s quite low in the tech sector. That makes it harder for high-tech companies to find enough specialized knowledge workers. Immigrants on H-1B visas help meet that demand, Glennon said. And H-2B visas help businesses fill temporary, seasonal jobs that may be unappealing for Americans looking for full-time work.

“I think people often use the broader unemployment rate to argue that we don’t need immigrants, that those jobs should go to Americans,” she said. “But, in fact, many of these visas are explicitly designed to try and fill gaps in niche parts of the economy, in areas where there aren’t really enough Americans.”

Biden in January unveiled his U.S. Citizenship Act of 2021 to overhaul the immigration system, including providing protections for dependents of H-1B visa holders. But it’s unclear whether he plans to expand the number of foreign worker visas that are granted each year. Both the Citizenship Act and any adjustment of visa caps would require authorization from Congress.

“The H-1B program is the obvious one here. There was already far more demand than supply,” Glennon said.