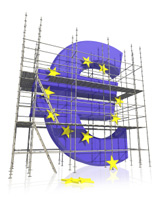 A strong wave of investments has flowed into Europe over the last couple of months, offering some observers hope that it’s a precursor of a sustained economic recovery and an end to the long-standing euro crisis. On the surface, it appears to be good news, particularly given that the eurozone recently slipped back into recession. But despite the injection of more than $135 billion in private investment towards the end of 2012, the latest economic indicators offer more cause for pessimism than optimism.

The split between what financial markets and the economic fundamentals are telegraphing about the future is confusing many observers. On the financial side, equity and bond markets, buttressed by the moves of the European Central Bank (ECB) in the fall to support government debt markets, have seen two very positive developments. One development is falling government bond interest rates, which is key because that makes it easier for some of the more desperately strapped governments to finance their large debts. The second development is rising equity markets. That suggests some companies may become more optimistic and could start to hire new workers in countries that have devastating unemployment rates.

As for why the stock markets are doing so well while real economies are doing so badly: “I think that quantitative easing is a big part of the explanation,” says Wharton finance professor Franklin Allen. “[Central banks] are buying up huge amounts of debt securities globally, and at least part of the money is going into equities and driving their prices up.”

Wharton management professor Mauro Guillen notes that bond markets have improved significantly in the eurozone because Spain and Italy have had de facto bailouts. “A bailout is needed if there is a problem with selling government bonds at an affordable interest rate. From this point of view, the ECB’s action in the summer to support the euro at all costs has made a difference. The risk premiums have come down – the ECB has been buying Italian and Spanish debt. So, in a way, they have already been rescuing Italy and Spain without going through a formal bailout.”

Last July, Mario Draghi, the ECB president, said his institution would do “whatever it takes” to avoid countries leaving the eurozone. Some countries wanted to exit in order to be able to create their own home currency, which they could then devalue to spark exports and get out from under crushing debt. The bank said it would ensure with financial underwriting that Italy and Spain could issue as much new debt as needed in order to finance the strict deficit-reduction programs now underway.

Ordinarily, the positive developments seen recently in financial markets might be viewed as leading indicators pointing to better days ahead. But these are not ordinary times. The problem is that these developments come against a worsening economic performance and not a stabilizing outlook. The best recent example is Italy, which takes on outsized importance given that it is probably too big for the eurozone to bail out if that were required, particularly after the huge bailout measures directed at Greece, Portugal, Spain and Ireland. Here are some notable recent economic indicators for Italy:

For Spain, Europe’s fourth-largest economy, the story is similarly grim. Unemployment hit a new record at 26%, and youth unemployment — which is decimating an entire generation of workers’ chances at securing good careers — is now above 55%. Industrial production slumped 1.8% in the final quarter of 2012 from the same 2011 period. The economic contraction in Spain (as in Italy) is a direct result of strict austerity policies. The Spanish government is slashing government spending in order to reach eurozone-imposed, deficit-reduction goals. Spain’s budget deficit ratio, which was 9.4% of GDP in 2011, dropped to 6.3% in 2012, and the aim is to hit 4.5% this year and 2.8% in 2014.

The data for Spain and Italy highlight the problems. “The financial markets are signaling a bright outlook, but the reality in terms of growth currently is far from that,” says Allen. Eurozone growth forecasts call for recession for the next six months to a year, then a switch over to growth. “The problem is that these growth forecasts have been drastically wrong. Greece is the classic example. When they started with the bailout program, the projections were that there would be a similar trajectory. That, of course, is not what happened, and we have had five years of contraction.”

Italy could “well get into a downward spiral like Greece,” Allen says. The ECB’s Fiscal Compact Treaty, as in the case with Spain, will be a long-term drag on growth because it requires Italy to slash its debt by more than 3% of GDP for many years. As the country’s economy and thus revenues shrink, it then has to cut even more, “and this will be problematic. The recent problems and the bailout of Monte di Pascua di Siena [an Italian bank] illustrate there are a lot pitfalls along the way as the economy starts shrinking. Italy hasn’t grown significantly for a long time. It’s not clear what policies will create growth.”

The austerity policies being vigorously pursued in much of the eurozone increasingly are being questioned, including by the International Monetary Fund (IMF), which recently acknowledged in this Working Paper, titled “Growth Forecast Errors and Fiscal Multipliers,” that too much austerity can damage GDP growth during a debt-deflation recession such as we have now by a factor of two or three times more than previously thought.

This is a huge concession and suggests that the current approach of using austerity for debt reduction may be self-defeating. In its most recent update of its World Economic Outlook, released January 23, the IMF forecast that while the world economy overall was likely to grow by about 2% this year, the “euro area continues to pose a large downside risk to the global outlook,” as does “excessive near-term fiscal consolidation in the United States.”

Guillen agrees that austerity policies have outlived their usefulness. “Germany seems fixated on this idea [of austerity]. They are balancing their own budget, although the markets are not demanding that. In the periphery, austerity means a prolonged recession and high unemployment for a longer period of time. I’ve said many times there is a middle-of-the-road solution that doesn’t negate the need for fiscal rebalancing while avoiding a long slump.” Germany should raise wages, which would stimulate troubled euro economies; the ECB should raise its inflation target, which would help to alleviate debt burdens more generally; and the surplus economies should engage in fiscal stimulus.

Italy’s current economic indicators, which help clarify what is happening in the eurozone more generally, are “very worrying,” says Allen. “It’s not clear they are on a sustainable path. They may well follow Greece. If that happens … the EU can’t bail them out.” So while it is possible that the ECB “may start monetizing the debt, this will require a large increase in their balance sheet. Not only will they effectively need to finance the Italian government but also the Italian banks. The other options will be to default or to leave the eurozone or both. None of these outcomes is good. ”

Many observers now think the ECB ultimately will weaken the euro considerably in order to stimulate the economy, Allen says. But such measures involve big risks. “We don’t know the possible long-term effects of these kinds of policies. My own view is still that the eurozone needs an exit mechanism for extreme problems. They avoided setting it up with Greece because they could fudge the numbers. But this was a mistake because if Italy has to leave, there will probably be significant contagion.”

If it is true, as more and more observers believe, that austerity now is causing more problems in Europe than it is solving, why can’t Europe’s leaders see that?

Politics and pride are preventing a clear view, says Allen. “The systems they have put in place haven’t worked, and they don’t want to admit this. They may muddle through. But the human cost is tremendous. Unemployment will probably go up significantly in Italy going forward. It is already unacceptably high in Spain and Greece, particularly youth unemployment.”

These societies are already undergoing tremendous social unrest under today’s stark economic conditions. How long can Europe go before there is a major political or economic breakdown, something far worse than we’ve observed so far? “We will see how much people will take,” Allen says. “The extreme parties are losing votes at the moment. But if growth doesn’t happen soon, this could change quickly.”