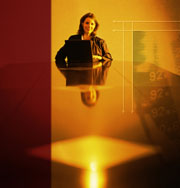 Deirdre Woods, former associate dean and chief information officer at Wharton, made a point during her years as a senior manager of encouraging other women to advance in their professional careers. One thing has always surprised her, however.

Women who are offered promotions “generally feel they need to know 80% to 90% of their current job before they feel ready to step up into a new role,” she says. But if you are smart and knowledgeable, “probably somewhere closer to 40% to 50%” is all that you need.

Men, on the other hand, feel no such constraints. “Men will start thinking about their next promotion right after they start their new promotion,” says Woods, who is currently interim executive director of the University of Pennsylvania’s open learning initiative and has started her own consulting company. “I’m not sure if men are necessarily more ambitious, but they are much more overt about having a plan and moving forward.” She remembers attending a conference where another woman made the same point, in a different context: In government, the speaker said, “a six-term congresswoman doesn’t feel she is ready for the Senate yet, whereas a first-term congressman does.”

It’s not just a phenomenon in the non-profit sector, according to a report last May in the Wall Street Journal titled “The XX Factor: What’s Holding Women Back?” The article quoted an executive at Google saying that the company “must invest extra effort to persuade women engineers to nominate themselves for promotions…. Men jump at the chance, often before they are ready, and are often turned down.”

But women, the executive noted, “must be prodded.” Indeed, he tells them that by not putting themselves up for promotions, they are holding themselves back. “By the time a woman says she is ready, she was probably ready a year ago,” he said, adding that the company promotes women engineers at about the same rate as men.

Woods agrees. “Women tend to be ridiculously over-prepared for everything. But at a certain point, over-preparedness doesn’t get you moving forward. It doesn’t leave you open to other opportunities.” She suggests that women should be able to clearly define what type of job they want to do next. “They should be thinking about the next step even if it feels overwhelming.”

And “as scary as it seems,” she adds, women who do get promoted “should start signaling, at least to their bosses, that this isn’t the last thing they want to do. They should show they want to do a really good job in their current role, but that they also have ambitions.” In addition, she notes, men know that wandering around the office and chatting with their colleagues qualifies “as work. Talking to the boss, running into him or her at the coffee machine, having interactions – men understand that this is part of their work. Women don’t understand that. They think it’s a distraction from whatever they are supposed to be doing.”

Wharton management professor Matthew Bidwell suggests that there is “some evidence that women are held to a higher standard in the workplace than men, and that because women are stereotyped as less competent than men, any mistakes they make tend to reinforce those kinds of attitudes towards them as individuals. You can imagine that if this is the case, then it’s even riskier for women to take on that promotion.”

The Journal report was based on the comments of a task force set up to study the obstacles that women continue to face in the workplace. According to a McKinsey study quoted in the article, women get 53% of entry level jobs and “make it to ‘the belly of the beast’ in large numbers.” But then “female presence” drops sharply, “to 35% at the director level, 24% among senior vice presidents and 19% in the C-suite.”

The McKinsey study cited by the Journal article also noted that hiring and promoting talented women is important “’to getting the best brains’ and competing in markets where women now make most of the purchasing decisions.”