Many companies today are in various stages of digital transformation. But true digital transformation requires the courage to challenge entrenched beliefs within one’s organization. For example, insurance companies have always relied on a bedrock belief that insurance policies will always need human agents to sell them — until the Internet proved that consumers will buy them online. A company that wishes to stay one step ahead of competitors must learn to identify and question these entrenched “facts,” and discover how technology can disrupt them. The key is to create a “forgetting organization,” says Eric Clemons, a Wharton professor of operations, information and decisions.

Knowledge at Wharton recently spoke with Clemons about business transformation, the topic of one of the classes he teaches. What follows is an edited version of that conversation.

That’s not to say there haven’t been digital transformations before. Database management transformed the way political campaigns are run, transformed the way direct marketing is done. Communications networks and high-velocity, high-frequency trading changed the securities industry. But those are localized.

What makes today’s modern, digital transformation different is that it’s almost all-pervasive. In other words, it’s not transforming a part of the business. It’s transforming the structure and the strategy of the entire business.

“What makes today’s modern, digital transformation different is that it’s almost all-pervasive.… It’s not transforming a part of the business. It’s transforming the structure and the strategy of the entire business.”

Knowledge at Wharton: What’s the most important thing for companies to think about once they realize they’re not digitally transformed enough and they want to do it?

Clemons: The first thing — and a big thing — is that the meaning of “good enough” is different now. Budweiser was good enough, Miller and Coors were good enough, for decades, because beer was sold principally by advertising. The really profitable stuff now in beer or snack foods is niche market [products], which used to be too small for a company even to worry about. Niche market beer is now 15% to 20% of the market, and more than 15% to 20% of the profit. And suddenly, being Budweiser doesn’t look nearly as good as it did five years ago. That’s probably the first thing to realize, is that the meaning of “good enough” has changed.

Knowledge at Wharton: How do you start the process of digital transformation?

The one thing everybody knew — but me — was, you couldn’t change either distribution or product. That’s really very funny. And I started designing, in my head, on the fly, alternative products and alternative distribution systems, and suddenly, they knew they were out of date. They knew there was going to be somebody who was going to be competing with them online — they didn’t know it was going to be [Geico]. So, it’s very difficult to take a team that’s been remarkably good at something for 25 years and expect them to find [ingrained beliefs that could be disrupted] — without help.

“The idea is to explore all of the things that you are sure are right and think about which of them would be transformative if they were wrong.”

Knowledge at Wharton: For a leader who gets the need for digital transformation, and who wants to push that change through their organization, is there a blueprint they should follow?

Clemons: I’ve done that a couple of times … I’ve done it for banks. I’ve done it for 4-star generals. I’ve done it for heads of the travel industry. The idea is to explore all of the things that you are sure are right and think about which of them would be transformative if they were wrong. You can’t tell somebody what’s going to happen, but you can help somebody discover … vulnerabilities or changes.

For instance, when we did this [project] for the London Stock Exchange in the late 1980’s, the question was, “why would somebody want to trade off exchange?” Not, “what happens if they do?” [but] “why would somebody want to?” And then, you can get to what would happen if they did. The idea of high-velocity, high-frequency trading to capture [fractions of] a cent — much, much smaller than the bid and ask margins in the eighths we used to deal with — became something we could focus on.

Knowledge at Wharton: What are some examples of companies that have done digital transformation very well?

Clemons: Days before the airline industry was formally deregulated, … a Wharton grad, a guy named Robert Crandall [who later became CEO], called a meeting of the entire staff at American Airlines, and he said, “I don’t know the first thing about selling or operating in a deregulated environment.” Dead silence. And then, he said, “but let’s figure it out together. We will know before anybody else.”

[Since then,] American has been the best digitally managed firm — long before the Internet. They had customer relationship management, frequent flyer programs, first. They had an affinity card. They had differential pricing, constantly varied, real-time re-pricing algorithms. And they’re now … a very large, very successful airline.

Capitol One was run essentially by officers who got the great idea — when they were consultants, not when they were with the bank — [to transform] their strategy. Everybody wanted to get marketing costs down as low as possible. Everybody wanted economies of scale. Capitol One decided that in a digital age, they could find the most profitable customers on the planet, and they did. Their perfect customer is called a high-volume, high-balance revolver. It’s a guy with $5,000 or $10,000 on his card, never pays it off quite completely. You get finance charges from him that maybe make him 150 times more profitable than average.

“Creating a forgetting organization is not easy…. Do it by finding the things that everyone knows can’t be changed, and then, seeing what happens if they were changed anyway.”

Knowledge at Wharton: And they were able to do that because of a digital transformation?

Clemons: The digital transformation they had was in their strategy. One of the things they did was to introduce a screening mechanism. They offered you a balance transfer product. It was somewhat inconvenient to use. The only guys who were willing to put the time in to do the balance transfer just to get a lower interest rate were the guys who had high outstanding balances. Otherwise, why would you care what your interest rate is?

In fact, differential service to attract guys you want is a complicated thing.  Capitol One did that better than anybody else. They did profitability analysis before anybody else understood it. They developed data mining techniques to figure out who was about to go broke or who should be cross-sold a new product or who should be offered a car loan. They did a spectacular transformation of strategy.

Knowledge at Wharton: If you’re the CEO of a company, how should you be thinking about digital transformation?

Clemons: I loved the fact that [American Airlines’] Bob Crandall started his discussion on the response to deregulation by saying he didn’t know the first thing about it. He was going to forget everything he knew about running a regulated airline, and figure out together with the rest of the company what he should do. Creating a ‘forgetting organization’ is not easy. You know, it’s very rare that you’re handed something as profoundly attention-getting as total deregulation.

The insurance industry, again, is an example I like because when I was working for a team reporting to [an insurer’s] board, we had to drop all of the outdated ideas. I remember being told they were going to focus on cutting costs, and they were going to get rid of every bit of data that they no longer used. I was terrified, because insurance is a data intensive industry. I couldn’t get them to understand what was wrong with what they were doing. What I finally had to do was to say, “what are the things that everybody else knows that I don’t?” And the response was, insurance will always require an agent. Agents are stupid. Therefore, products have to be simple, which basically means you can’t change product or distribution, both of which are nonsense.

But the idea that you can’t change product and you can’t change distribution was totally ingrained. And first, you have to get that stated. You have to get it out on the table. And then, you have to design mechanisms to forget it.  It’s a really disruptive process. It’s not a good idea to do it entirely within the firm, or among firm leaders, because they’re going to be spectacularly unpopular by the time you get done. So, the idea is to create the forgetting organization with an individual whose contribution you can then forget later. But do it by finding the things that everyone knows can’t be changed, and then, seeing what happens if they were changed anyway. 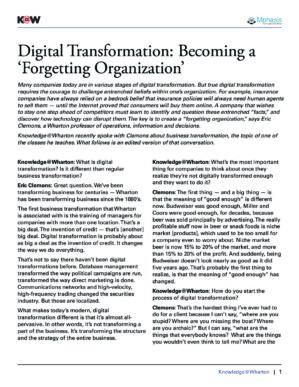