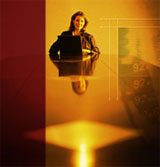 Everyone knows that men, on average, earn more than women. Indeed, says David Gaddis Ross, a management professor at Columbia Business School, women worldwide earn “9% to 18% less than men who have the same job description and equivalent education and experience.”

However, Ross, along with colleagues Michael Dahl of Aalborg University in Denmark and Christian Dezso of the University of Maryland, decided to study what happened to that gap when male CEOs had a daughter. They chose Denmark as their research site because it is considered an egalitarian society and because the Danish government keeps detailed statistics on the business community, including individual companies, as Ross explains in an article on the Columbia Business School website.

The researchers found that a short while after the daughters were born, the gender wage gap at their firms decreased, yet the birth of a son had no impact on that gap. In addition, “first daughters who were also the firstborn children of a CEO had a bigger effect than subsequent daughters, decreasing the gap by almost 3%. First daughters who were not the firstborn children had a less dramatic but still significant effect, closing the gap by 0.8%. The overall reduction in the gender wage gap was 0.5%.”

The gap was reduced the most at small firms — those with less than 50 employees — which the researchers say is because “CEOs at smaller firms are typically more directly involved in making decisions that affect the pay of individual workers than CEOs at much larger firms.” What had an even more significant impact was the education level of the women employees. Since most CEOs went to college, Ross says in the article, they would probably expect their daughters to do the same. These CEOS would then “be more apt to see their more educated women employees as resembling a possible future incarnation of their daughters.”

According to Wharton management professor Stewart Friedman, “What is interesting about this finding, which doesn’t seem surprising, is how it shows that business issues can really hit home when they are personal. For years, I have observed anecdotally that male CEOs are more likely to adopt family- and women-friendly policies when they have some direct experience as fathers that compels them” to see the discrimination their daughters can face in the business world.