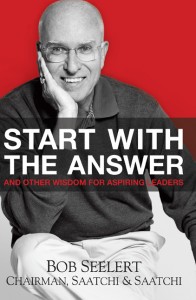 Bob Seelert, non-executive chairman of global advertising agency Saatchi & Saatchi, has been CEO of five companies in three different industries, and a member of the boards of directors of nine companies in the U.S., England and France. In 2009, he wrote a book titled, Start with the Answer: And Other Wisdom for Aspiring Leaders.

During a recent presentation at Wharton, he saved his audience the expense of buying the book by passing out a pamphlet that summarized its key points into what he calls “Bob’s Wisdom for Building a Successful Career.”

During his talk, he elaborated on several of those points:

— When interviewing for a job, know more about the company than the person who is interviewing you does. “It’s easier today than it was in my time because of the search tools on the Internet,” he said, adding that you should also perform a self-assessment of what your strengths are, and then articulate why you will be a great contributor to the company’s future.

Not that this will prepare you for every situation. Seelert remembers interviewing early on with a product manager at General Foods. “He looked puzzled and was shaking his head and finally said, ‘I just don’t understand how someone like you is going to compete with a hot [shot] like me.’ That wasn’t what I expected the opening line of the interview to be. But I was ready.”

— Once he was on the job, Seelert was assigned to write a memo about the performance of a new product that was scheduled to go national in three months. “I worked away,” he said. “The memo came back to me all marked up in red.” When he went into his boss’s office to discuss this, he was told: “I know you’re a smart guy, Bob. And I want you in my group. But I also want you to realize that this memo will be seen by a lot of people who don’t know who you are. This memo will form an impression of you, and we want that impression to be the best it can be.” Or, as Seelert put it, “Every memo you write is an ad about you.”

— Time: There never seems to be enough of it. “But the interesting thing about time is that we all have the same amount,” he noted. At Saatchi & Saatchi, “we ask our people every three months to put together their 100-day plan, the six to eight things they want to get accomplished in the next 100 days. Start with a verb, such as ‘Win the XYZ account,’ or ‘Complete the XYZ analysis.’ It’s because we view success in the long term as the result of a series of short-term accomplishments.” The takeaway, he added, is: “Focus on the important instead of getting distracted by the urgent.”

— Make your own luck by getting ready to take advantage of opportunities when they come along. Seelert pointed to a story told by Woody Hayes, coach of the Ohio State football team from 1951 to 1978, about a fumble that Ohio State recovered in the other team’s end zone when there were only minutes left to play. Ohio State, which at that point was behind, then went on to score a touchdown and win the game. Reporters were coming up to Hayes and telling him how lucky he was. “He looked at them and said, ‘Lucky, my ass. There was nothing lucky about it. We practiced stripping the ball out of the other guys’ hands. We practiced recovering fumbles.'”

“Ever since then, I have never believed in luck,” said Seelert. “You have to think to yourself: ‘How can I make my own luck?’ Maybe you develop some rudimentary language skills for when an opportunity to work abroad comes up.” Whatever it is, “you need to think about how you can be selected at the moment an opportunity becomes available.”

— The difference between management and leadership: “Management is all about planning, directing, controlling and measuring. Leadership is all about standing for something and then going into the fray under that banner,” according to Seelert. “So the big question to ask yourself is, what is it that you are going to stand for? What will people see in you that [means] they will reliably know who you are and what you stand for?” What are the values that will carry you through in your career?

— And finally: Consider doing self-evaluations. “I call it footprints in the snow. It’s the things that wouldn’t be happening as well if you weren’t there,” Seelert said. For example, in 1997, he was recruited by Saatchi & Saatchi following the board’s ouster of the founding brothers, who then went on to set up a rival agency. “Saatchi & Saatchi was losing money, burning through cash. Employees were thinking about leaving. I turned the company around in five years. How did I do it? By stabilizing the clients and the staff, refinancing the company, coming up with a strategy for de-merging the company, and hiring a person — Kevin Roberts — to work alongside me. We became great partners.” In 2000, the agency joined the Publicis Groupe, a Paris-based global marketing company.

“You don’t need many footprints,” says Seelert, “but you do have to be leaving them behind if you want to make it to the CEO job.”