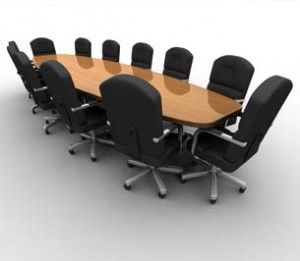 Despite the 2008 crisis in the financial markets, bank directors “are still rarely if ever held responsible for their poor conduct,” wrote Steven M. Davidoff, a professor at the Michael E. Moritz College of Law at Ohio State University, in a recent New York Times article. Davidoff based that view on a study he conducted with two other researchers — Andrew Lund of Pace University School of Law and Robert Schonlau of Brigham Young University’s Marriott School of Management.

Shareholder activism at financial institutions is limited, and only seven national commercial banks faced activist campaigns between 2006 and 2010, Davidoff pointed out in his article. But in the highly regulated banking industry, the government can urge board overhauls, as it did with Bank of America and Citigroup, he added. Director turnover was low even at banks that received government bailouts under the Troubled Asset Relief Program, the study found. In fact, the biggest driver of turnover was mandatory retirement policies once directors reached the age of 70.

How much power do shareholders at banks really wield? Banks are no different from other companies in how directors are elected or removed, says Wayne Guay, Wharton accounting professor and an expert on corporate governance. “Regulators have been trying for many years to develop new rules that would allow shareholders greater access to nominating directors, but these regulations have moved slowly.”

Driving board changes is not easily done by shareholders. To begin with, an economy-wide crisis period is probably one of the most difficult times for shareholders to figure out which executives/directors, if any, were not doing their jobs properly, Guay notes.

It is also not easy, from a practical perspective, for shareholders to determine which of the eight to 10 directors on a bank board need to be replaced, says Guay, adding that it is difficult to get data on individual performance. At the same time, replacing all of the directors too quickly could undermine the experience of the board in understanding the bank’s problems and how they might be fixed.

The “naïve view,” according to Guay, might be that the directors and executives at all the poor performing banks must have done something wrong and should be fired. “But, that’s neither realistic nor accurate,” he says. “There is little, if any, empirical evidence that this recent financial crisis was caused by a systemic breakdown in corporate governance. Further, keep in mind that banks have certainly done a very good job in recovering post-crisis … [while] maintaining many of the directors that were on board during the crisis.”

In his Times article, Davidoff writes that based on his study’s findings, reforms that are centered on boards and depend on a labor market for directors “are doomed to fail…. Shareholders will have to express their disapproval of directors by cutting their investments rather than actively seeking to unseat them.”