At one time, an initial public offering was considered de rigueur for growing companies — a seemingly endless availability of capital plus the panache conferred by a public listing helped spur an avalanche of filings that swelled to more than 600 in 1996. But a spate of regulatory burdens — like the Sarbanes–Oxley Act – raised the costs of going public, helping to curtail IPOs while spurring more interest in alternative capital sources, say experts from Wharton and PricewaterhouseCoopers.

Can Companies Adapt to Changes in the IPO Environment? 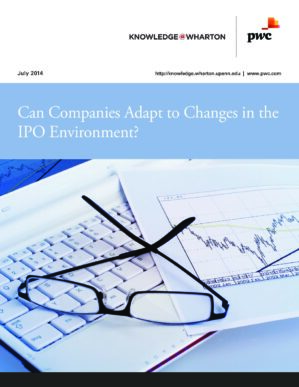