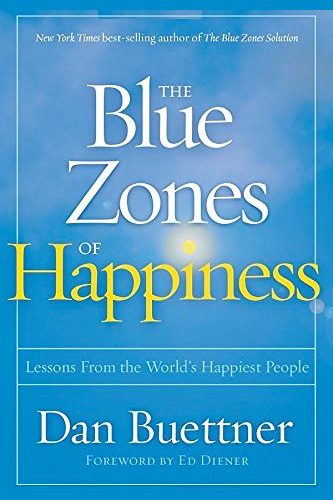 With 15 years at National Geographic, journalist Dan Buettner developed an unusual expertise in finding the most extraordinary populations on earth, then doing a bit of reverse-engineering to figure out what made them so special. His work led him to explore the secrets of happiness, which scientists measure in terms of life satisfaction. His new book, The Blue Zones of Happiness: Lessons From the World’s Happiest People, offers a blueprint for what makes life more fulfilling, less stressful and just plain better. He recently joined the Knowledge at Wharton show, which airs on SiriusXM channel 111, to share some of his insights. Following are key points from the conversation.

Happiness Is Made, not Born

There’s a “queer genesis” to happiness, Buettner said. It doesn’t just evolve on its own, and the best place to start is at the macro level. Nations need an established history of economic stability and security.

“There were usually enlightened leaders, a generation or two ago, who [took] the focus off of just economic development,” he said. “Economic development is important for poorer countries, but it’s not that important for rich countries when it comes to happiness. The policies that set into motion an upward spiral in well-being are making sure kids have enough education so they can read, and educating women, especially mothers. [Those] mothers have fewer children who are better educated, healthier and grow up to be more productive, better parents and make better voting decisions so that the next generation’s even better.”

Countries also need to invest in public health care with a strong focus on prevention that catches chronic problems before they become “six-figure events,” Buettner said. “Health and happiness are inextricably linked.”

A sense of equality and trust, particularly in government institutions, is also a necessary ingredient for happiness, he noted.

“Health and happiness are inextricably linked.”

“My central argument when it comes to happiness is that if you try to get happier, it’s a recipe for neurosis. That usually doesn’t work. But you can set up your environment so you’re more likely to be happy,” he said. The workplace is an example. Finding a work buddy, making overtures to others and having meaningful conversations are some ways to increase job satisfaction, regardless of whether you like your position or your pay.

‘Stack the Deck’ with Happy Friends

Your social network is a critical component of happiness. Numerous studies have highlighted the dangers that come with isolation and loneliness, including depression, poor health and even thoughts of suicide. To be sure, friends are important. But it’s also important to choose them wisely, Buettner said.

“A lot of us just blunder into our five best friends. They’re left over from childhood, or we met them in college, or we happened to work with them one day,” he said.

Buettner suggested taking a “cold-eyed” inventory of friendships. Perhaps it’s time to kick negative people out of your circle.

For every new happy person you add to your network, your own chance of happiness increases by 15%.

“Instead of focusing on some self-help course, go out and think about who you know and proactively befriend them,” he said. “That’s one domain you can control.”

Why Costa Rica, Denmark and Singapore Get It Right

In his research, Buettner found three specific places that seem to be the happiest on earth. They are the Cartago province of Costa Rica, Denmark and Singapore.

In Costa Rica, the climate is spring-like all year long and some of the world’s best coffee grows in the verdant central valley. There’s no army, and every citizen gets a free health check-up from a nurse practitioner every year. Costa Rica also has the highest literacy rate in Latin America.

“This is a place where religion, family and social interaction are the main values, unlike trying to get ahead, or financial security or status,” Buettner said. “Their cities are set up so they’re bumping into each other all day long. They walk to the markets, where they have conversations with people.” Costa Ricans report a high level of life satisfaction, he said. “If you live a life where you’re just pursuing your goals and working 50 hours a week and not really enjoying the journey, you want to pay attention to how Costa Ricans live.”

Denmark routinely tops the list of happiest place on Earth. In fact, that phrase is listed on the country’s official website. Danes get free health care for life, free college tuition, 10 months of paid maternity leave and a guaranteed retirement. These generous social programs allow citizens to ponder a higher sense of purpose.

“Especially since ambition and status are not celebrated there, they’re in a position to take a job for passion,” Buettner said. “They’re spending their days making wonderful furniture, design, architecture, not some job they take because they need health insurance. They’re spending most of their days doing something they enjoy.”

“A lot of us just blunder into our five best friends. They’re left over from childhood, or we met them in college, or we happened to work with them one day.”

Life in Singapore is far more structured but just as satisfying, Buettner said. It’s a place where the path to success is neatly laid out. Financial security, a sense of pride and strong family ties are at the end of the long road.

“If you want to be happy, you have to have what I call a diversified portfolio of life satisfaction and good daily emotions and purpose,” he said. “The Singapore experience teaches us that, yes, there is a brand of happiness where if you get rich and you think you’re happy, you are.”

Just Pack Up and Move

If you’re living in an unhappy place, move.

“There’s no other intervention anybody can tell me about that has that dependable and lasting impact on happiness than your geography,” Buettner said.  “Of course, it’s important to have food and shelter and health care and some education — that’s all kind of the ante, the foundation. You need meaningful work. You want to be married to the right kind of person. You want to have a feeling of getting back. But the most important variable in that happiness recipe, the ingredient with the most statistical variability, is where you live. If you live in an unhappy place, the best thing you can do is move to a happier place.”

The average American moves 9.8 times in his or her adult life, according to the U.S. Census Bureau. If that’s not enough motivation to move, consider a study by economist John Helliwell on the well-being of immigrants to Canada. After one year in their new home, the immigrants he followed reported greater levels of happiness.

“Canada’s a very happy place. It’s one of the top seven in the world,” Buettner said. “He found that after just one year, these people didn’t change … their religion, their education level, their sexual orientation — all they did was move.”

Buettner created the Blue Zones Project with a team of 200 people working in 23 American cities to help make them happier places to live. The project drills down into quality-of-life issues at the local level. That means working with city leaders to help craft policies that build better communities.

“If you want to be happy, you have to have what I call a diversified portfolio of life satisfaction and good daily emotions and purpose.”

“Places like San Luis Obispo, California; Boulder, Colorado; Portland, Oregon. In all these places at a certain point, enlightened leaders turned away from just more development. They turned the economic energy inward to build a vibrant downtown. They’ve done things like eliminate billboards. When you think about it, nobody likes billboards except the advertiser. We don’t need to be taunted to buy stuff we don’t need and eat food that isn’t all that good for us,” he said.

“We bring these policy bundles to city councils and mayors and city managers, and we help them come to consensus,” Buettner said. “Most of the time, they don’t even realize that these policies can yield healthier, happier populations. Just showing them that and then bringing them to consensus on what’s feasible in this community and what would be effective in this community, it takes about four hours.”

The best ideas rise to the top, and a team member sticks around to help implement them.

“The short answer is yes, it can be done,” Buettner said. “We just have to shift the focus of our efforts away from trying to change individual behavior, which never works in the long run, to shaping people’s environment.”