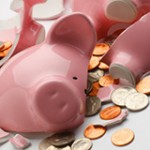 This week, in a seemingly endless stream of bank fraud news, UBS agreed to pay $1.5 billion in a “settlement” to various regulatory agencies in the United States, the U.K. and Switzerland. The fines are part of a settlement of charges alleging the Swiss bank conspired to manipulate the Libor interest rate.

Last week it was HSBC getting nailed for even more — it now it holds the world’s record for the highest bank settlement ever reached – as the British Bank agreed to pay $1.92 billion to U.S. authorities. The charges against the bank were about as serious as it gets – HSBC stood accused of laundering billions of dollars for terrorists and drug kingpins.

On the surface it sounds like quite a whipping for HSBC – but it was not even close to one. For one thing, the settlement amounts to about six weeks of earnings, according to estimates. That is a mere slap on the wrist for such a huge institution. For another thing, no criminal charges were brought against the bank or any of the individuals involved. The official reason, as a column in The New York Times translated it: “Criminal charges could jeopardize one of the world’s largest banks and ultimately destabilize the global financial system.”

Notes Kent Smetters, Wharton professor of business economics and public policy, “I think it shows that the government still does not have a game plan for dealing with too big to fail, despite the passage of Dodd-Frank. As a nation, we have a lot of work to do on properly regulating systemically important institutions if we even let them get away with funneling money to terrorists and drug dealers.”

The HSBC settlement led to countless citations in the press that banks have gone from being “too big to fail” for fear of creating another Lehman moment (the investment bank failure thought to have triggered the world financial crisis) to “too big to jail.” The phrase was first mentioned by Simon Johnson, a former chief economist at the International Monetary Fund and a professor at MIT, earlier this year. At that time Johnson noted that “Among the fundamental principles of any functioning justice system is the following: Don’t lie to a judge or falsify documents submitted to a court, or you will go to jail. Breaking an oath to tell the truth is perjury, and lying in official documents is both perjury and fraud. These are serious criminal offenses, but apparently not if you are at the heart of America’s financial system. On the contrary, key individuals there appear to be well compensated for their crimes.” At the time, Johnson was referring to the so-called “robo-signing” settlement regarding large-scale, fraudulent mortgage foreclosures in the U.S. But the latest offenses are in the same category of violation.

Reducing the threat of criminal prosecution for the largest banks takes away a huge deterrent, the Times points out — “the threat could lose its sting.” That’s putting it mildly compared to what other critics say: If the downside of laundering money for terrorists and drug cartels – or manipulating Libor — is an easily absorbed fine, a simple cost of doing business, then regulators are actually encouraging fraud because banks have shown an aggressive tendency to push through loopholes.

Says Neil Barofsky, a former special inspector general for the Troubled Asset Relief Program, the Justice Department’s “actions with regards to HSBC are beyond unfair: They are downright terrifying for weakening the general deterrence for megabanks, both foreign and domestic, which could rationally interpret yesterday’s actions as a license to steal.”

Regulators want to avoid another financial disaster, naturally. But if some banks are too big to fail, and if, as Smetters points out, new banking regulations fall short of preventing future, systemically important bank failures, then the one lever that may remain is to break banks up and make them smaller.

For more discussion of breaking up megabanks, see this Knowledge at Wharton article:

Should Big Banks Be Broken Up? Yes — or Maybe

For more insight into Simon Johnson’s views on the financial industry, see this Knowledge at Wharton interview: The Coming Meta-Boom and Meta-Bust — One Economist’s View