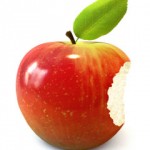 According to an article in The Wall Street Journal, the decline lowered Apple’s recent $600 billion market capitalization by more than $50 billion. (To put that in perspective, the Journal notes that Hewlett-Packard’s total market cap is $48 billion.) But in a dramatic turn on Tuesday, the company’s stock price bounced back by 5.1% — its biggest single-day dollar increase — to close at $609.70, adding back nearly $27.5 billion in market capitalization. (As of 3:00 p.m. today, the company’s stock was trading at around $611.)

Despite the rebound, analysts have been searching for reasons behind Apple’s initial steep price decline — with some speculating that the stock simply came down because it was overvalued and seemed “like a helium-filled balloon,” as one Wall Street Journal columnist wrote. Don Huesman, managing director of the Wharton Innovation Group, points out that the company’s stock price has nearly doubled over the course of a year. “That’s not based on reasoned analysis — that’s emotion at work,” he says. “The company isn’t twice as promising today as it was a year ago, even given an untroubled leadership transition.”

Others have blamed rumors that Apple plans to launch a cheaper “mini” version of its iPad, which some analysts predict could cannibalize the company’s sales, according to the Journal. “Apple’s stock price is based on forecasts of its earnings far into the future,” notes Wharton finance professor Jessica Wachter. “Because its price is based so much on [the company’s] future growth, even small revisions in expectations of these growth rates can cause very large stock price changes.”

Wharton operations and information management professor Kartik Hosanagar suggests that the recent decline in the company’s stock could be “partly due to profit-taking on the part of some big investors, and partly due to the [U.S. Department of Justice] lawsuit against Apple,” announced on April 11, which alleges that the firm conspired with publishers to raise e-book prices. (Apple has since denied the allegations.)

Because the price drop was so dramatic — as the Journal notes, it was just shy of the 10% change that analysts would call a “correction” — investors may be losing at least some of their confidence in Apple, observers say. But Hosanagar disagrees. “Personally, I would be cautious about over-interpreting such short-term trends. I don’t see investor confidence [in Apple] waning by any means.”