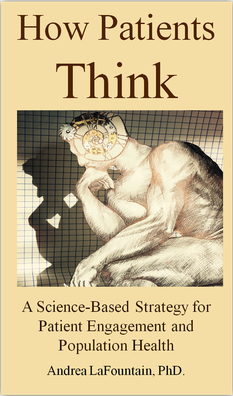 A new book by Andrea LaFountain, CEO of Mind Field Solutions, looks at the science of patient behavior to answer the questions that big data cannot. LaFountain stopped by the Knowledge at Wharton Show on Sirius XM channel 111 to talk about the book, How Patients Think: A Science-Based Strategy for Patient Engagement and Population Health.

Knowledge at Wharton: In this age of technology and big data, why is there still that disconnect between healthcare providers and patients?

Andrea LaFountain: You kind of answered the question. Big data can be great, but it can also be an enemy depending on how we use the data. There’s an overreliance on what we call “claims data.” We look at the activities of the patient. We can see whether they are visiting the doctor or filling prescriptions, but it doesn’t give us the explanation behind the activities that we’re seeing. That’s what’s missing.

The data can show us the results of their decision. It doesn’t tell us why they are making the decision. So we can look at the data, and we can see that 26% of women with breast cancer stop taking their treatment early.

Knowledge at Wharton: Is the problem with taking medication and taking it all the way to the end of the prescription?

“We can look at the data, and we can see that 26% of women with breast cancer stop taking their treatment early…. But how are they making that decision? That is not available in the data.”

LaFountain: That’s definitely a major problem. But for some diseases, good health outcomes require more than just taking medication. When you think of diabetes, for example, we have to monitor diet and exercise as an integral component of that. In fact, we did research with over 1,000 patients with Type 2 Diabetes in the United States and some people actually believe that they are managing their diabetes well just because they take their meds every day.

Knowledge at Wharton: You have a remarkable statistic in the beginning of the book: $2.2 billion spent on healthcare back in 2008 and $1.2 billion wastage that could be eliminated. I think the majority of people understand that there is a level of waste within the healthcare system, but understanding the magnitude will frustrate a lot of people out there.

LaFountain: And rightly so. We do need to tackle that. The wastage is coming from a couple of different places. One, it’s where we spend money targeting support programs to people who don’t need the support. The vendors, to be honest, are really at the root cause of this problem. Vendors say that they have patient support solutions. You might have even experienced some, where you have a health coach phone you.

I’ve experienced that through my husband’s employer, a coach calling me. I’m as fit as a fiddle. I don’t need a health coach and she’s asking me, “What do I want to change about my health?” I said nothing. Now we still spent nine sessions of telecoaching on the line. I did it because I wanted to get some competitive intelligence as to what was contained in the program.

My husband was also called and offered into a diabetes program. He’s not diabetic. If he were, he would be taking the measures himself. That’s who are consuming a lot of resources there that we don’t need to spend. Now on the other hand, these vendors are telling these large employers, “We’ll take the top 20% of your employees.” Or if they’re brave enough, they’ll say, “We’ll take the top 40%.” But it’s the bottom 20% that drives 80% of the cost.

United Healthcare published some statistics a couple of years ago. The bottom 22% of their patients drive 79% of their cost of care, but yet nobody wants to provide the additional support services to that 20%. The reason is, they say, they are beyond behavior change. Well, if you can’t change behavior in the patients who need to make the behavior change, then you shouldn’t be in the business of behavior change, period.

Knowledge at Wharton: The behavior change aspect of it is very interesting because as you alluded to before, there’s a piece of behavior that nobody has been able to seemingly figure out to this point. Going back to something we said a while ago, if you’re prescribed a certain amount of medication that is either preventative or designed to cure you of something, whatever it is, the doctors want you to take it to whatever level that is. I’m sure that there is a significant amount of people who will take 75% of a prescribed medication, and that other 25% is not used. Or there is the other issue with the prescription itself being more than needed in the first place.

LaFountain: The typical number that’s thrown around is 48% of patients are not taking medications as prescribed. Now it’s up as much as 75% in conditions like asthma. With asthma, patients have a misconception that it’s an acute condition. You treat it when you feel the symptoms and don’t treat it when you don’t feel the symptoms. That’s not the right way to manage asthma.

Another interesting piece of research we did at Mind Field Solutions was with ADHD and parents of children age six to 12. The biggest factor there was when parents did not understand that it was a biochemical basis behind ADHD, then they didn’t treat beyond six weeks. When they knew that it was biochemical, then they treated with pharmacological medication. That’s a very rational way to think. So what we need to do is we need to find out, do they understand correctly that it’s a biochemical condition? Because if they think it’s behavioral, it doesn’t make sense to them to go with a biochemical solution. So we need to figure that out.

“It’s a huge battle. It would be easier if people rallied around a common cause, and that common cause needs to be health outcomes.”

Now we have a diagnostic tool in ADHD that with one question, we can figure that out. We ask the parent, “How much do you agree with this statement: I can manage my child’s behavior through discipline alone”? If they say agree, strongly agree or even if they are neutral on that, we know that they are not going to maintain treatment pharmacologically. That makes entire sense. So now, it makes the solution obvious. The solution is an education to that parent that there is a biochemical disorder.

We can understand why parents don’t get that because the classic definition of a sick child is a fever, maybe a rash and vomiting. There aren’t any of those symptoms. So the mother doesn’t classify the child as “sick.” It’s a behavioral manifestation of disease, so they take a behavioral interpretation of the disease, and therefore, they look for the behavioral solution to the problem. So it all makes sense when we get in under the hood as to what is actually driving the decision.

Knowledge at Wharton: How do you start to delve deeper into these behaviors and make the understanding of them at a much greater level, not only amongst the people, but amongst the companies and the members of the medical community, whether that be the doctors or pharma, so that we’re all on the same page, and a lot of this waste can be taken off the books.

LaFountain:  Where all good research starts is with good old-fashioned looking at the literature. I don’t mean you log on and check a few resources on Wikipedia. I mean, you’re getting into the heart of the science of what’s going on. There’s a massive body of literature in health psychology. Psychology itself is explosive, but even if you narrow it down to health psychology and then you look to cognitive science, as well, and cognitive analytics. And you can even go deeper into the neuroscience of decision making. For whatever reason, that science has been ignored in healthcare. I don’t know why it’s been so ignored. It’s frustrating.

With my background — I have a PhD in cognitive neuroscience — I know that that literature is out there and I’m very familiar with it. I love that literature. I can see the answers in that literature. So that’s where we have to start. Then we have to cull through it and test it out. Going back to that ADHD example — I knew, for example, just because of my field of expertise, that there’s a whole psychology on how does one interpret the understanding of disease? What is somebody’s mental concept of sick? Some people say they are sick when they have a headache, and they take a day off work. I talk about in my book about my dad who, God rest him, passed away a few years ago, and never took a sick day in his life.

Why do we have those very different concepts of sick? How does that then challenge us in managing our health behavior? We don’t have to reinvent the wheel, but we’ve got to use the science that’s out there. And then, if we’re serious about progressing this as a field of interest, then we have to progress the field of science, too, through further study and application….

But this is another problem in current methods of behavior change. I have not yet met a vendor who has tried to falsify their own work. Yet they are comfortable going into a company, a large employer, and charging $8 billion, which is what companies pay on behavior change programs each other. That number is four years old. It’s probably more like $12 billion to $15 billion now.

These vendors are not aiming to falsify. If their genuine concern was to translate the impact into health outcomes, then they ought to be on the docket to prove that they are having an impact at a health outcomes level. Why are we seeing more diabetes, more pre-diabetes? Why is the average HbA1c, which is the marker for diabetes control, getting worse every year, even though we’re spending more every year? If these programs seriously work, we would see a healthier nation. We’re getting sicker and sicker every year….

We need to stop putting behavior change programs into the remit of marketing. Now I’m not saying anything that’s a disservice to marketing. Marketing has a tremendous role to play in healthcare, but one role that it doesn’t need to be playing is with behavior change. If you had a loved one who needed some good counseling, some good therapy if they were depressed or if they were going through marriage problems, you wouldn’t send them to a marketer.

That’s what we’re doing with critical problems that have more of a consequence on the patient. When diabetic complications go out of control, there’s massive consequence with cardiovascular disease, heart attack, the number one reason for non-traumatic amputations, the number one cause of blindness — these are heavy consequences and they need a scientific approach behind them….

I’m trying to just get the general market educated on the need for the scientific approach in patient management, which was the whole purpose of the book — “How Patients Think.” It’s a tool to bring that level of awareness into just the core business of healthcare.

Knowledge at Wharton: I would think that even writing this book and just trying to bring that message to the market, as you said, is a battle in itself.

LaFountain: It’s a huge battle. It would be easier if people rallied around a common cause, and that common cause needs to be health outcomes. A lot of it focuses on the cost of care, but the costs of care will manage themselves, if we manage outcomes.